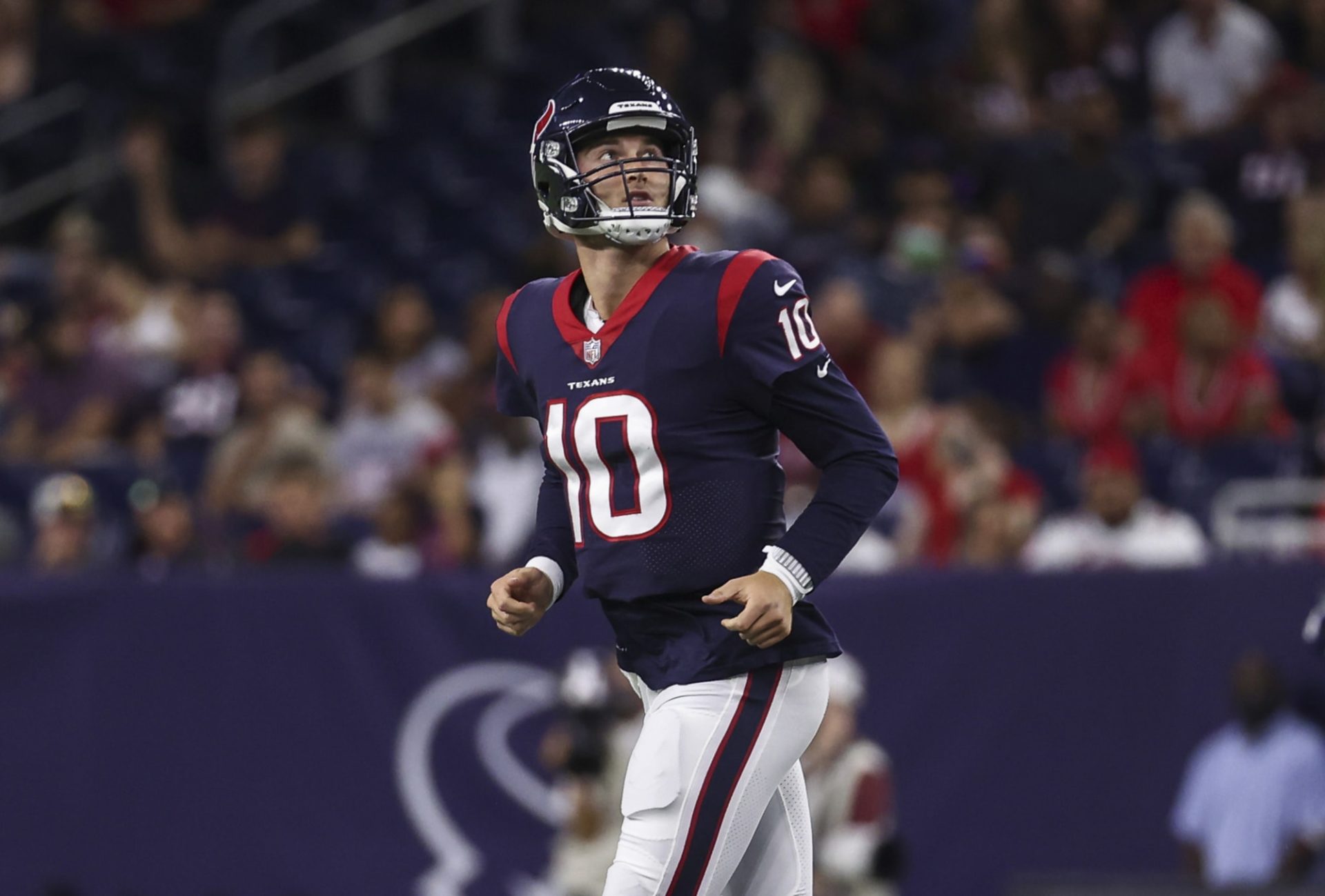 We’re fading rookie QB Davis Mills as we break down TNF props for Texans Panthers in the kickoff to Week 3.

The third-round rookie QB out of Stanford makes his first career start after relieving an injured Tyrod Taylor in last week’s loss to the Browns. He was inefficient, though not a disaster, and things are about to get tougher against the upstart Panthers’ defense.

We’re coming off easy article cashes on both SNF and MNF, so let’s start the week off right with another winner.

We don’t have a ton of data to go on, but here’s what we’ve seen so far from Mills:

He showed a willingness to take downfield shots both in college and in his debut last week but hasn’t found much success, as his abysmal YPA in the pros can attest.

We also saw the kinds of mistakes we’d expect from a third-round rookie QB.

As Carolina preps for Houston:

Davis Mills made some impressive throws, but you’re going to get a handful of freebies with young QB. Dangerous throw, in which the WR plays DB to prevent the INT.

A broken play follows, and that’s not uncommon when you have a new QB take over. pic.twitter.com/4VajBTTXNn

Look for the Texans to hide their rookie QB as much as possible and shorten the game with a heavy dose of the run game.

Lack of pocket awareness and inaccuracy have been on full display in MIlls’ short NFL stint so far, and that doesn’t set up well for him in a brutal matchup.

If this were merely an average matchup, I might pass on this play at such a low yardage number, but the early evidence suggests that the Panthers might truly be an elite defense this year.

It’s early days, sure, but they’ve been trending up since last year, allowing 170 average passing yards over their last five games, keeping even the likes of Aaron Rodgers and Drew Brees to 200 yards or less.

They might have the best pass rush in football, so don’t expect Mills will have much time to dial-up many deep shots to the likes of Brandin Cooks.

The projected pace sets up well for us too. Panthers’ opponents are averaging 53 plays per game so far, tied for second-fewest in the league, while the 43.5 point total is the third-lowest on this week’s slate.

What About Garbage Time?

“But Cort,” you say, “the Texans are +8-point underdogs, and he can easily get there in garbage time.”

That’s usually the argument against these kinds of bets, but the historical data just doesn’t bear it out. When we’ve previously looked at the effect of implied win probability on QB passing props, we actually found the opposite to be true.

Historically, QBs who are sizable-to-heavy underdogs go under their passing yardage prop between 56 and 61% of the time.

The explanation? It’s likely that oddsmakers are over-adjusting for the projected game script, or as the author of that piece puts it —  it’s possible teams are underdogs because their QB is bad.

That could certainly be the case tonight. Perhaps we don’t have enough on Mills to call him a bad QB just yet, but there’s a growing body of evidence that the Panthers’ defense is insanely good.