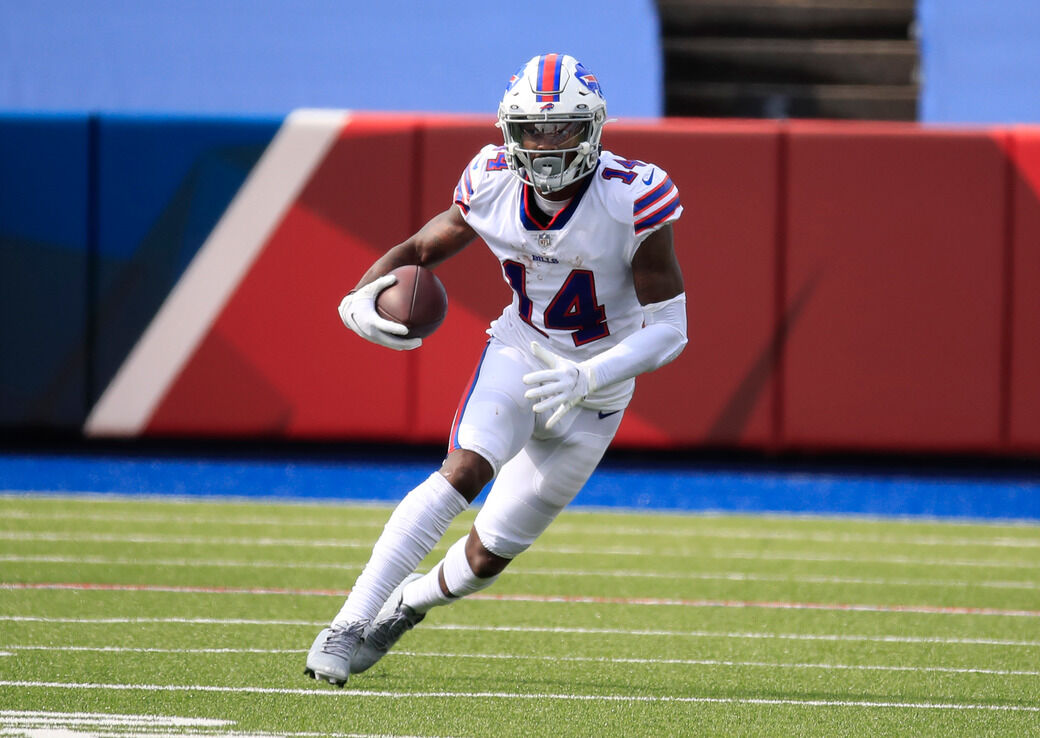 An electrifying Week 3 NFL slate awaits us, and we’re bringing you two convincing props for Week 3.

After an unpleasant Thursday Night Football experience put on by the Panthers and the Davis Mills-led Texans, I’m expecting to see significantly better quarterback play this weekend.

I went 2-0 in this space last week, and Bet The Prop went 1-0 fading Davis Mills on TNF.

It’s time to take to the skies for a Week 3 Aerial Attack. Let’s jump into the plays.

Stefon Diggs has been a superstar since his arrival in Buffalo. Diggs set a new career-high with a remarkable 127 receptions last season, good for the 6th best single-season mark in NFL history. He only improved as the season went on, too.

The Maryland product finished the regular season with 7+ catches in each of his final eight games. After developing a strong rapport with Josh Allen, Diggs also closed the season averaging a lofty 9.1 catches per game during this stretch.

In 18 total games with the Bills, Diggs has hit this over in 12 games, good for a hit rate of 66.7%. However, it has become clear that Diggs goes as Allen goes in this offense. The table and chart below show Diggs’ reception numbers and Allen’s completion numbers in the first half and the second half of the 2020 season. 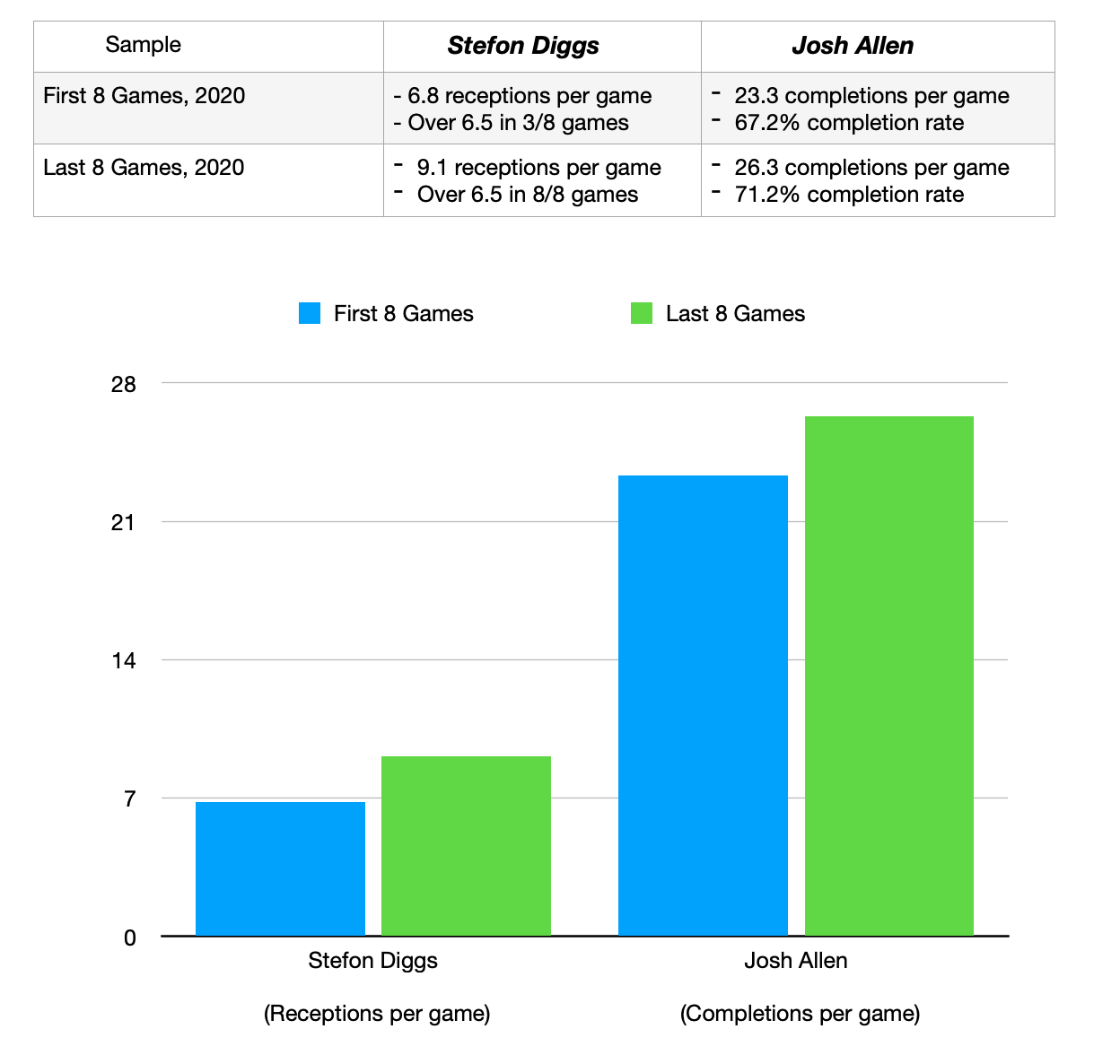 The jump in Diggs’ production and the jump in Allen’s production are no coincidence. The electric duo’s massive jump in production later in the 2020 season is indicative of what’s to come again this season.

The Washington Football Team will travel north to Buffalo for this Week 3 showdown. The Bills are 7.5-point favorites, which may seem like an unfavorable game script for Diggs, but this won’t hurt his outlook.

The Bills won nine games by more than seven points last season, and Diggs hit this over in 8/9 of those games. The star receiver managed 8.6 receptions per game in these wins, and that is only an indication of what Buffalo wants to do offensively.

Buffalo is one of the NFL’s most pass-heavy offenses, whether trailing or leading. So, even if Taylor Heinicke struggles against the Bills’ defense, the Allen-Diggs connection is still very unlikely to go quiet.

Washington has been subpar against the pass and solid against the run thus far, which I expect to continue. Washington hasn’t allowed more than 65 rushing yards to an opposing running back in nine straight regular-season games. Meanwhile, the Football Team has funneled targets to top wideouts and is allowing the 7th most completions through two weeks:

Diggs has an incredibly high 31.7% catch share since arriving in Buffalo, which should put him on track for 8-9 receptions in a matchup that isn’t prohibitive to high volume receivers.

Daniel Jones turned in a marvelous performance against the Washington Football Team on Thursday Night Football last week and is aiming to do more of the same in Week 3.

Jones completed 22 passes in each of his first two games of 2021 – losses to Denver and Washington. These defenses are far stingier than Atlanta’s, which is a good sign for a quarterback that thrives against bad defenses. Danny Dimes had an unfortunate schedule in 2020, facing just two teams that were top 16 in completions allowed last season: Tampa Bay and Baltimore. He posted 25 completions vs. Tampa and 24 vs. Baltimore.

The Falcons might be the best possible matchup for opposing quarterbacks that the league has to offer right now. In 2020, the Falcons allowed the 2nd most completions, most passing yards, and 3rd most passing touchdowns. And, the start of 2021 has not been much different.

Atlanta has given up 26.5 completions per game since the start of last season. Atlanta has even allowed 24+ completions in 16 of their last 18 games, as shown below, making this over quite the smash spot for Jones.

The Falcons even allowed a career-high 27 completions to Jalen Hurts just two weeks ago, not to mention they are also allowing the 3rd highest Passer Rating so far this season.

The third-year signal-caller out of Duke is great at taking advantage of bad defenses, and Atlanta’s pass defense is absolutely atrocious.

Stefon Diggs is one of the most talented wide receivers in the NFL, and his numbers are destined to rise along with Josh Allen’s after a poor Week 2 outing. Diggs’ line of 6.5 receptions is far lower than his 8.6 average over his last 10 games, making this a great value spot for the superstar.

In Addition, Daniel Jones and the Giants’ air attack should feast against a historically bad secondary. This could be an absolute blow-up spot for Danny Dimes and the G-Men.

Enjoy playing these props for Week 3, and join us for months of NFL props to come!