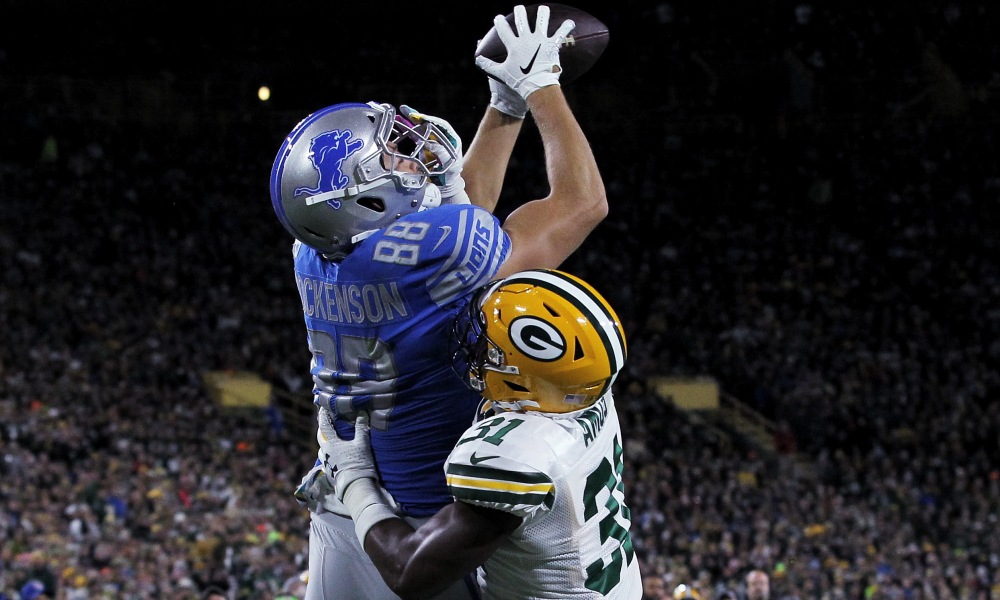 We are rockin’ with Detroit’s stud tight end TJ Hockenson as we break down our best MNF props for Packers Lions.

A breakout season from former Hawkeye was probably inevitable, given his elite 14.8 yards-per-catch average in college combined with his eighth-overall draft pedigree, but the stars are truly aligning for him in the early part of this season.

We’re coming off a 2-0 article card on the main slate and a first-half cash on SNF, so let’s send Week 2 off in style.

Note: We released this at Over 47.5 for our subscribers over the weekend but still like it to this number.

We expect this number to keep rising throughout the day; it’s already at 55.5 at FanDuel, so this 53.5 still represents a solid value despite the fact it’s already moved five yards since opening.

Hockenson was a monster in Week 1, racking up usage both when the game was still in the balance, as well as in garbage time.

While tonight’s game doesn’t have quite the same frenetic shootout potential as last week’s (though tonight’s 48.5 point total is still encouraging enough), thanks largely to the Packers’ strong defense and slow pace of play, the absence of Lions No 1 WR Tyrell Williams could mean an even bigger share of targets for Hockenson.

Not that Goff needs any more motivation to target his TEs — over his last two seasons as an LA Ram, only five other teams targeted their TEs more than they did.

Projections are on board with this play, too, ranging from 54 to 59 yards.

My main concern with this play is the Packers’ penchant for playing slow and sucking the life out of the game. Even when getting badly blown out last week, they refused to pace up and ran just the 28th most plays in the league.

And it is a legit concern, as it’s made the Packers one of the best under teams in the league going back to last season.

However, with a WR corpse consisting of Kalif Raymond (questionable), Amon-Ra St. Brown, Trinity Brown, and Quintez Cephus, the Lions really have no other established downfield threats to throw to.

In a game where the Lions are projected to be badly trailing (+11.5), their passing game will run through their TEs and RBs in catch-up mode.

There is some risk inherent in this play, but Hockenson is all they have, he’s proven capable, and we think he gets there more often than not.