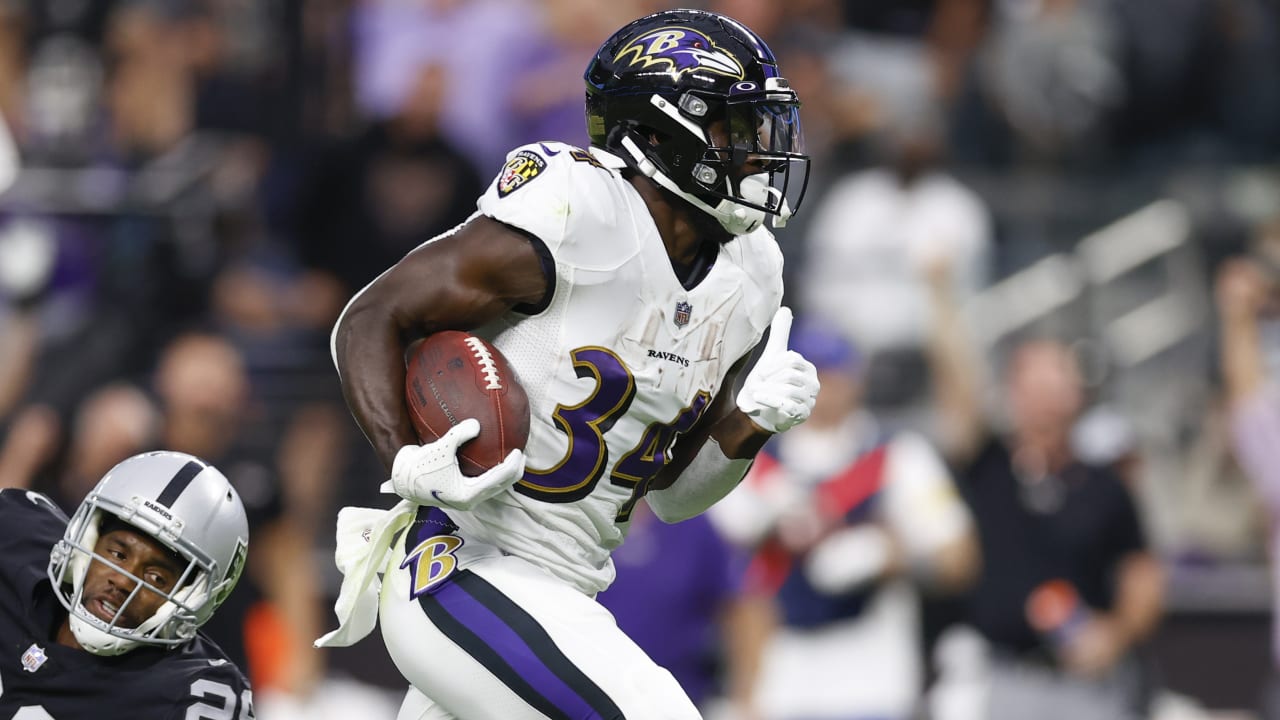 Welcome to the second edition of Sunday Night Football, and this game is a treat. After careful inspection of the matchup, our team has found one SNF prop for Chiefs Ravens.

Patrick Mahomes and the unbeatable September Chiefs travel to Baltimore to take on the uber-entertaining Lamar Jackson. Jackson and the Ravens suffered a tough Week 1 loss to the Raiders, and it was partly due to Jackson’s questionable performance.

However, the Ravens are dealing with a laundry list of injuries, which opens up value on one of their running backs. So, we’re targeting him as our top prop play for Sunday night’s primetime matchup.

Bet the Prop subscriber picks went 17-5 in the opening week — Join us here if you want to get our full weekly slates of NFL props delivered to your device.

There are all sorts of issues in the Baltimore ground game. With injuries to Gus Edwards and JK Dobbins, the Ravens are falling back on their third- and fourth-string running backs.

However, I’d compare this rushing attack to San Francisco’s: put any running back in this scheme and they’re sure to find success. Maybe that has to do with an offensive line that finished top 10 in the NFL in Adjusted Line Yards last season, or maybe it’s the threat of having Jackson on the field.

Either way, that takes us to our favorite SNF player: Ty’Son Williams. Williams got a considerable share of the carries in Week 1, earning 26% of Baltimore’s Rush Attempts. That was third-most on the team behind Jackson (35%) and Latavius Murray (29%), but I’m bullish on his Week 2 prospects.

Let’s dig into why.

Considering the state of the Ravens backfield, Williams should see his role in the offense increase in Week 2.

Jackson scrambled a lot against the Raiders, which he’s known to do. But the Ravens weren’t having a lot of success in the passing game and Jackson ended up fumbling three times.

Lamar Jackson with the same fumble that happens every time you try to dive with a QB in Madden. pic.twitter.com/l8gLgMSywY

Latavius Murray, Williams’ backfield partner, got 10 carries Monday but only managed 28 yards. He scored a touchdown, but his longest rush was just eight yards. I’d expect John Harbaugh to look towards Williams more this week after Monday’s strong performance.

He was clearly their best RB, taking his nine carries for 65 yards. While Williams had one carry for over 30 yards, 7.2 yards per attempt is still impressive, especially when you consider how much the Raiders defense improved over the offseason.

Plus, Williams moves quite well at 6-foot and 220 pounds:

How to Beat Kansas City

The formula to beating the Chiefs is running the damn ball. You have to control the time of possession, keep the ball out of Patrick Mahomes’ hands as much as possible, and play with a lead. The September Chiefs are beatable if you can produce long, sustained touchdown drives.

For example, the Browns almost did it last week. They ran the ball down the Chief’s throat in the first half, and Cleveland ended up with 153 rushing yards at 5.9 YPC on the game. Baker Mayfield was accurate when he did throw, but he tossed a late-game interception once the Chiefs regained the lead.

Baker Mayfield, trying to throw the ball away (I think), instead loses it by throwing an interception.

Therefore, it’s imperative that the Ravens run the ball and run it effectively. The best course of action for Harbaugh is to feed Williams, and that’s going to help cash this prop.

The good news is that Kansas City currently ranks dead last in Rush Defense DVOA following Week 1, and this unit finished 31st in that stat in 2020. Baltimore ran for 158 yards at a whopping 7.5 YPC the last time Baltimore and Kansas City played, which is great news for Williams backers.

Our friends at Run the Sims give him a median result of 52 yards. 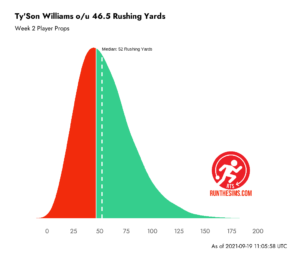 Considering the consensus number for Williams is just 46.5, this is a top-notch EV play. Surprisingly, the line has been holding pretty steady, but I’d grab this number ASAP in case it starts to get bet up.

But if that happens, our team is high on Williams nonetheless. We’re willing to play this prop up to 49.5 yards.

Make sure to bet our SNF Prop for Chiefs Ravens, and after it cashes, consider joining us as a subscriber for the remainder of the season.