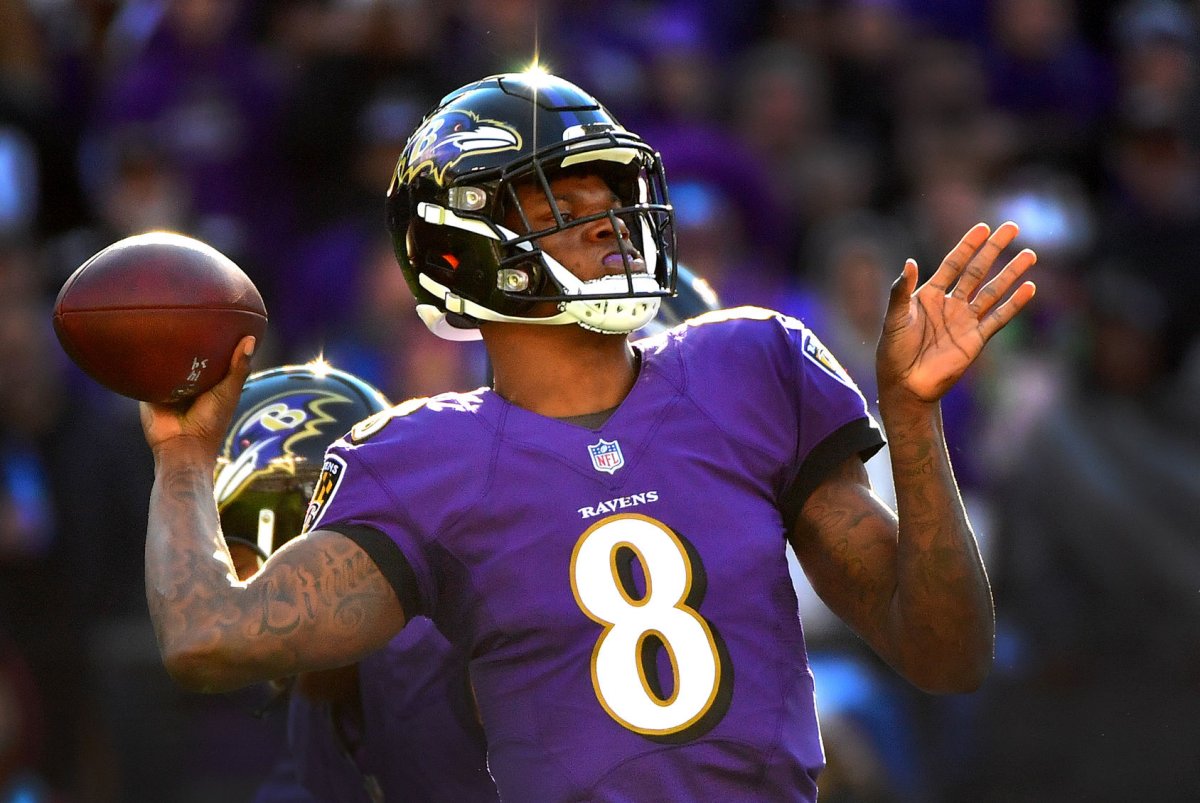 We’re dealing Lamar Jackson props for TNF, buying the Baby Goat in primetime as the Ravens visit the Dolphins as 7.5-point road favorites.

We told you back in Week 1 to expect more passing from Lamar this year, but a 40% increase in passing volume is insane and well beyond even the wildest predictions.

The books are adjusting, but not quick enough. That’s one reason why we like Lamar tonight and are making this an official BTP play for 1 unit.

We’re coming off a win on MNF and our subscriber plays are up +17.6 units on the year — Join us here to get full slates of NFL & NBA props, and more, all alerted to your device.

Jackson has been smashing expectations all year, going over his closing PaYds prop line 88% of the time and doing so by an average of 50 yards. 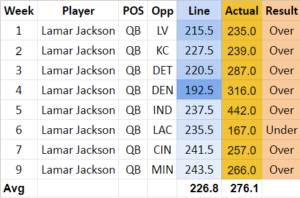 His median result of 261yards is a full 13% higher than his line for this week, and as we’ll get to in a minute, the Miami matchup is about as good as it gets. With prop markets getting tougher and tougher, we just aren’t seeing as much of those kinds of gaps to a median result this year, making this a pretty easy spot to fire at, and sleep easy with the result either way.

Especially in a primetime spot, I expect this line to steam towards or past 240 yards by kickoff.

Projections offer strong consensus. The industry as a whole all place Jackson well over this number, with a low projection of 255 and a high of 286. 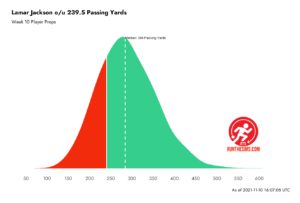 286 yards may sound like a lot for a guy who’s not known for his passing, but that would still be lower than 297 yards, which is what the average QBs is putting up per game against Miami this year, dead last in the league.

They’ve actually been relatively efficient with a 7.5 YPA against that ranks 14th, but opposing passers are getting volume for days. The Dolphins have allowed 43 passing plays per 60 minutes this year, tied for third-most in the league. One of the reasons is that the Dolphins offense itself plays fast and is passing a ton — their 67% pass rate leads the league, and their 24.8 seconds per snap is the fifth-quickest.

Their games tend to be pass-heavy affairs, and it’s added up to 78% of the QBs facing them going over their passing line this year.

We love the potential for pace and efficiency from the undervalued Jackson on TNF.