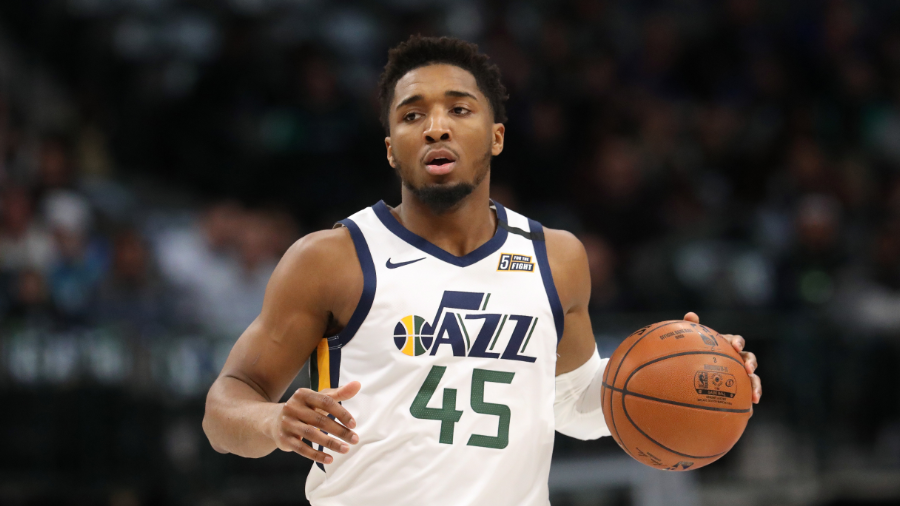 Every NBA team has around 10 games under their belts and the NBA Props market is solidifying, and tonight we have two players worth looking into. It’s time to take a dive into Donovan Mitchell props, as the Utah Jazz host the Atlanta Hawks. Tip-off is at 9:00 PM ET.

And on top of that, we’re going to be fading Eric Bledsoe tonight, as the Clippers host the Trail Blazers at 10:00 PM ET.

I started with a nice win on my first NBA Article play with Bet The Prop this season, and I’m looking to stay perfect tonight.

We profited over 44 Units on NBA props last season and are already up 10.8 Units this season — join us here for full nightly NBA prop slates (plus NFL and more!) alerted to your device.

Let’s dive into some analysis on Mitchell’s and Bledsoe’s lines.

Donovan Mitchell is one of the most skilled guards in basketball. He punishes defenses with his shooting, slashing, and his playmaking, which has been on full display lately.

Mitchell may be in a slight shooting slump right now, but he’s handing out dimes to his teammates at a career-best level. After posting 5.2 assists per game last season, Mitchell is maintaining his high average with 5.3 assists per game through nine games.

Utah clearly wants the ball in Mitchell’s hands as much as possible, evidenced by his NBA-leading 36.0% Usage Rate. As shown below, his shot attempts and assist numbers have ramped up recently.

The Louisville product has at least 6 assists in six of his last seven games. He is finding his groove as one of the league’s best on-ball guards and should find success against a struggling Hawks defense.

The Jazz find themselves hosting the Atlanta Hawks tonight, which is a clear positive for Mitchell’s playmaking prospects. Atlanta has been bleeding assists to guards this season, especially in their most recent games. The Hawks have given up 10+ Assists to an opposing guard in five consecutive contests, as shown here:

The Hawks are giving up 26.1 assists per game this season, the fourth-most in the NBA. Even worse, this number has shot up to 29.6 per game over their horrendous last five games.

Atlanta ranks 27th in defensive rating and is searching for answers that they probably won’t find in Salt Lake City tonight.

The 6’1″ Mitchell didn’t suit up last game between the Hawks and Jazz. But, Mike Conley‘s 11 Assists and Royce O’Neale‘s 6 Assists are positive signs that the ball-dominant guard has the potential to rack up assists on Tuesday night.

The Los Angeles Clippers have had a rocky offensive start to the season, due in part to Kawhi Leonard‘s absence. The Clippers rank 21st in Offensive Rating and are trying to center their offensive identity around three-point shooting, taking the eighth-most threes per game thus far.

Eric Bledsoe does not fill any offensive void and does not aid the team’s outside shooting. He’s playing the worst offense of his career and has struggled to put the ball in the basket.

The 12th-year NBA veteran is shooting 32.9% from the field and 13.8% from downtown, both marking career lows. He’s only scoring 8.6 PPG and has seemingly gotten worse as the Clips have played more basketball. Bledsoe hasn’t even cracked the 10-point mark since the second game of the season, as shown below.

The aging guard has seen his playing time decrease over his last few games as well. After playing 27.9 minutes per game in his first four contests, Bledsoe is playing just 25.2 MPG in his last five.

After scoring just 7 points in his last matchup with the Trail Blazers, a similar performance could very well be in store again tonight.

Donovan Mitchell is one of the NBA’s most exciting young stars, and his playmaking skills should be on display tonight in a soft matchup against the Atlanta Hawks.

Meanwhile, Eric Bledsoe’s lack of scoring prowess could be a theme in tonight’s nationally televised game against the Portland Trail Blazers.

Have fun taking the over on Donovan Mitchell props and fading Eric Bledsoe. Come join us for the rest of the NBA season!