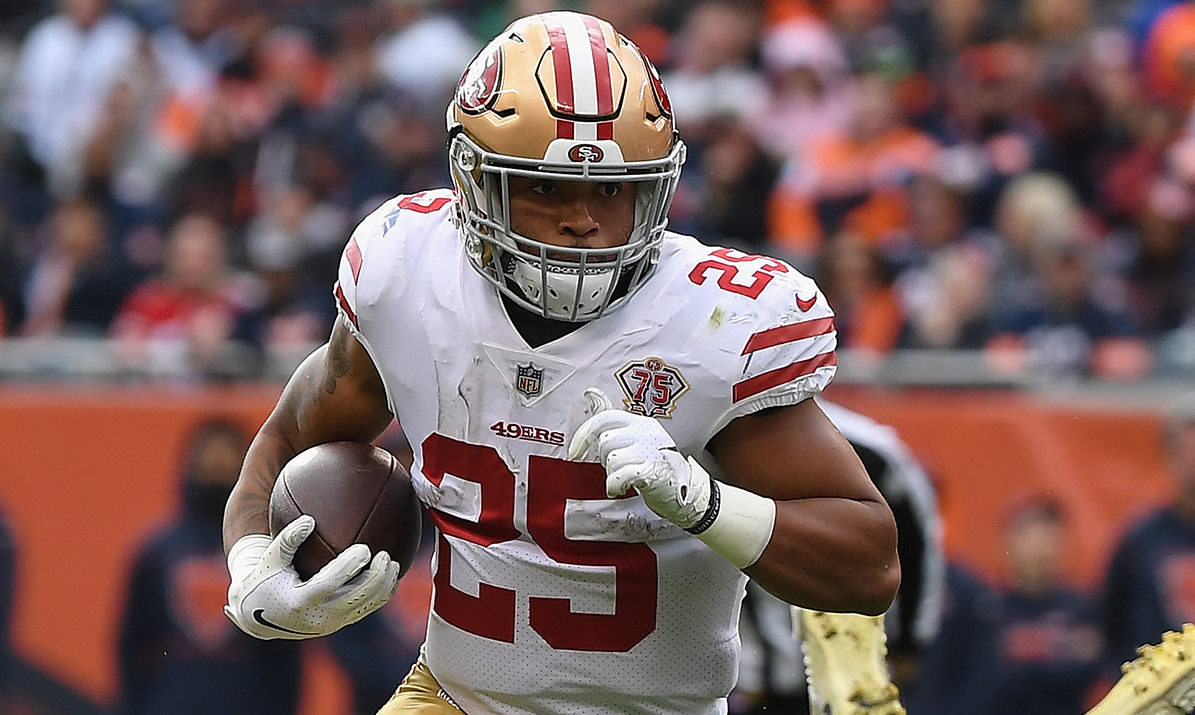 After an exciting start to the 2022 NFL postseason, we’re bringing you two NFL Divisional Weekend Props for Packers 49ers.

One game has caught our eye most of the four, and it’s a Saturday primetime spot. The Green Bay Packers are hosting the San Francisco 49ers in a battle for a spot in the NFC Championship game — Kickoff is at 8:15 PM ET on FOX.

Bet the Prop is hitting 60% on its official NFL plays this year. Join us here to get full weekly slates of NFL props delivered to your device, including BTP’s NBA props, which are hitting 62%.

For the Divisional Weekend slate, we’re taking a look at Elijah Mitchell and Aaron Jones. The Niners have an elite ground game on both sides of the ball. Their top-level rushing offense and rushing defense create some nice angles for us.  Let’s dive into the plays!

Elijah Mitchell has emerged as a legitimate starting-caliber running back in his first NFL season. He was even in conversations with Najee Harris and Javonte Williams as a top-three rookie runner. Mitchell has been at the center of the Niners’ prolific rushing attack this season. And, there are not many teams that utilize their run game more than San Francisco.

The 49ers fully committed to their ground game around the midpoint of the 2021 season. Since then, everything has clicked, and the team has become a contender. They’re 8-2 in their last 10 games, and to win Sunday, they’re going to have to dominate the Packers on the ground.

San Francisco has averaged 33.2 rush attempts per game since Week 10, good for second-most in the league during this stretch. This insane rushing volume trailed only the Eagles, who are now eliminated.

The Niners are 8-0 when they run the ball at least 30 times this season. Expect them to play smashmouth football at freezing cold Lambeau Field on Saturday night. The weather forecast calls for a frigid 11º F temperature at kickoff, with some wind too. Jimmy Garoppolo is playing hurt and will likely be hidden behind the run game in the team’s game plan this week.

Mitchell has become one of San Francisco’s most important players on the roster. During the team’s last three games, the rookie stud has accounted for 69 of the team’s 70 RB rush attempts. The only guy stealing any work from him out of the backfield is Deebo Samuel, who seems to be redefining positions on a football field.

Mitchell has at least 21 rush attempts in all six of his appearances since Week 10. He’s averaging a gigantic 24.2 attempts per game during this stretch and figures to remain equally involved with an NFC Championship bid on the line. Look for the rookie to see at least 20 carries on Saturday night as long as the game doesn’t get ugly.

Aaron Jones is an uber-talented running back and is important to what the Packers do offensively. However, he’s clearly become less involved as AJ Dillon‘s workload has increased. And, a matchup against one of the league’s stingiest fronts doesn’t make things any easier for Jones.

The UTEP product posted an impressive 5.2 yards per attempt during that stretch, but he likely won’t be able to produce with that level of efficiency this weekend. Jones remained under this line in three of his last six games, averaging 47.2 YPG since Week 10. Meanwhile, Dillon averaged 14.3 carries and 55.3 yards per game during this same stretch.

In terms of volume, Jones could easily be playing second fiddle to Dillon on the ground against the Niners.

The Niners pose an unbelievably difficult matchup for the Green Bay rushing attack. I successfully faded Ezekiel Elliott against them last week and I’m looking to repeat with Jones this week.

San Francisco has allowed just two 50-plus yard rushers in their last ten games. One of the two was Joe Mixon, who needed 18 carries just to finish with 58 yards against the team’s elite rush defense. And, Jones likely won’t be seeing anything close to that type of volume.

They followed this dominant stretch by giving up just 45 yards on 16 combined carries between Dallas’ backs last Sunday.

The now 11-7 49ers have allowed more than 90 rushing yards just once in their last ten games. The Packers would likely need to surpass this total in order for Jones to finish with enough yardage to reach his over.

I’m going to keep riding the 49ers’ defensive front and fade Aaron Jones in the Divisional round.

Elijah Mitchell has become a central focus of San Francisco’s offense and should continue to see as many carries as he can handle on the road in Green Bay.

Aaron Jones, however, will not see all the touches he can handle. Jones is in a split with AJ Dillon and facing a top-tier 49ers front, and may have a hard time putting together a productive night.

Enjoy playing these NFL Divisional Weekend props, and join us for the rest of the postseason!