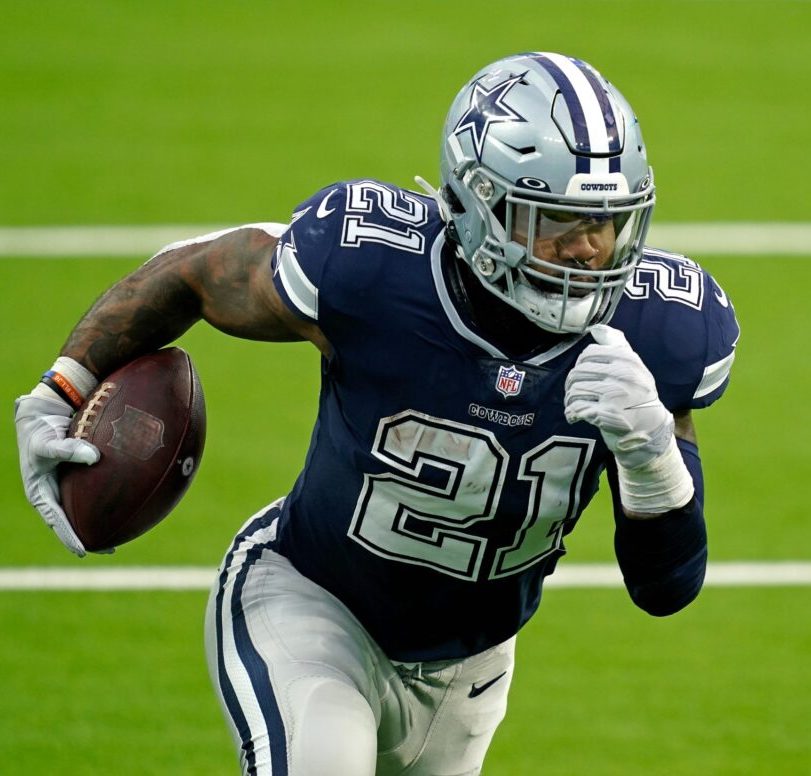 After an 18-Week marathon of a regular season, it’s finally time for some playoff football and we’re bringing you two free NFL Props for Wild Card Weekend.

The 14-team field is set and there are plenty of enticing spots on the Round 1 slate.

The NFC East will be represented by the 12-5 Dallas Cowboys and the 9-8 Philadelphia Eagles in the 2022 edition of the NFL playoffs. The Cowboys will be hosting the San Francisco 49ers at 4:30 PM ET on Sunday afternoon, just after the Eagles travel south to square off against the Buccaneers at 1:00 PM ET.

Bet the Prop is hitting 61% on its official NFL plays this year. Join us here to get full weekly slates of NFL props delivered to your device, including BTP’s NBA props, which are hitting 62%.

For the Wild Card Weekend slate, we’re taking a look at Ezekiel Elliott and Jalen Hurts. These guys are big reasons why Dallas and Philly have been competitive, but will they make a big impact on Sunday? Let’s dive into the plays!

Ezekiel Elliott had a terrific four-year stretch as one of the NFL’s elite running backs. Those days are over. He’s a multi-faceted NFL talent thanks to his pass-blocking ability and contributions to the receiving game. But, that’s not going to help him surpass the 50-yard mark on the ground.

Zeke is as durable as they come at the running back position. He’s only missed one game due to injury in his entire six-year career. That feat shouldn’t be understated. However, he’s not immune to picking up smaller ailments along the way.

Despite playing all 17 games this season, Elliott has appeared on the injury report throughout the season. He cropped up with a knee injury three different times. This appears to be a lingering issue for the 6th-year running back. The Cowboys have adjusted their plans regarding their aging RB, as he hasn’t played more than 70% of the team’s snaps in each of their last ten games.

Elliott even provided an update himself this week. After the RB said two weeks ago that he thought he’d be “close to 100 percent” for the postseason, he said this week that he’d continue to wear his knee brace for extra stability

Ezekiel Elliott: “I feel really good. Knee feels solid. Not getting any stiffness in it any more.” Said he doesn’t need the knee brace any more but he’ll continue to wear it for extra stability

That leaves some room for concern, given his struggles since initially picking up the knee injury.

Struggles Down the Stretch

The former first-round pick had a strong first six games, averaging 17 carries and 86.8 rushing yards per game. He was hyper-efficient, too, posting 5.1 yards per attempt during that stretch. He hit this over in five of his first six and looked great.

In the ten games that followed, his efficiency and workload saw a massive decrease. 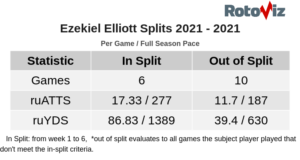 The San Francisco 49ers have been difficult to run on this season, getting stronger as the season has progressed.

The Niners allowed just 76.6 rushing yards per game to RBs. Only five teams allowed fewer rushing yards to RBs this season. Since Week 10, their run stoppers have really rounded into shape, playing at the level of their squad that made a Super Bowl appearance just two years ago.

Here are their opponents’ leaders in carries and how they’ve fared since Week 10:

Elliott can reasonably be expected to handle 12-14 carries this week, as a higher-end projection of his workload. And, unless he has his most productive outing in over two months, he probably won’t be cashing any overs.

Jalen Hurts hasn’t been terrible this season, but he’s largely been kept afloat by his rushing production in tandem with his passing. There aren’t any viewers out there that would call Hurts a pocket passer, by any means.

Head Coach Nick Sirianni realized this a month into the season and adjusted their playbook accordingly. Hurts averaged just 179.7 passing yards per game after his first four games. He finished under the 200-yard threshold in 8 of 11 games since then. 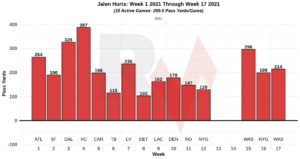 The Buccaneers are known as a pass-funnel defense, but that strategy doesn’t really exist against Philadelphia. Hurts had just 115 passing yards in his last matchup against Tampa Bay, and he was showered with boos from a home crowd in the second half of that truly awful performance.

At 52%, Philly has the league’s highest run rate by a wide margin. They’ve decided it doesn’t matter who their opponent is and they’re going to run the ball as much as they can every week. The Eagles faced off against three of the league’s top five run defenses (by expected points), and Hurts remained under 200 passing yards in all three. He even threw under 25 passes in two of the three games.

I’d expect the Eagles to put their strength up against Tampa’s, as the Birds likely sense that their most likely path to a win is by winning this game in the trenches and keeping Tom Brady off the field with long drives.

The forecast currently calls for monsoon-like conditions at Raymond James Stadium. Hurts will to have to deal with sustained wins of over 20 miles per hour with heavy rain early on.

Hurts is a young quarterback who’s had his share of struggle  and is making the first playoff appearance of his career. The last thing that would help his aerial success needs is a sloppy, windy game on the road.

Todd Bowles is one of the best defensive coordinators in football, and I’d expect a strong game plan in place to contain Hurts this weekend.

Ezekiel Elliott hasn’t looked right since the first six weeks of the season and has to go up against one of the league’s top rushing defenses this week. It’s unlikely he’ll see enough volume to reach the love on his rushing yards.

Meanwhile, Jalen Hurts has struggled as a passer this season. And, he’s thrown less and less as the season has gone on. Look for Philly to keep the ball on the ground in some rough conditions on Sunday.

Enjoy playing these NFL props for Wild Card Weekend, and join us for the postseason!