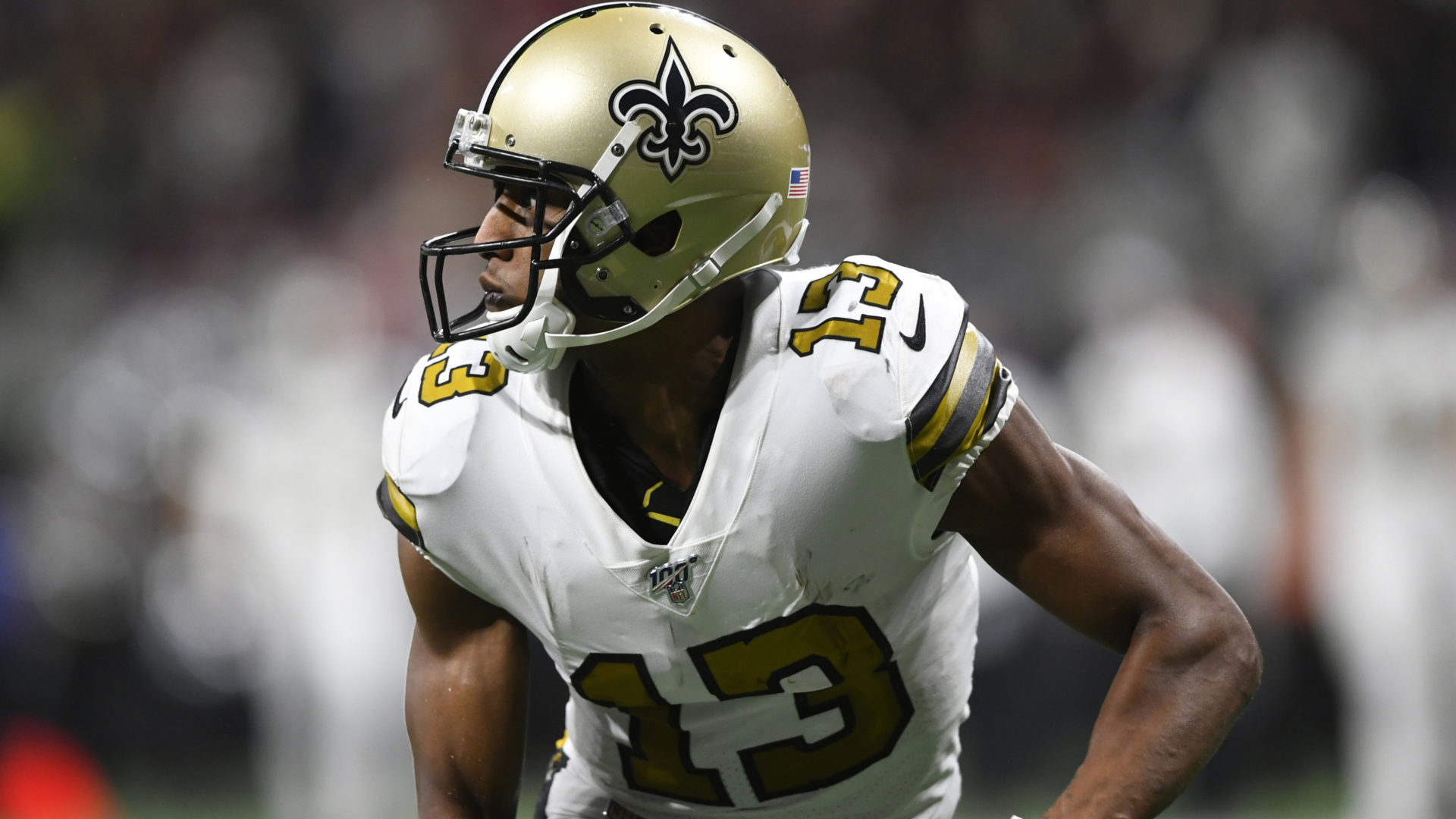 Welcome to this free edition of the best Saints Colts props for Monday Night Football.

It’s a tough game to handicap for props, so we’re bringing in reinforcements. In the second section of this piece, Jeremy Cohen (@JCProps) joins us to break down a juicy-looking fantasy prop on Michael Thomas that’s available for anyone with access to the DraftKings sportsbook.

Fantasy props provide a huge edge for the informed bettor, and we’ve been handing out winners in our premium Slack chat all season — join us here to get access to all those fantasy props, as well as our full selection of offshore props, all alerted to your device.

Offshore is where we begin this piece and a Marlon Mack rushing prop that looks a little off to us.

Mack had 13 rush attempts in his return from a hand injury against the league-best Tampa Bay run defense last week. This week’s matchup against the Saints as almost as tough, but there’s good news:

New Orleans has allowed fewer RB rush attempts than any team in the league as the opposition has gone out of its way to avoid elite run-stuffing tackle Sheldon Rankins. He’s out for this one, as is DE Marcus Davenport, who also grades out well in run defense.

With TY Hilton again unlikely to suit up, the Colts are down to Zach Pascal and Marcus Johnson at WR. They’re not going to win a shootout under the dome in New Orleans, so their best bet is to keep Drew Brees and company off the field with a heavy dose of Mack against a depleted defensive line.

Don’t be too scared off by Mack’s lack of involvement last week, where he played just 41% of snaps. The matchup was a nightmare, and the team was likely bringing him along slowly coming off the multi-week absence.

Even accounting for a few games where he’s missed time with injury, Mack is still averaging 18.6 attempts per game with a median result of 19. 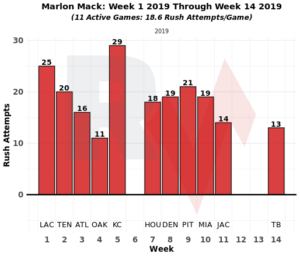 You may be scared off by the game script, but rest assured Frank Reich is not. He’ll keep running that ball all night if he’s in the mood, scoreboard be damned — Mack is averaging 17.8 carries in losses this year.

In fact, Reich appears to want to run even more when his team is an underdog. It’s a small sample, but over the last two years, Mack is averaging 21.3 rush attempts when his Colts go in as underdogs of six points or more.

He averages 16.8 attempts the rest of the time. 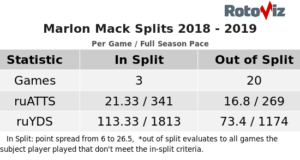 That makes Mack less gamescript dependant than most RBs. Combined with a line that appears overly weighed down by last week’s weird game, and you have our favorite play of the night.

Hi guys, Jeremy Cohen here, back with more +EV fantasy props, which went 3-1 in our subscriber Slack channel this week.
Thomas has some ridiculous home/away splits that have been consistent throughout his career. This year is no different. 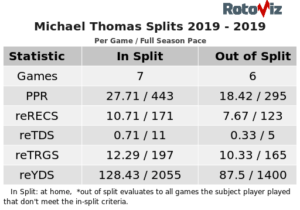 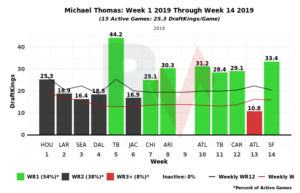 On the season, Indianapolis is allowing 169.54 receiving yards and the 11th-most DK fantasy points (38.6/game) to opposing WRs.
However, over the past four weeks, the Colts have allowed 222.5 yards per game and the most fantasy points per game to WRs (50.75).

They run a zone-heavy scheme that has allowed receivers to catch 68.4% of passes, while Thomas runs a lot of short and intermediate routes designed to eat up the zone. It also helps that Thomas has caught a 121 of 147 (82.3%) of the passes thrown his way this season.
I’m expecting another big performance tonight from Michael Thomas in the Superdome.
previous post