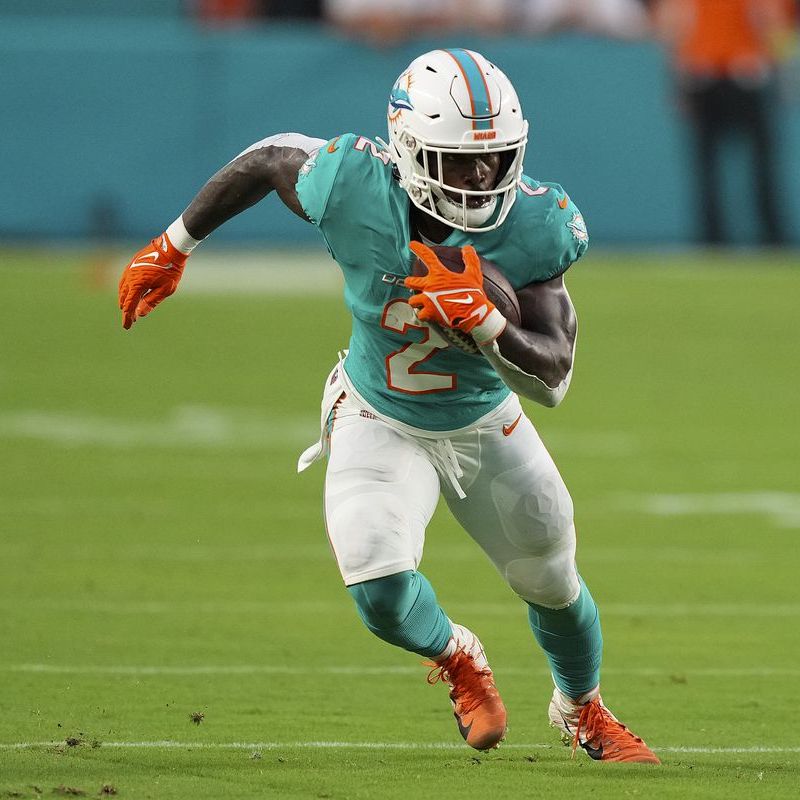 The Miami Dolphins and the Philadelphia Eagles are the only undefeated teams in football after three weeks of action. Tonight, that gets put to the test. Miami is heading to Cincinnati to take on the Bengals — kickoff is at 8:15 ET on Amazon Prime. With Miami coming in as underdogs, we’ll be looking at Chase Edmonds to lead the way with our Thursday Night Football props for Week 4.

The Dolphins are 3.5-point underdogs tonight, which makes sense despite their 3-0 start. They’re on a short week after Sunday’s grueling, intense battle against the almighty Buffalo Bills. Despite their win, they held the league’s worst time of possession in Week 3. It will be an uphill battle for the Fins tonight, which is why we like Edmonds to take a backseat to Tua Tagovailoa and the passing attack this evening.

It seemed like Chase Edmonds had an unobstructed path to see plenty of volume with the Miami Dolphins this season. However, Raheem Mostert‘s increased involvement in Miami’s pass-happy offense has pumped the breaks on Edmonds’ 2022 outlook.

Mostert has out-carried Edmonds in Miami’s last two games, and this should continue as long as the former 49er can remain healthy. And, the Dolphins have had one of the NFL’s most pass-happy offenses so far. Both of these factors work against Edmonds’ prospects of handling real volume tonight.

Chase Edmonds has been out-carried by Raheem Mostert 24-23 so far this season. The former Cardinals RB has also seen less work as the season has progressed. He’s handled just 11 rush attempts over the team’s last two contests, while Mostert has carried 19 times during this stretch. This obviously does not bode well for Edmonds moving forward.

Additionally, here are the snap shares for the two backs over Miami’s last pair of games:

Unfortunately for Edmonds, head coach Mike McDaniel seems to trust Raheem Mostert a bit more. They spent several years together in San Francisco, and while Edmonds was a more expensive off-season acquisition, he has less familiarity with McDaniel.

The split backfield should continue, and if Mostert keeps the edge over his teammate, there won’t be nine carries in tonight’s game script for him.

When the Dolphins kept their foot on the gas in their Week 1 win over the New England Patriots, that was not a fluke. Tua Tagovailoa ranks third in the NFL in Pass Rate Over Expected thus far, trailing only Josh Allen and Patrick Mahomes. To put it simply, only Buffalo and Kansas City look to pass more than Miami in neutral situations. And, with the Dolphins entering tonight’s action as underdogs, they may throw even more.

Miami legitimately has no reason to lean on their run game. The Dolphins have been ultra-efficient in 2022, ranking third in yards per play, which trails only the Ravens and Eagles. But, they’ve been fantastic through the air, not on the ground.

The Fins are averaging 9.0 yards per pass attempt, good for 2nd in the NFL. On the other hand, their 3.3 yards per rush attempt ranks 31st in the NFL.

Meanwhile, Cincinnati has done a tremendous job of controlling the time-of-possession battle and forcing opponents to throw. Their opponents are passing 40.3 times per game (5th most) and running 23.0 times per game (2nd most). And, they’ve faced Mitch Trubisky, Cooper Rush, and Joe Flacco. None of these quarterbacks and their offenses look to throw even close to as much as Tua and the Fins.

Mike McDaniel seems like a legitimate football genius, so expect him to realize Miami’s best off leaning on their aerial attack tonight.

Edmonds has gone under this line in 2 of his 3 games with the Dolphins, and he’s played fewer snaps than Raheem Mostert lately.

With Edmonds taking a backseat to both Mostert and Miami’s passing attack, the under looks like a fantastic spot on TNF.

Enjoy playing our best Sunday Night Football Props for Week 3 and Join us for the rest of the NFL season!