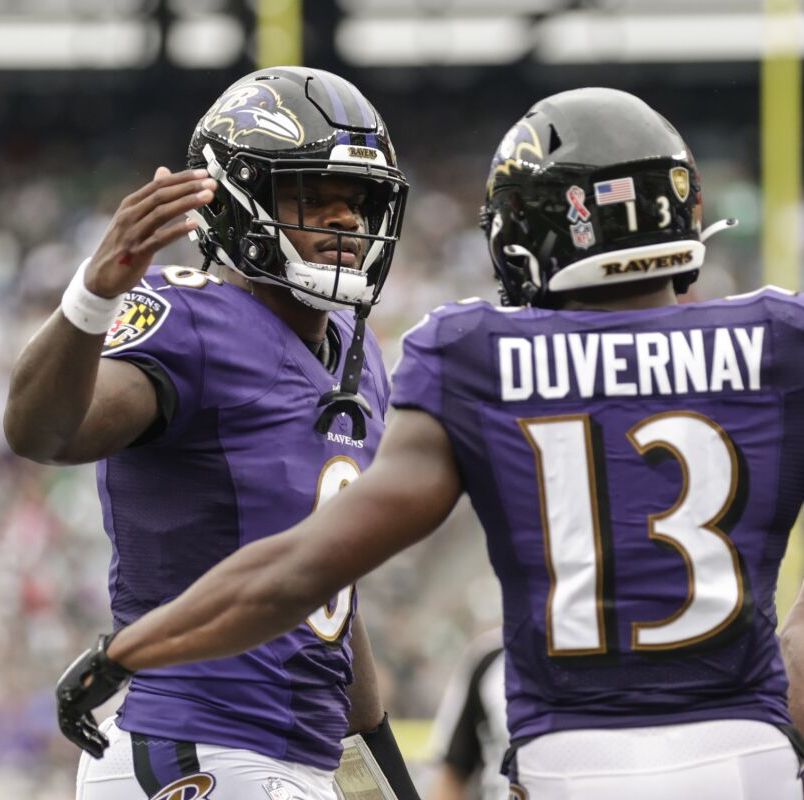 The Baltimore Ravens are seeking revenge against the Cincinnati Bengals this evening. Cincinnati dropped 41 points on Baltimore on two separate occasions last season, and the Ravens have been waiting for tonight’s contest since last December. This AFC North battle kicks off at 8:20 PM ET on NBC, and we’re bringing you two Sunday Night Football props this week.

Lamar Jackson has done an incredible job carrying Baltimore’s offense this season. And, with wide receiver Rashod Bateman inactive tonight, Devin Duvernay should see more opportunities against the Bengals. We’ll be locking in on these two guys as we target Baltimore’s passing game in a primetime bout.

Lamar Jackson has thrown the ball as well as he ever has through the first month of the 2022 NFL season. Entering Week 5, Lamar has thrown 11 touchdowns, tied with Patrick Mahomes and Jared Goff for the league lead.

Baltimore has one of the most dangerous offenses in football, and it’s all because of their MVP quarterback. The team’s 29.8 points per game rank third in the NFL, and it remains to be seen whether or not they can keep it up for a whole season. The Bengals’ defense is yet to face a test as tough as Baltimore’s offense this season, and it’ll be a nearly impossible task to shut down Lamar Jackson.

The Bengals are yet to allow multiple passing touchdowns in a game this season. However, this is bound to change. Cincy gave up 19 passing touchdowns across their final 10 contests of the 2021 regular season. That was tied for the 3rd most Pass TDs allowed during that stretch. And, they conceded multiple scores through the air in 7 of those 10 games.

On top of this poor stretch to close the 2021 campaign, the Bengals haven’t fared well against Jackson in particular. Lamar has thrown at least 2 touchdowns in two of his last three matchups with Cincinnati.

The Bengals’ secondary has been stout thus far. But, we could see some regression for the defensive unit tonight against Lamar Jackson and an explosive Ravens offense.

Devin Duvernay has shown fantastic chemistry with Lamar to begin the season. He’s posted at least 40 receiving yards in three of his four games, averaging 43.0 YPG.

Most importantly, Rashod Bateman will be inactive this evening due to a foot injury. That means Duvernay should find himself as Lamar’s second favorite target on SNF, trailing only Mark Andrews.

Duvernay has been more of a role player for the Ravens over the last couple of years. But, the third-year wideout won’t have much competition for targets tonight.

With Bateman out of the picture, Duvernay is likely to play as large a role as he ever has. The All-Pro returner played a season-high 64% of the snaps last Sunday, where he racked up 51 yards on 4 receptions.

Duvernay only played 80% of Baltimore’s offensive snaps once last season. As the Ravens’ only active wideout that has caught more than five career passes from Lamar Jackson, the 5’11” receiver should be plenty involved tonight.

Lamar Jackson is familiar with Devin Duvernay, and that could go a long way for his target share against the Bengals. He’s posted 37.2 receiving yards per game across seven career games where he’s seen at least 4 targets. Expect him to see around five targets this evening, which should be enough to get him over the 35-yard mark against the Bengals.

Over five targets per game are vacated from Baltimore’s lineup tonight thanks to Rashod Bateman’s absence. Look for Devin Duvernay to soak up these targets as Lamar Jackson and the Ravens play their third home game of the 2022 season against the Bengals this evening.

Enjoy playing our best Sunday Night Football Props for Week 5 and Join us for the entire NFL season!