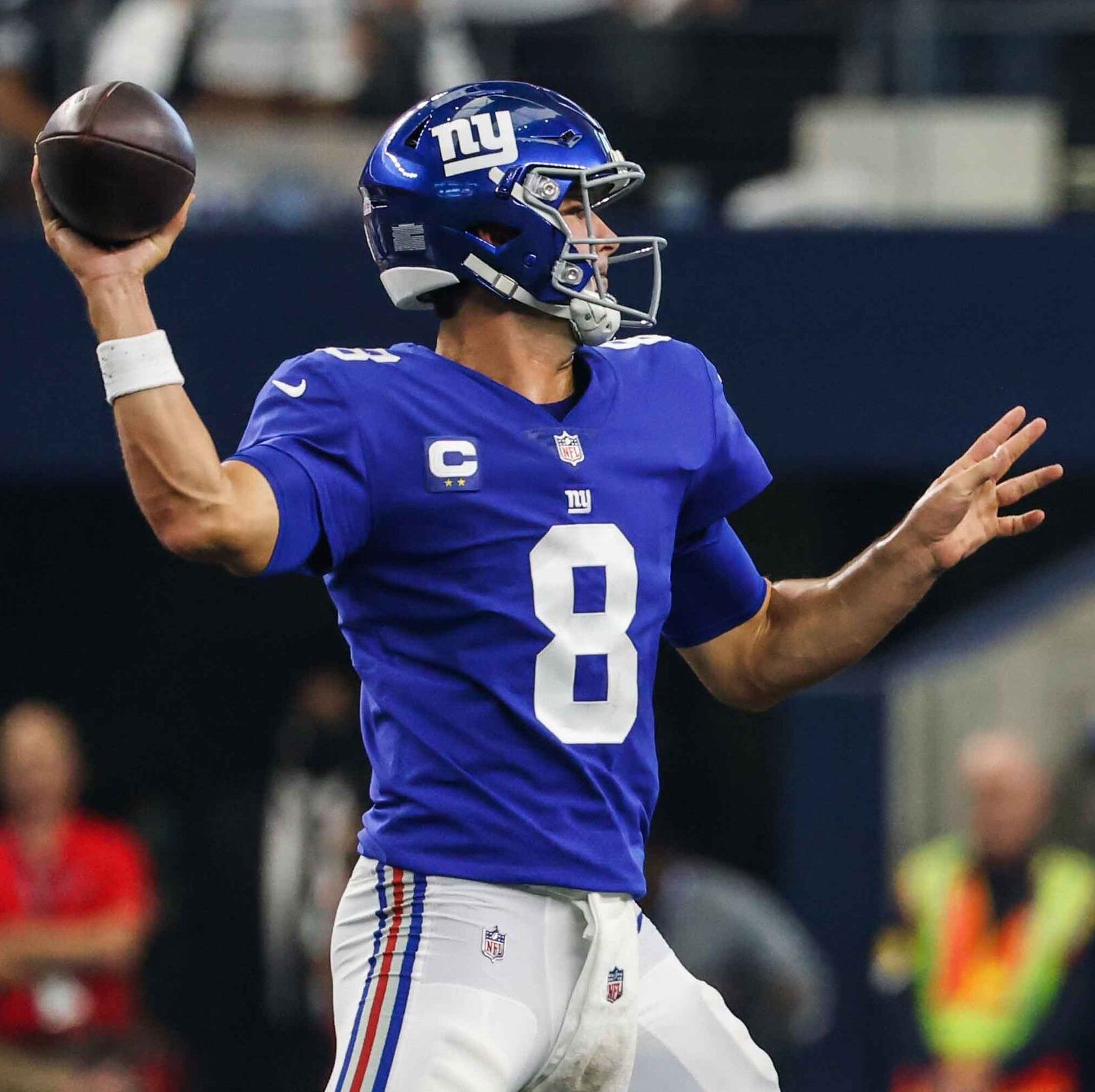 London, England will be hosting the NFL for the second time in 2022 tomorrow. And, we actually might get a good London game for once! The New York Giants are facing the Green Bay Packers — kickoff is at 9:30 AM ET. And, we’ll be looking at Giants QB Daniel Jones as one of our top NFL Props for Week 5.

Jones is not fully healthy and is facing a Packers defense that performs well against the pass. New York has one of the league’s most potent rushing offenses and should lean on Saquon Barkley tomorrow. Everything in this game sets us up perfectly for a Daniel Jones fade in London.

Daniel Jones has not played quarterback at a high level for the New York Giants in 2022. But, he’s been just good enough to help the team reach a 3-1 record for the first time since 2011. The fourth-year QB has been a game manager, operating a low-volume passing offense that doesn’t take many deep shots.

You might ask: why don’t the Giants look to throw downfield? Well, they have arguably the worst wide receiver room in all of football right now. After a mountain of injuries has piled up among the team’s pass catchers, the path to explosive passing plays is a difficult one for Danny Dimes.

Sterling Shepard has been placed on Injured Reserve with a knee injury. Kadarius Toney is never on the field. Kenny Golladay isn’t traveling with the team this week. And, rookie Wan’Dale Robinson will be inactive again this week.

That leaves Richie James, David Sills, and Darius Slayton to man the wide receiver position for the G-Men in Week 5. I’m sorry, but that is absolutely embarrassing.

The team’s entire wideout group combined for 3 receptions and 25 yards last week. None of these three guys recorded a long reception of over 11 yards against Chicago last Sunday.

Additionally, Daniel Jones ranks 31st in Average Depth of Target in 2022. His 6.3 ADOT is a career-low mark by a solid margin. And, it’s not hard to decipher why he’s not throwing downfield.

These three healthy wideouts have combined for just one reception of at least 20 yards this season. Sills made a 24-yard grab back in Week 2, which happened to be one of just eight career receptions for the 26-year-old. None of these guys have much big play ability. And, with Jones hobbled, it will be tough to get anything going downfield against a strong Packers secondary.

The Green Bay Packers do a tremendous job of limiting explosive pass plays. The only player to record a reception of more than 30 yards against Green Bay this season is Justin Jefferson. And, we can all agree that the Giants don’t have anyone remotely close to JJ on their roster, especially now.

Green Bay is a perfect matchup for the under on this prop. They’ve held opposing quarterbacks under this mark in 3 of 4 games thus far. And, Jones has hit this under in 3 of 4 games himself. But, most importantly, the Packers are much easier to run on than to throw on. Here’s where their defense ranks in 2022:

This game profiles as a Saquon-heavy game script for New York. With a depleted pass-catching group, it would not be wise to attack Green Bay’s cornerbacks, Jaire Alexander and Eric Stokes, tomorrow morning.

Daniel Jones enters this week’s contest with a 75% hit rate on this under, while the Packers’ defense has given up a completion of over 30 yards in just one game. It will be extraordinarily difficult for Danny Dimes to get anything going downfield with a low-volume pass attack on tap tomorrow.

Have fun playing our best NFL Props for Week 5 and Join us for the rest of the NFL season!