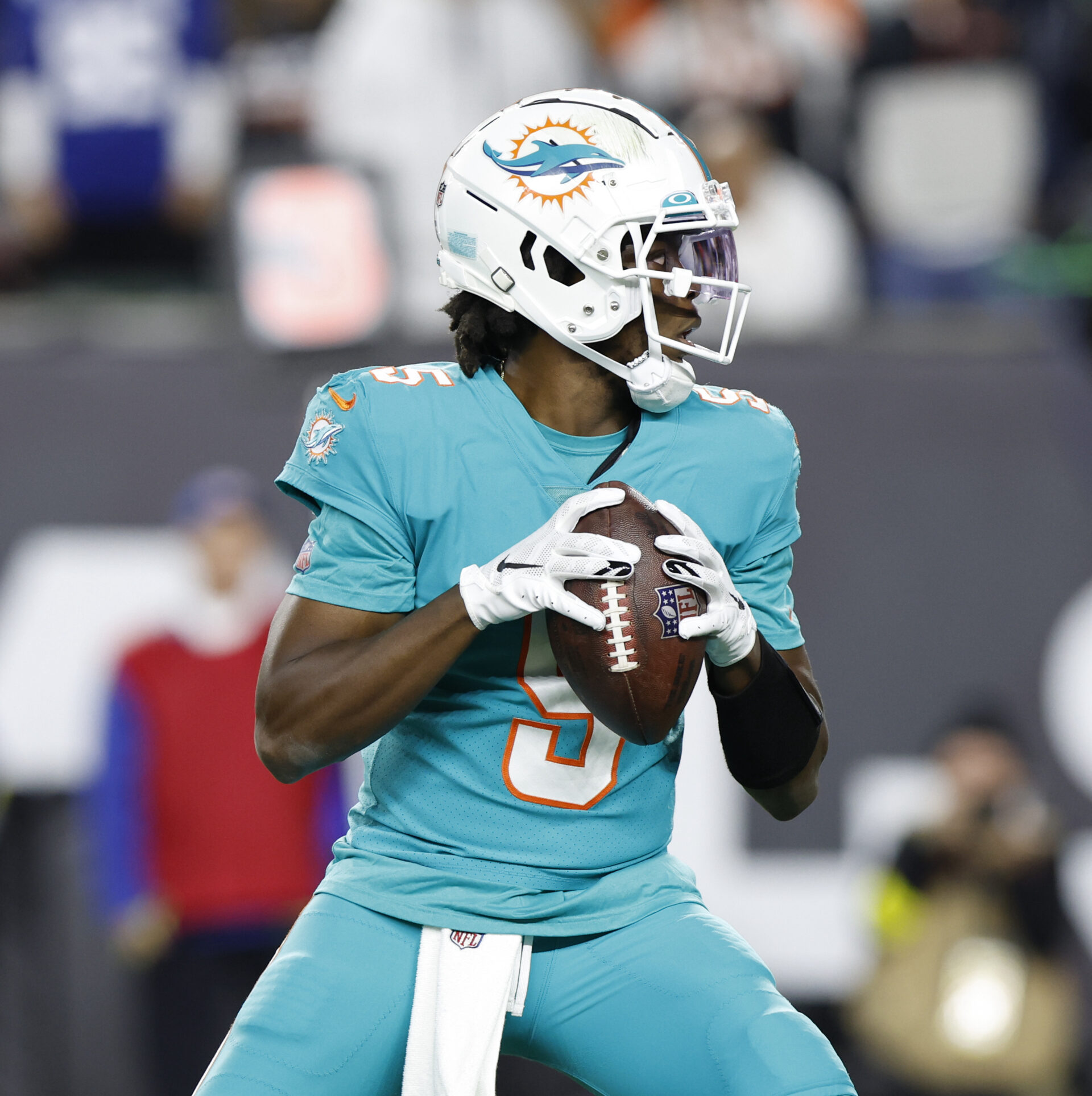 After a full month of NFL football, The Miami Dolphins remain one of the league’s pass-heaviest teams. And, with Tua Tagovailoa sidelined for a while, the offense is about to undergo a Teddy Bridgewater takeover. The Dolphins have a road date with the New York Jets this week — kickoff is at 1:00 ET. And, in a nice matchup, the Dolphins’ interim starting QB headlines our favorite NFL Props for Week 5.

Bridgewater is arguably the most competent backup quarterback in football, so Miami’s insurance plan should be able to jump in right where Tua left off. With elite weapons like Tyreek Hill and Jaylen Waddle on the outside, look for Miami to continue leaning on the pass. And, it would not come as a surprise if the Jets weren’t able to stop one of the league’s most creative offenses this Sunday.

There may not be a huge difference between Tua Tagovailoa and Teddy Bridgewater. The former Alabama quarterback was playing the best football of his professional career before his concussion last Thursday night.

Miami has struggled immensely to get their run game going. So, they’ve leaned on their quarterbacks to get their offense going through four games. They only trail the Chiefs, Bills, and Chargers in Pass Rate Over Expected thus far. So, it’s clear that head coach Mike McDaniel believes in his passing attack a ton. Even if Miami doesn’t have Patrick Mahomes, Josh Allen, or Justin Herbert, they should still be expected to air the ball out against the Jets.

The Dolphins have been a hyper-efficient passing attack in 2022. Even after Teddy Bridgewater subbed in on Thursday Night Football, there wasn’t a large dropoff from Tua’s production. Miami ranks 2nd in yards per attempt, 3rd in expected points contributed by passing offense, and 5th in completion percentage.

Meanwhile, Miami’s run game does not profile as an elite component of their offense. They average a league-worst 20.0 rushing attempts per game. And, despite the low volume, they’re rushing for only 3.5 yards per attempt, good for the 5th-worst.

The Dolphins have completed at least 22 passes in three of their four games so far, averaging 23.5 per game. And, they should continue to rely on the aerial attack with Teddy Two Gloves on Sunday.

Per NFL Network’s Cameron Wolfe, McDaniel even said “the team’s offense won’t change much” with Bridgewater starting. Wolfe mentioned that Miami should look for Tyreek Hill and Jaylen Waddle in the short passing game the same as before, which is fantastic news for this over.

There is a zero percent chance of precipitation at MetLife stadium around game-time, and Miami has turned to the air over and over again throughout 2022. With the Jets’ defense lined up across Bridgewater, that should only make us feel better about a pass-centric game plan.

This is right in line with New York’s league-worst pass defense in 2021. Sure, rookie Sauce Gardner is a stud. But, the Jets’ secondary still has far more room for improvement than their run defense.

Teddy B should step right into the Miami offense and feed his elite receivers all afternoon. Without a tough secondary or any weather concerns, this could be a smash spot for Bridgewater and the Miami pass attack.

Have fun playing our best NFL Props for Week 5 and Join us for the rest of the NFL season!