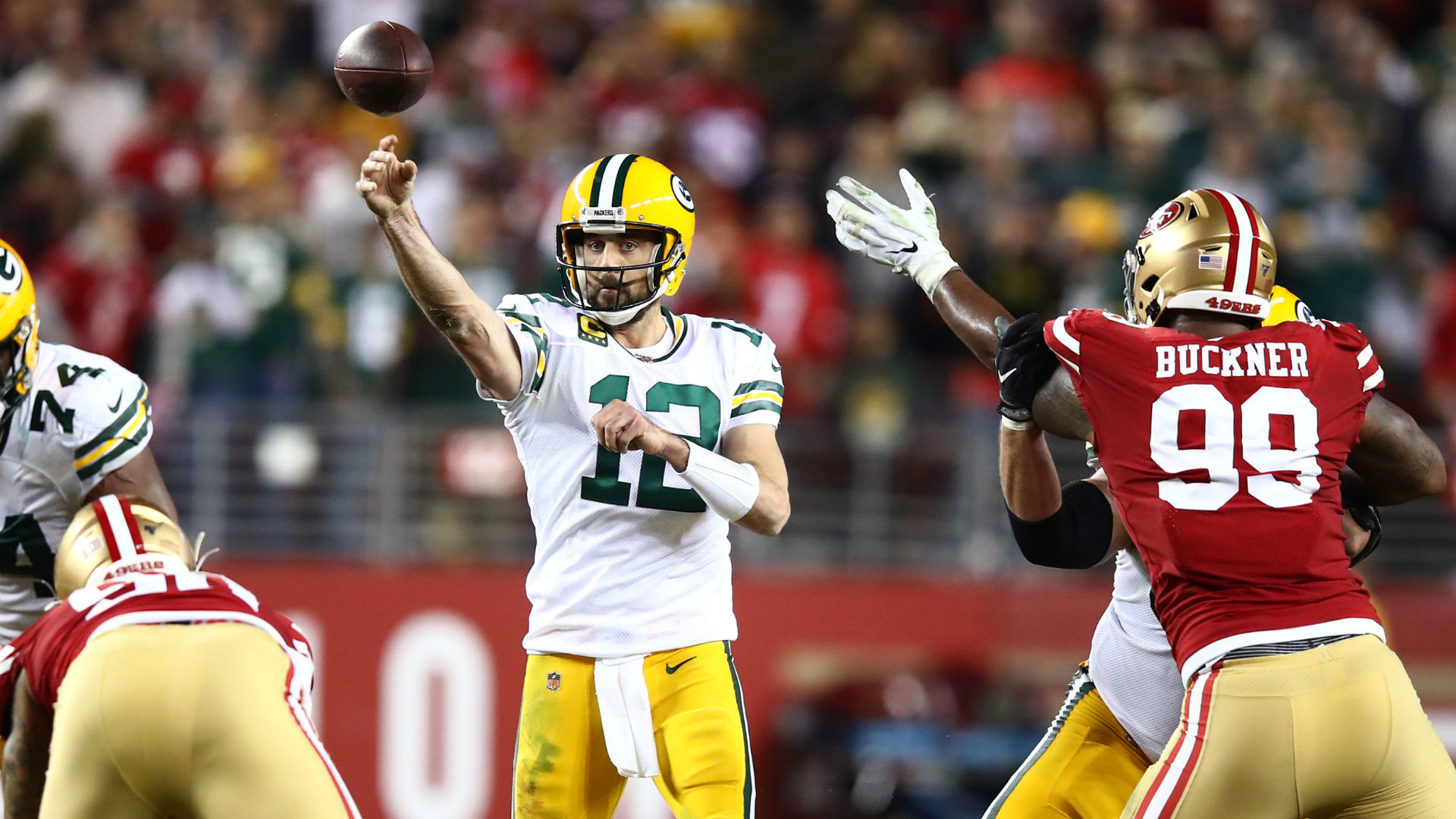 Unlike regular season slates, we’re treated to some early-week releases of prop lines during the playoffs, so while it’s only Wednesday, it’s already time for a premature peek at some player props for Packers 49ers.

It’s the second meeting between these teams on the season, and as we’re about to find out, the first one was an unmitigated disaster for Aaron Rodgers. And with the 49ers defense as healthy as it’s been all season, Green Bay in tough as 7.5-point road underdogs in the NFC Championship Game.

Rodgers is where we kick off our prop coverage for Championship Weekend, and we’ll follow that up with analysis on what looks like a soft rushing line for Raheem Mostert.

Join us here for special playoff pricing and get all of our prop plays through the Super Bowl.

Rodgers is fresh of a 243-yard home outing against a Seahawks defense that allowed the sixth-most passing yards on the season (275.4/game).

Now he’ll hit the road to test a 49ers side boasting what might be football’s best secondary.

All three of those QBs had one key thing in common — they all needed 40 or more pass attempts to get there. That’s a mark that Rodgers as hit just twice in 17 games on the season, as the Packers play a down-tempo offense, running 63.5 offensive plays per game, 19th fewest.

Without the benefit of volume, Rodgers is going to need to be efficient on Sunday, something he simply hasn’t been on the season. 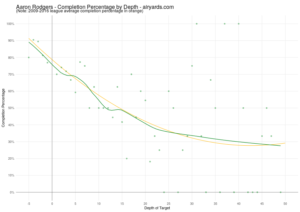 The only QBs to hit our target passing mark of 240.5 have been reasonably efficient with huge volume, neither of which we should expect to see out of Rodgers in San Francisco, “revenge game” or not.

That was the case when these teams met at this venue in Week 12, as Rodgers managed 104 yards on 20 attempts. His 3.2 yards per attempt in that game was the worst mark in any of his 174 career starts.

It was one of several sub-par road performances this season. Rodgers is hurt by the same home-road splits that plague so many other QBs, passing for 18.8% fewer yards when away from Lambeau Field. 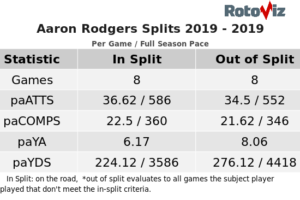 Unsurprisingly, San Francisco’s pass defense also performs much better at home, allowing an average 157.6 yards against at Levi’s stadium versus 198.5 in away games.

Note: There are still plenty of options around this number available as of Sunday morning. The best we’ve found is U244.5.

The first looks at this prop went up at Draft Kings early Wednesday morning and have already been bet down to 237.5 yards, giving us a touch of extra early-week value on this 240.5 line.

Add in a low point total of 45 between these two pace-adverse teams, and Rodgers is going to need a few breaks to hit the over.

Here’s what I think — I think the oddsmakers looked at Mostert’s total of 12 carries from last week and said, “meh, 11.5 carries seems about right for this one!”

Digging a little deeper, we know Mostert hit actually that 12-carry mark through three quarters against the Vikings, then missed the fourth with cramping. With the 49ers playing with a solid lead, another 3-4 carries from Mostert would’ve been a near lock, and this line would’ve been set at something closer to 14 this week.

Instead, it’s 12, and we’re compelled to bet into this line.

It turns out that Mostert was battling some type of illness throughout most of last week, which would explain the cramping, but it’s not expected to be a concern going forward.

Tevin Coleman came out of nowhere to lead the 49ers in rush attempts against Minnesota with 22, but in the five weeks before that, he never had more than 5 attempts. Given how erratically Kyle Shannahan has used his RBs this year, there’s no guarantee that Coleman will lead the way again.

If there’s been one constant in the San Francisco backfield over the back half of the season, it’s been Mostert, who leads the team in every rushing category over the last eight games, including earning by far the highest share of carries at 42%.

Also consider that Matt Breida lost a fumble in the fourth quarter last week, which could earn the trusty and more-effective Mostert a few more carries.

It would make a ton of sense for San Francisco to attack the Packers where they’re weakest — in the run game. Green Bay allowed the seventh-most RB rushing yards on the season (109.3/game) on the 14th-most attempts (22.5/game).

In fact, it may have been the matchup against the Packers in Week 12 that prompted Shanahan to promote Mostert. He was averaging 7.3 attempts per game coming into that game, but after he averaged a season-high 7.5 YPC against the Packers (45 yards on 6 attempts), Shanahan went out and gave him 19 carries against Baltimore the following week. Mostert hasn’t had fewer than 10 rush attempts since.

Everything points to Mostert re-taking the backfield lead this week, and the 7.5-point spread suggests he’ll get plenty of opportunities.

If this line moves to At Least 13 Carries, I would pivot to “At Least 55 Yards” on the Builder instead.