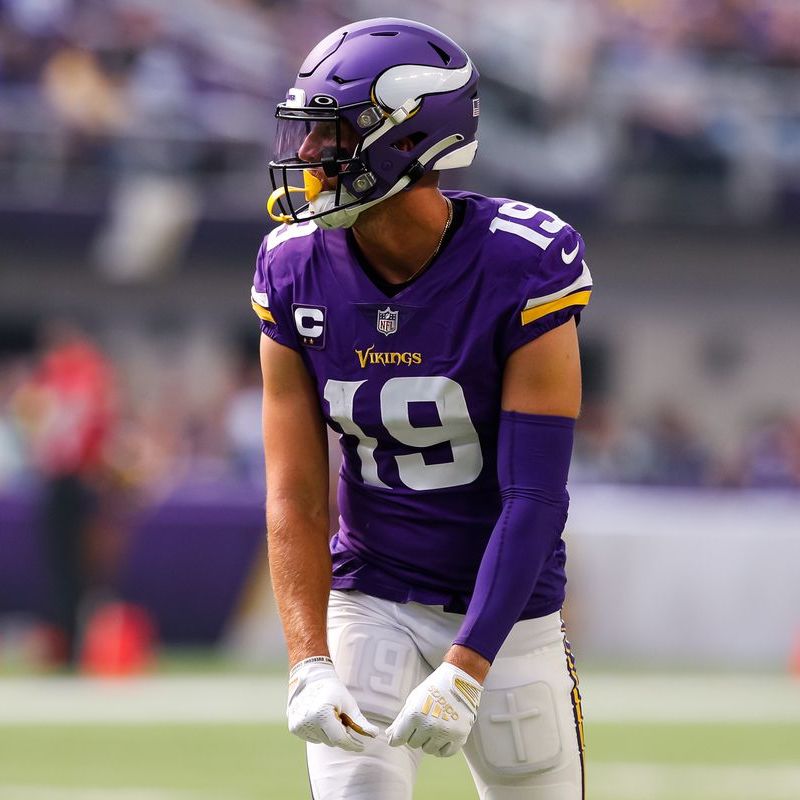 The smells of turkey, pumpkin spice, and NFL football are in the air. The 2022 edition of Thanksgiving has arrived, and an excellent slate is on tap. Let’s dive into our favorite NFL Props for Thanksgiving.

The New England Patriots are visiting the Minnesota Vikings — kickoff is at 8:20 ET. New England enters this primetime showdown with a 3-game winning streak and a 5-1 record since Week 5. Meanwhile, Minnesota is the first team in NFL history to win at least 8 of their first 10 games and hold a negative point differential.

The Patriots’ secondary has been dominant, and now they’ll go head-to-head with an inconsistent Vikings passing attack. Adam Thielen is clearly on the decline and after the acquisition of TJ Hockenson, he’s become decreasingly crucial to the offense. In a brutal matchup on Thursday night, it might be tough for Thielen to get going.

This prop has been a massive money-maker for us all season long. Adam Thielen is not the same player he was a few years ago. The 32-year-old has cemented his place as one of the worst after-the-catch receivers in football.

Now, with the Patriots coming to town, the chances Thielen rips off a big play on Thanksgiving night are slim.

The veteran wideout has recorded only three receptions of at least 20 yards this season. He’s seen 67 total targets and caught 45 of them, but just 6.7% of those catches have gone for 20-plus yards.

His 7.3 yards per target is the lowest mark of his nine-year career, while his 2.1 yards after the catch per reception is also a career-worst. 91 receivers and tight ends have seen at least 40 targets in 2022. Thielen ranks 90th out of 91 in YAC per reception. So, what does abysmal after-the-catch ability lead to?

The Vikes receiver has cashed this under in 7 of 10 games this season, including two misses at 21 and 22 yards. He has just one catch of more than 22 yards this season, and the recent addition of tight end TJ Hockenson only makes Thielen’s life more difficult.

Between Thielen, Hockenson, Justin Jefferson, KJ Osborn, and Dalvin Cook, there are plenty of mouths to feed in Minnesota. And, given Thielen’s decline in athleticism, there’s no clear path to production in an extraordinarily challenging Thanksgiving matchup.

Even if Thielen racks up the most targets he’s seen since the Hockenson trade, the Pats will probably still have his number.

New England has faced 14 receivers that have seen at least 6 targets this season. Only 5 of the 14 have recorded a reception of longer than 20 yards. And, every guy on that list is a better athlete than Thielen at this stage of his career. This matchup is nightmare-fuel for the Vikings this Thursday.

Adam Thielen is showing obvious signs of decline, and is in an offense featuring plenty of other talent. In a matchup against New England’s league-best pass defense, this is a perfect opportunity to fade the receiver.

Enjoy playing our NFL Props for Thanksgiving and Join us for the rest of the NFL season!