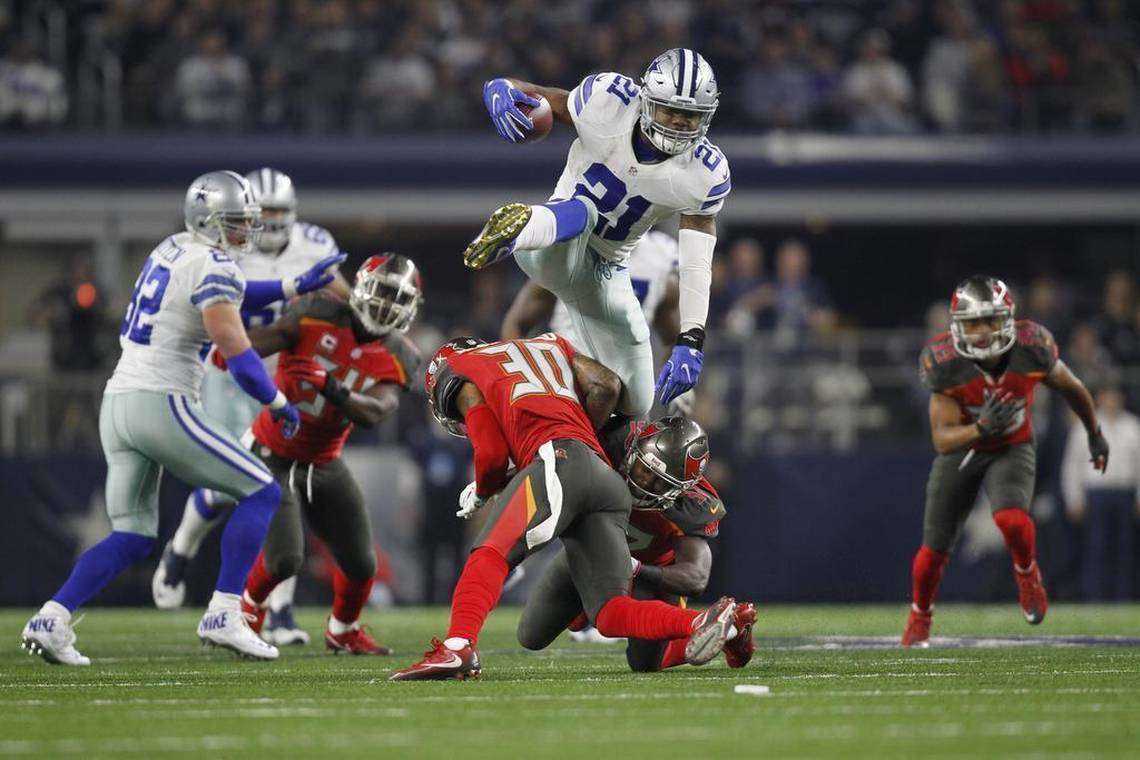 It’s time to dig into the strongest player prop trends for tonight’s Super Wildcard Weekend matchup between the Cowboys and Buccaneers. We’ll take a closer look at the statistical trends and key matchups that are likely to impact the performance of various players in this game, including Ezekiel Elliot, Dak Prescott, Tony Pollard, and Rachaad White.

Our NFL props are on fire, hitting 64% over the last three months — join us here to get all the plays delivered to your device.

As always, these are not necessarily recommended plays, but we’ll attempt to provide some context to these numbers to help you make your decisions. Let’s jump in. 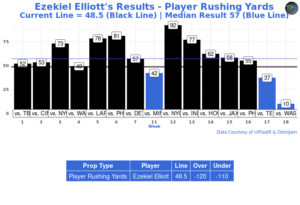 The betting markets aren’t expecting much from Elliott tonight, setting his line at a modest 48.5 rushing yards. He’s hit that mark in 14 of 17 games (80%) with a median result of 57 yards.

The Cowboys are small favorites here and the Bucs haven’t been gangbusters on run defense like in recent years, so Zeke has a real chance of extending his rushing props hot streak. 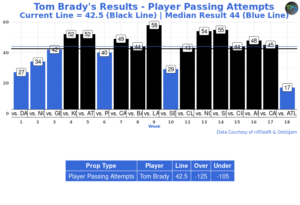 Tampa Bay fields one of the worst offensive lines and worst running games in the league. They’ve had to lean heavily on the arm of 45-year-old Brady as a result.

Excluding the final game against Atlanta where he was pulled early, Brady has gone over his Passing Attempts prop of 42.5 in six-straight games and 11 of 16 overall.

It’s a huge number to attack, but Dallas can score points, the spread suggests another Brady-friendly game script. 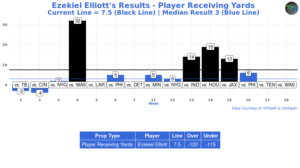 Back to Zeke, who hasn’t been near as consistent in the passing game as he has in the run game.

He’s gone under his prop of 7.5 Receiving Yards tonight in 13 of 17 games with a median result of just 3 yards.

This will be another tough spot to get over: 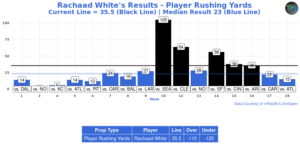 White’s rushing yards prop opened at 40.5 yards (which was good enough for us to make an official BTP play on the under), and while it’s now down to 35.5, that’s still a number worth considering.

Thanks to a banged-up offensive line, the Bucs have simply been bad running the ball all year, with White averaging 3.7 YPC and Fournette just 3.5 YPC.

And while they like White, it would not be at all surprising if the Bucs leaned heavily on “Playoff Lenny” tonight. 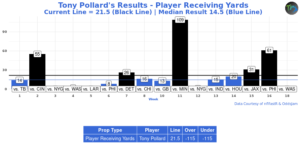 As explosive as he’s been at times, Pollard’s work in the passing game hasn’t met expectations from the betting market.

Somewhat surprisingly, he’s only hit this mark of 21.5 Receiving Yards 31% of the time this year, with a median result of 14.5.

As mentioned, the Bucs have been excellent at defending RBs in the passing game, so this shapes up as another tough spot for Pollard.