Our best MLB K Props today key in on Houston’s Zack Greinke, who faces a tough test against a contact-happy Royals lineup.

Greinke pitches to plenty of contact himself, setting up a nice spot on the under on a pitcher who’s owned the unders all year long.

Get in on our NFL Early Bird Special today. We’ve hit over 60% in each of the last two seasons, doing it with the consistency and transparency that other handicappers can’t touch.

Note: We released this at -132 for our subscribers this morning, but still like it at this price. Join our sharp & friendly betting community and never miss the best price.

The 37-year old is hitting career-lows in strikeouts this season. He’s missing fewer bats than ever, and his 17.9% kRate ranks in the bottom-12th percentile among all pitchers. 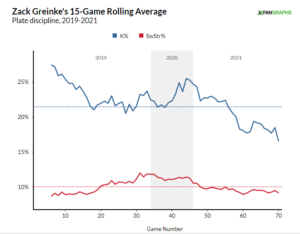 He failed to strikeout a single batter in his last start, which happened to come against these Royals.

The Royals have been one of the worst offenses in baseball this year with a wRC+ of 88 ranking 25th.

However, one thing they do is swing away and make contact.

They also rank third in Chase% (swinging at pitches outside the zone), and while that can sometimes equate to a high K%, that hasn’t been the case with KC. Despite all their shortcomings, they own the third-best kRate this year (21.7%), behind only Toronto and Houston.

That’s translated to the prop market as well, with the Royals holding 60% of the pitchers they’ve faced under their closing total, including 12 of the last 14.