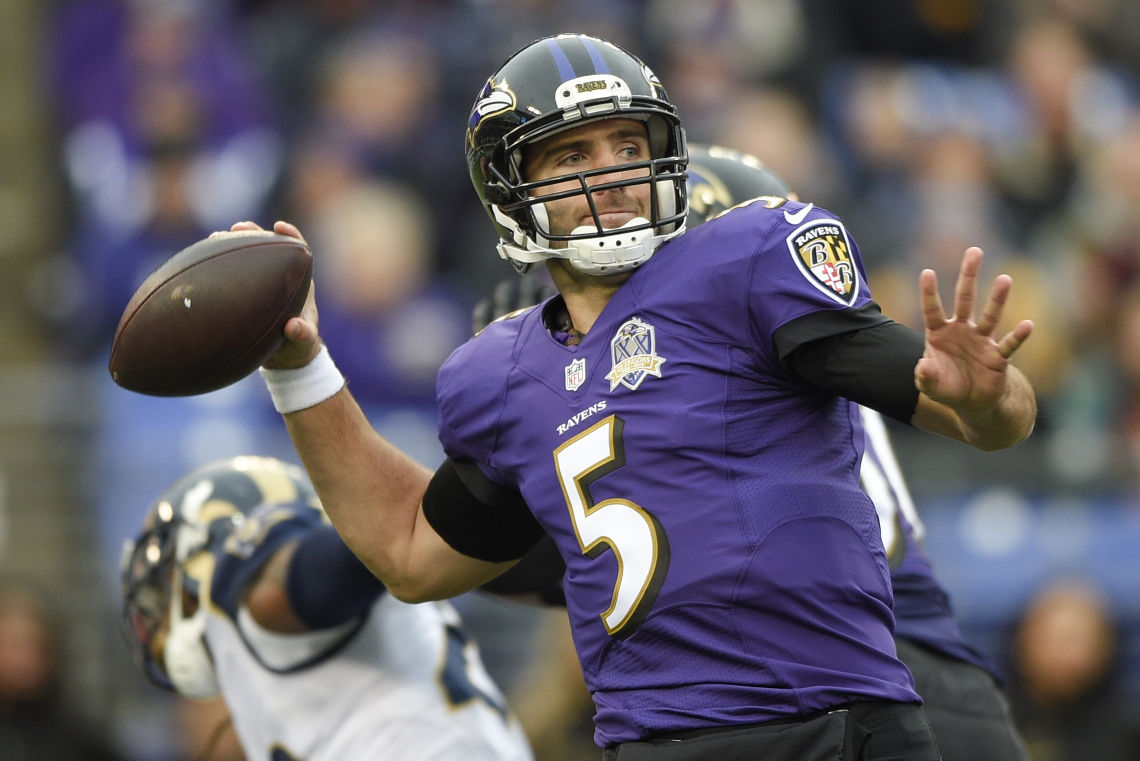 I don’t like betting on a Joe Flacco any more than you do. He’s an unsexy quarterback in an unsexy offense, but sometimes you just have to swallow hard, hold your nose, and collect the easy cash.

That’s about what’s being offered up according on the yardage prop betting line.

Here are three reasons why he’ll do it.

We tend to give more weight to events which happened in the recent past, and Flacco fails the “what have you done for me lately?” test.

You might remember that he passed for just 3,141 yards last year, his lowest total since he was a rookie in 2008. However, you might not recall that the year before that, he was seventh in the league in passing with 4,317 yards — more than Andrew Luck.

In fact, he passed for, or was on pace to pass for, more than our 3,225.5 mark in eight-straight seasons before 2017. Remember, he only needs 201.7 yards per game to hit the over, and he’s obliterated that mark in every single season but two — his rookie year, and last year. 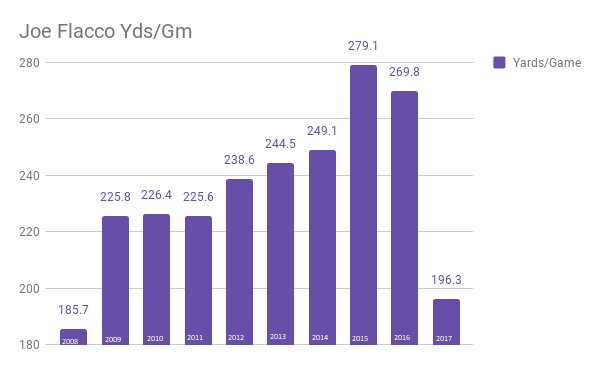 One of these things is not like the other. The 2017 season is a sore thumb, and there’s no reason to think a repeat is in the works.

Even at his worst, with a bottom-barrel wide receiving corps, Flacco still only fell five yards per game short of 3,226 yards last year.

More to that last point.

Wallace did so well that the Ravens let him walk for nothing, while Perriman continues to be one of the biggest first-round busts in recent memory. Maclin had 440 yards and is now in street clothes.

Baltimore upgraded their pass catchers across the board for 2018. Free-agent acquisition Michael Crabtree gives Flacco his most reliable target since Steve Smith retired.

John Brown has battled a mysterious sickle-cell illness in recent years but has a 1,000-yard season to his name. He’s been the talk of Ravens camp so far, finding a downfield connection with Flacco in practice in in games. If he’s right, and it appears that he is, Brown is simply one of the best deep threats in the league, and even a couple of splash plays would be a huge boost to Flacco’s yardage total.

Willie Snead fell off the map last year, but he looked awfully good going for 900 yards in each of his first two seasons.

Are all these upgrades worth five yards per game for Flacco? I’ll take that bet.

We used projections from some of the sharpest minds in fantasy football to identify all of the best season-long player prop values for this season. We did this by comparing the player’s over/under line to three sets of projections to find out where the lines might be off.

Flacco not only showed popped as a value, but he was by far the best bet on the board, better even than Drew Brees.

He surpasses his yardage prop line by an average of 408 yards; numberFire puts him past the mark by nearly 500 yards.

This line is simply off. Unless bookmakers know something that we don’t about Flacco’s health, it’s hard to see him passing for fewer than 206 yards per game.

Injuries are always a risk, and the Ravens did spend a first-round pick on QB Lamar Jackson, but he’s been erratic in the preseason and is unlikely to be starting games in 2018.

That leaves the unsexy Flacco with one of the most appealing player props of 2018.