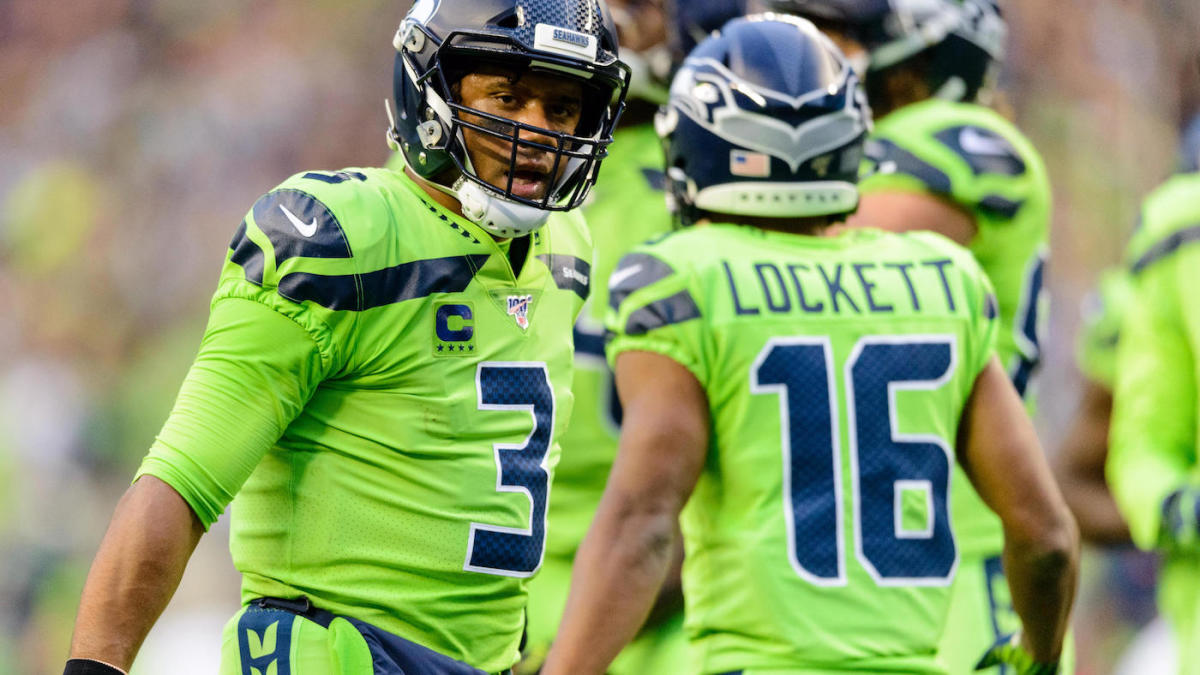 We’ve got two TNF props for Seahawks Rams for you tonight, including looks at Seattle WR Tyler Lockett, plus a solid spot for Rams TE Tyler Higbee.

Lockett has the kind of boom-bust profile that can be profitable to fade, and that’s where we kick things off.

Keep in mind most of the value for this game has already been sapped from the market, so consider these slightly lower-confidence plays — we’re playing them for half-unit leans (0.5% of your betting bankroll).

Article plays are now 18-7 on the year, while our subscriber picks are 48-33 for +10.3 units — join us here to get full weekly slates of NFL props (plus NBA & more) delivered to your device.

Forget five, Lockett has only topped four receptions once this season, and that came against an atrocious Titans secondary that allows more yards to WRs than any team in the league.

Going back to the midway point of last season, Lockett has hit this number in just 4 of his last 14 games. 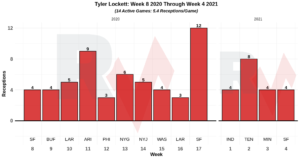 The average result of 5.4 doesn’t look too bad, but that’s boosted by a few blowup games. As prop bettors, we’re far more interested in his median result of 4 receptions over that extended stretch, as it’s by far his most common result.

Ironically, one of the factors working against Lockett’s volume is that the Seahawks offense is almost too efficient.

Combine that with the fact that the Seahawks are running the third-fewest total plays in the league (50 plays per 60 minutes), along with a 55% pass rate, and you get a recipe for the kind of 23-attempt game we saw from Wilson last week.

They’re obviously going to have to pass more against the Rams tonight, but that was also the case last year when Lockett put up reception totals of 5 and 3 in his two matchups with the Rams.

In fact, you have to go all the way back to the 2016 season to find the last time he hit this number against his divisional rival. In his career, he’s averaging just under four receptions per game against LA.

Higbee has been a consistent presence in the Rams powerful passing attack. Other than a Week 2 dud against a linebacker-loaded Colts defense, he’s hit this number in every game.

He came up just short in two matchups with the Seahawks last year, recording three receptions in each, but Higbee was a focal point of the offense in those games, with his 6 targets in each of those games representing season-highs.

With Gerald Everett gone in free agency, Higbee is on the field more than ever with a 86% snap share on the season so far, while his 13% target share is third on the team behind only Cooper Kupp and Robert Woods. 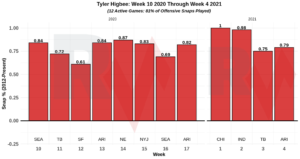 Seattle has basically played no one at TE so far this season, and yet they’ve still managed to give up the 15th most receptions to the position.

This is a team that was tagged for 70 yards on 7 receptions by Tyler Conklin, so we like the more talented and targeted Higbee’s chances of getting fed tonight in a game that sports the week’s second-highest point total (54.5).