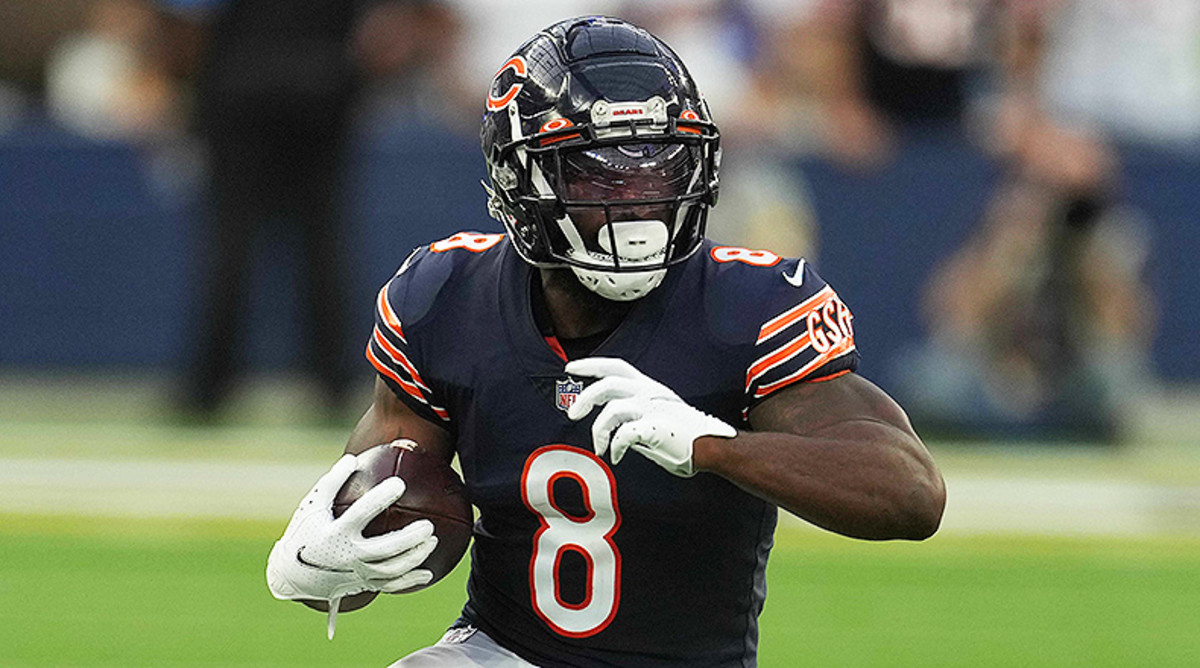 After a Thursday Night showdown between the Rams and Seahawks that saw Bet The Prop go 1-1, I’m thrilled to put out two rock-solid plays for this weekend.

I am 6-2 with Bet The Prop this NFL season after going 1-1 in this space last week.

It’s time to consider two players who will be seeing certified volume in Week 5. Let’s jump into the plays.

Damien Williams is perfectly set up to take over as the Chicago Bears workhorse running back for the immediate future. Chicago’s top back, David Montgomery, went down with a knee injury last week and is expected to miss the next month. This injury opens the door for Williams to be the primary runner in the Bears backfield.

Montgomery played at least 80% of the offensive snaps in two of Chicago’s first three games this season. And, going back to 2020, Monty had hit this mark in 11 of his last 16 games for the Bears. Chicago’s top ball carrier managed 17.3 carries and 77.3 rushing yards per game through the first four weeks of the season. This is nearly an every-down player who has now disappeared entirely from the offense and leaves a massive hole to be filled.

Williams out-snapped rookie RB Khalil Herbert 17-9 last week, good for just over 65% of the non-Montgomery snaps in Week 4. However, his season-long command of the snaps is much more impressive. Williams has out-snapped Herbert 71-10 through four games, an 88% share of non-Montgomery RB snaps. It doesn’t seem like Head Coach Matt Nagy is quite ready to throw Herbert into the mix too heavily.

Damien out-carried Herbert 8-3 last week, and again should handle at least 75% of the backfield touches in Week 5. With the Bears leaning heavily on the run recently, this sets the talented Williams up for 15-17 carries on Sunday.

Williams will draw the Raiders in Week 5, who have struggled mightily against the run dating back to last season.

Las Vegas is allowing 4.9 yards per carry, the fourth-worst mark in the NFL. This is hardly an improvement from last year, where they allowed 4.6 YPC and ranked eighth-worst in this department. The team also ranked eighth-worst in Expected Points Contributed by Rushing Defense in 2020 and still looks to be a favorable matchup for opposing runners.

Vegas has allowed 60+ rushing yards to an opposing back in three of four games this season, and 15/20 games going back to last season.

Running backs locked into a starter-level volume like Williams have done even better. Since 2020, 14/17 players to see at least 12 carries have rushed for 60+ yards against this Raiders rush defense.

Williams should easily exceed the 12 carry mark, too. In fact, nine of ten players to see 14+ carries during this same stretch have hit the over on his rushing prop.

The now-starting RB for Chicago is an efficient runner, totaling 65+ yards in 5/6 career games with 12+ carries. He posted 55 yards on just 8 carries in relief of Montgomery last week, and I can’t wait to see what he’ll do with a full game’s worth of touches this weekend.

This line seems massively mispriced for Las Vegas Raiders WR Hunter Renfrow. He is a multi-talented and versatile football player, excelling in special teams and on punt returns this season, flashing some defensive ability in Las Vegas’ last game.

Renfrow is actually much more than a hard-hitting safety, as he displayed on Monday Night Football last week:

The Raiders’ slot man has remarkably recorded at least five catches in every single game this season. Renfrow is one of only eight players to record five-plus catches in every one of their contents in 2021. He has been as consistent as they come, with targets from Raiders QB Derek Carr flowing consistently too.

Renfrow has averaged 5.5 catches per game and has seen 7.5 targets per game. The wideout even saw his snap share rise last week, as shown in his game log below.

The Clemson product also draws a plus matchup against the Bears defense in Week 5. Chicago has allowed seven players to catch at least five passes in just four games thus far. This includes a wide receiver recording 5+ receptions vs. Chicago in each game this season.

Going back to last season, the Bears have allowed an opposing wideout to reach the five-catch threshold in 18/20 games since 2020. The Bears also have struggled against slot receivers in particular lately, giving up seven receptions to Tyler Boyd and Cooper Kupp this season.

The Bears are in the middle of the pack in receptions allowed to wide receivers this season, and shouldn’t prohibit Carr from finding his dependable short-throw option in Renfrow.

Damien Williams is a legitimately talented running back destined to step into 15+ carries against a porous Raiders run defense. This combination of certified volume and a soft matchup makes this a smash spot.

Additionally, Hunter Renfrow has been killing this over on a weekly basis, and I don’t expect the Bears to bring this trend to a stop.

Enjoy playing these props for Week 5, and join us for months of NFL props to come!