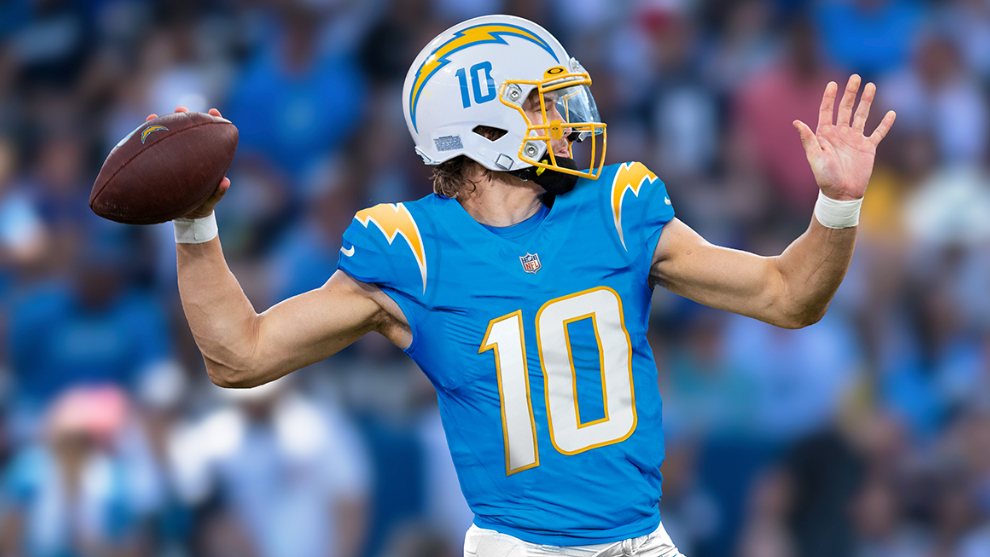 We’re tackling Justin Herbert props for the MNF matchup between the Chargers and Raiders, keying in on what has been one of the league’s heaviest passing attacks so far.

Both these teams are passing above expectation and running a ton of plays in general, so we like the looks on a couple of overs in the game, and this one passing prop from Herbert in particular.

We’re coming off a win on Sunday Night Football, and we’re now 17-7 (71%) on free picks the season. Join us here to get our full weekly slates of NFL props delivered to your device.

Passing attempt props are all about pace of play and anticipated game environment, and with one of the week’s highest point totals (51.5) and two of the pass-heavy teams going at it, those factors line up well for us tonight.

The Chargers have shed any notions of being a conservative offense under new offensive coordinator Joe Lombardi. They are among the most aggressive teams in football in the early going, with the second-highest pass rate over expectation, behind only the Buccaneers.

Pass rate over expectation overall and in the red zone through three weeks.

Continue to love what the #Chargers are doing.#Titans haven’t been more aggressive than last season despite the Julio addition. pic.twitter.com/Is4LbG4Agw

Basically, they are running as many plays as any team in the league and are passing on them at a higher rate than expected. That’s a great combination for Herbert, who’s hit this number in 10 of his last 14 games since coming off last year’s bye week. 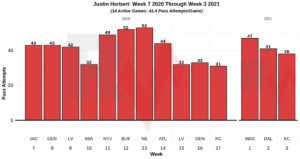 While the Raiders pass defense has actually been pretty good from an efficiency standpoint, ranking ninth in Expected Points Added allowed per dropback, their pace of play has allowed opposing QBs to rack up some raw numbers.

Las Vegas boasts the third-best yards per attempt allowed to opposing QBs (6.3 YPA), behind only the Broncos and Bills, but the sheer pace of their games means that those QBs have attempted 39.7 attempts per game, the sixth-most allowed by any team this season.

Teams play fast against the Raiders, in part because Derek Carr has been excellent, leading the league in passing yards per game, as well as yards per attempt (8.8).

Offenses facing Vegas average a snap every 26.2 seconds, second-fastest, while running a total of 968 plays — 100 more than the next-closest team coming into Week 3. Granted, that includes an overtime game, but anyway you want to break it down, this sets up as a fast game.

The Chargers have shown that they’re happy to let their sophomore star QB air it out, and the Raiders fast and efficient offense should force them into another pass-heavy gameplan under the lights tonight.