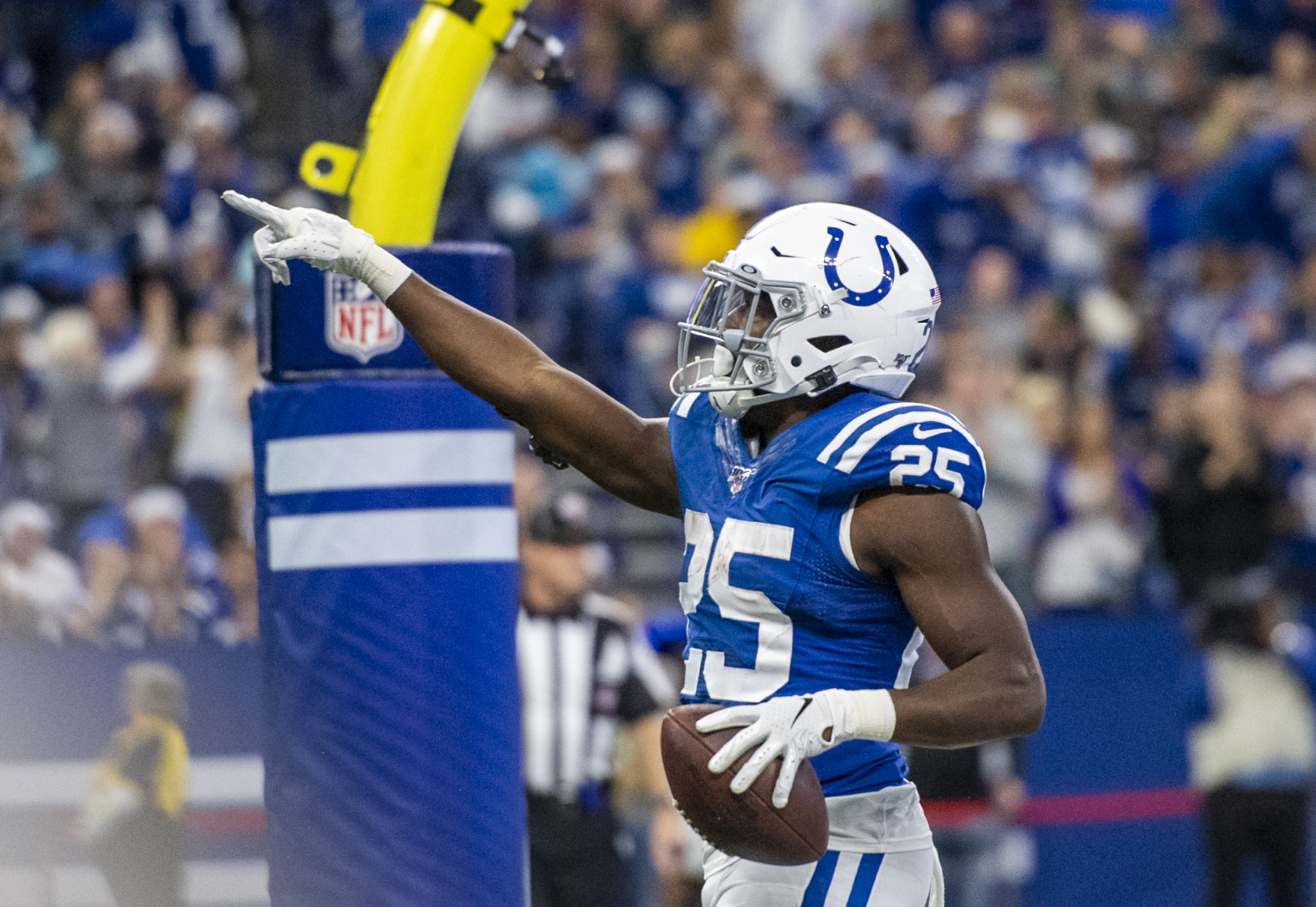 Sunday Night will feature hard-nosed football weather at Levi’s Stadium in San Francisco. We’ll be getting heavy rain, wind gusts around 20 mph, and all different weather iterations in-between. So, with the weather in mind, our team has targeted two SNF props for Colts 49ers.

Given the wet and windy conditions, I’m expecting these two teams to go rush-heavy, and one Indianapolis running back who’s in a prime spot to take advantage.

However, these two will have to throw the ball at least a little. And there’s a San Francisco wide receiver whose reception total poses value.

While we’re confident in our analysis, we remind you that these two plays are considered leans. That means you shouldn’t risk more than 0.5 units per play (or 0.5% of your total betting bankroll).

But with that in mind, let’s dive into our favorite SNF Props for Colts 49ers.

If the weather is a factor as expected, the Colts are likely to run the ball and play defense. As such, everyone in the Indianapolis backfield should see an uptick in attempts.

The Colts have a three-headed rush attack of Jonathan Taylor, Nyheim Hines, and Marlon Mack. Taylor is the clear bell-cow back, but while Hines’ usage has varied greatly, Mack gets a consistent number of carries each week, enough to cover this low number.

He’s missed a couple of games this season, but so far, Mack has posted stat lines of:

So, Mack should get his fair share of opportunities in a rush-heavy offense this Sunday Night. That bodes well for a guy who hit this number in three of four fair-weather games this season.

As such, the projection market is high on Mack in this matchup. I’ve seen a projection spread of 16.0 to 20.0 on Mack’s rushing yards this Sunday night, with Run the Sims projecting his median rushing yards at 19. 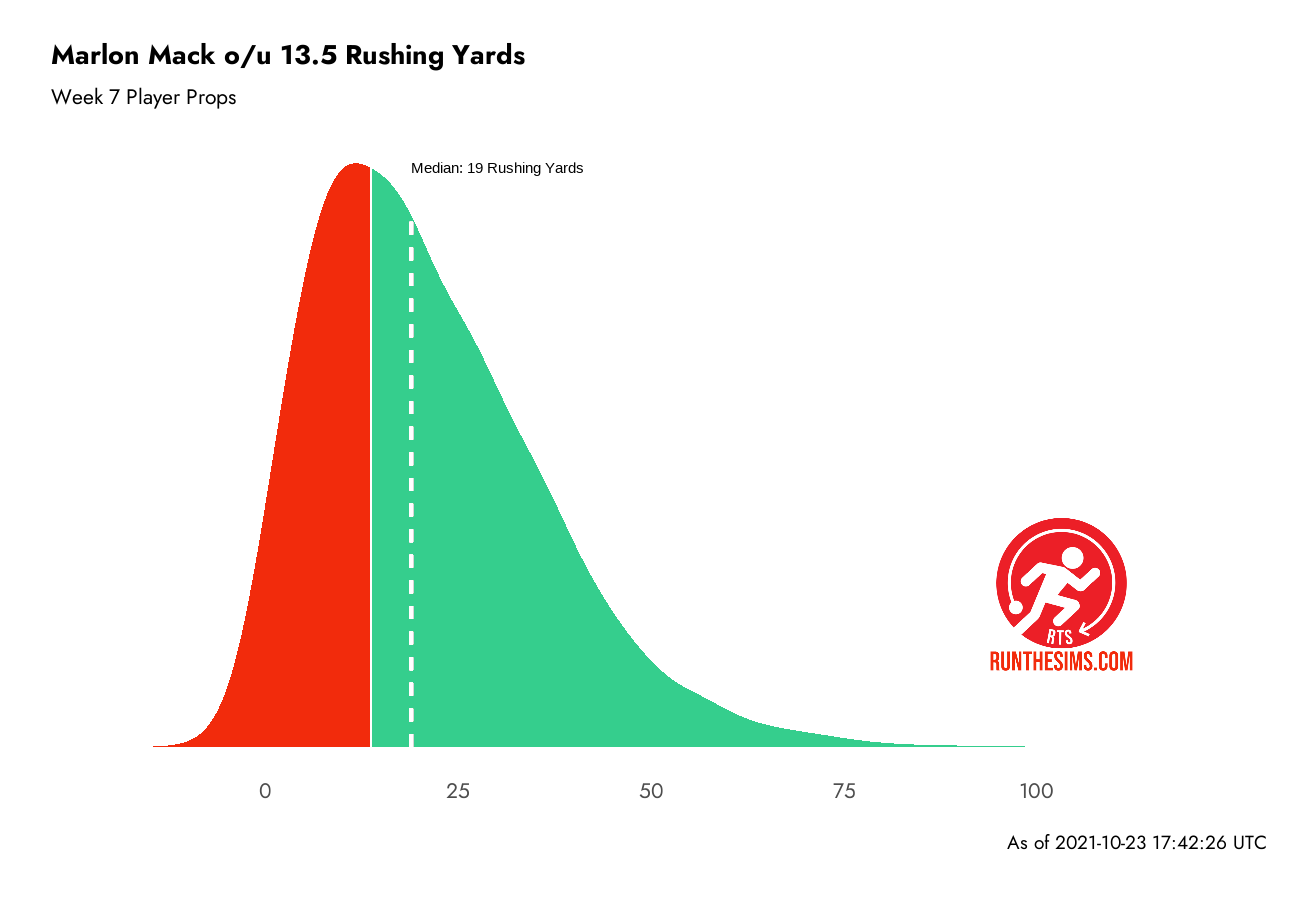 All-in-all, Mack will have plenty of opportunities in the Colts ground game Sunday night, and our research and the projections see him cruising by this low number.

The 49ers are also likely to go rush-heavy in the stormy weather, but Jimmy Garoppolo will have to throw the ball a few times. With George Kittle on the IR, Mohamed Sanu should again see an uptick in usage. 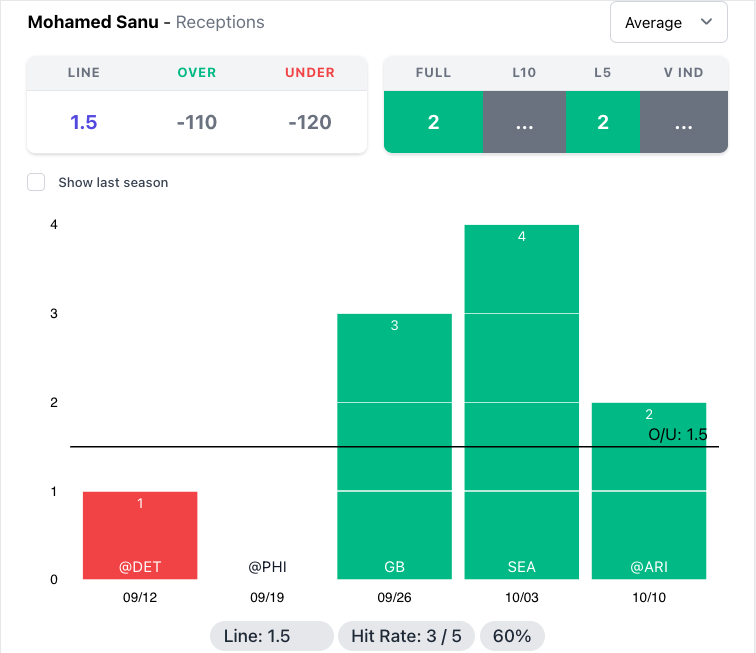 With Sanu compiling 14 targets in that three-game stretch, it’s fair to think Garoppolo will look his way a few times in this game, as Sanu will be the No. 3 option behind Deebo Samuel and Brandon Aiyuk. And while I expect the 49ers to be limited in their air attack, 1.5 receptions is such a low line that the over is bound to hit.

Plus, Indianapolis hasn’t performed well against the pass this season, ranking 29th in Football Outsiders’ Pass Defense DVOA. That also provides Sanu a slight boost for this Sunday Night.

I’ve seen a 2.3 to 2.6 projection spread for Sanu’s reception total on Sunday Night, and that creates plenty of value on the over.