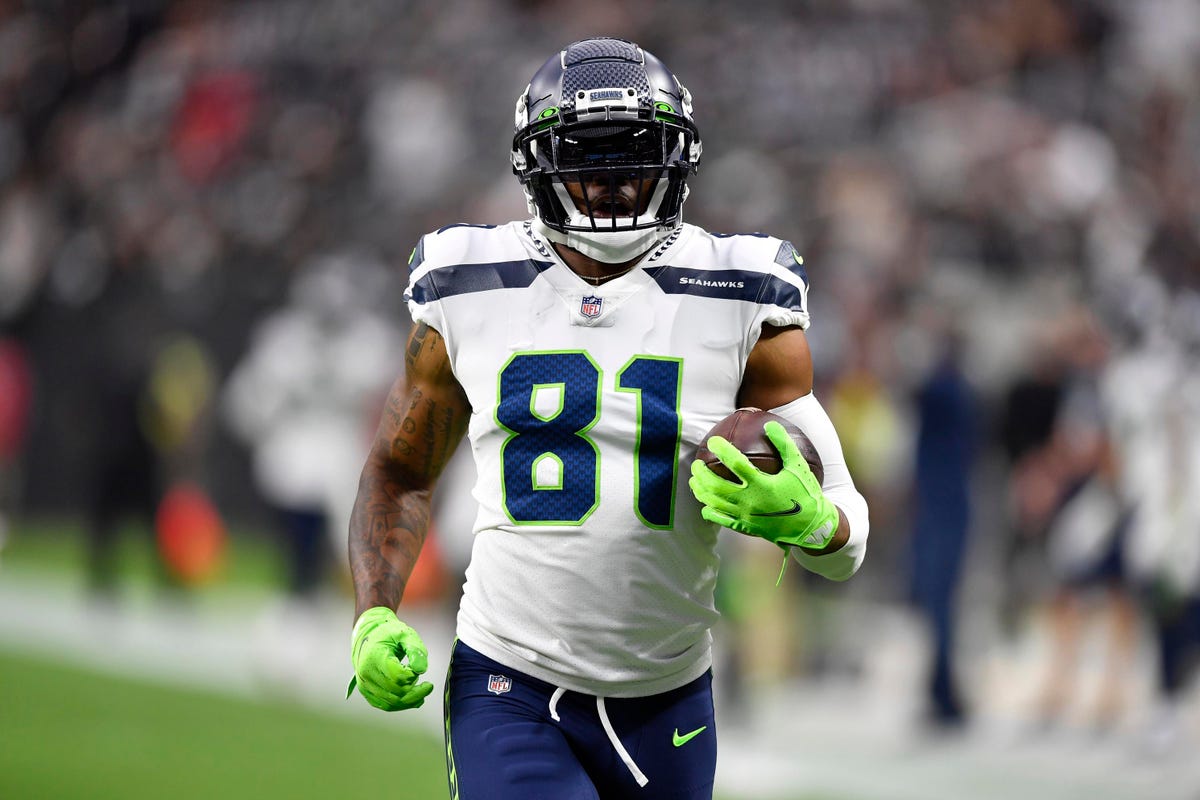 After breaking down MNF props for Saints Seahawks, we’re seeing the most value on the Seattle tight end, Gerald Everett.

On the surface, this may not look like a great game for overs. We’ve got two run-first teams, bad weather, and some very dicey quarterback play. But there are reasons to think Everett’s line just isn’t properly adjusted right now.

The game script gods were not kind to us last Monday, but this number is low enough we’ll have a shot to get there in just about any script.

We’re in the busiest part of the sports year — join us here to get full weekly slates of NFL props (plus NBA & more) delivered to your device.

The Seahawks do not have a deep stable of receiving options. Sure, everyone knows DK Metcalf and Tyler Lockett at the top of the depth chart, but are defenses worried about… Freddie Swain?

Everett missed Weeks 4 and 5 due to a positive Covid test, but came back last week and put up 40 yards in his return to action. That puts him over this number in three of his four games as a Seahawk, and 13 of his last 17 full games dating back to last year as a Ram where he was used in a complementary role.

Among players on the Seahawks with at least 10 targets, Everett is third in targets per route, and was on pace to be third on the team in targets had he not missed two games.

We haven’t seen a breakout game for Everett yet, but he’s likely the best receiving option on the team behind the stud WRs.

While the presence of Geno Smith at the helm over Russell Wilson is a huge downgrade for the offense as a whole, he may actually look Everett’s way more often. Wilson is widely regarded as one of the best deep-ball throwers in the league, often keeping a play a live and then dropping a dime far downfield to one of his stud receivers. Geno Smith? Not so much… 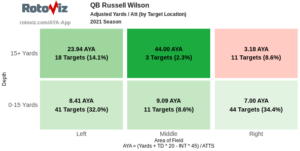 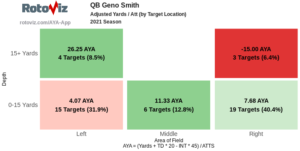 Everett’s average depth of target of just 4.3 puts him in a better position to get looks from Smith over Lockett and Metcalf, who check in at 14.6 and 12.1 respectively.

And while most of Everett’s yards last week came on a deeper target, he’s very capable of generating yards even on shorter routes. Last year Everett was tied for third among TEs in yards after the catch per reception, and this year he’s once again third in YAC/tgt at the position.

The pace metrics are not really in our favor tonight, as the Saints are one of the slowest teams in the league and have been willing to grind out wins on the ground. The Seahawks defense has offered little resistance, and this does not project to be a fast-paced game, particularly with some bad weather in the forecast.

The one positive in facing the Saints is that they may force the Seahawks to abandon the run, or at least, put them in enough 2nd and 3rd and long situations where they have no choice but to throw. Coming into tonight the Saints are allowing the lowest yards per carry of any team in the league. With Alex Collins banged up and Rashaad Penny likely fresh off IR, Seattle may be forced to air the ball out.

With teams unable to run on New Orleans, the Saints have allowed a TE to go over this line in four of their five games this year. Everett runs more routes than fellow TE Will Dissly and should be the favorite for the chance to add to that number tonight.

This is the lowest line we’ve seen for Everett in at least a year. His line of 27.5 in Week 2 is probably closer to what we should be seeing on an average week.

There are legitimate concerns tonight, with a slow pace, poor weather, and a backup Seahawks signal-caller, but that all seems to be baked into the line already. Everett made a huge catch late in the third quarter last week to get Seattle back into the game, and he should get a chance to make an impact again tonight.