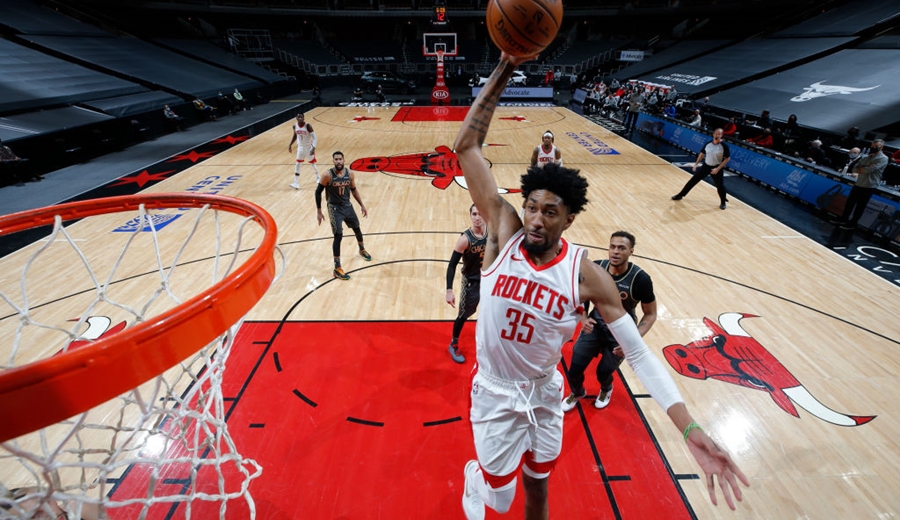 We’re back with more NBA prop action with a monster 12-game slate, and I’ve got my radar honed some Christian Wood props.

He’s been one of the lone bright spots on an otherwise dismal season for the Rockets as they adjust to life without James Harden and look to rebuild their roster. Wood is a candidate for Most Improved Player as he continues to put up very impressive numbers.

We’re on a heater after a sweaty win on this under last night, so let’s stay hot.

Wood is posting career highs in virtually every statistical category, and he’s done so without his efficiency numbers suffering much, outside of free throw percentage.

The former Runnin’ Rebel is as skilled and versatile of a scorer as any big man in the league, showing off a soft touch close to the basket and a wide array of post moves, while also knocking shots from both the mid-range and from behind the arc. Speaking of which, C-Wood is taking a career-high 3-Point field goal attempts (4.8) while simultaneously shooting a highly respectable 38.3% from behind the arc.

Wood is has eclipsed this number in three of his last five games, with the two misses coming in blowout losses in which he averaged only 27 minutes. Despite the limited minutes, Wood is averaging 33 PRA over this five-game span which is slightly better than his 31.8 PRA average on the season.

And while there is some risk of a blowout here at -9, we are getting a discount on this number of 28.5 since his line is usually set between 29.5 and 32.5. Plus, without Donovan Mitchell in the lineup, I’m willing to take my chances that they can keep it competitive.

Wood faces a Utah Jazz team that ranks fourth in Defensive Efficiency. On the surface it is a very daunting task; however, when you dig a bit deeper it becomes less intimidating. For starters, the Jazz surrender the 11th-most PRA to opposing centers (40.9 over 48 mins), also allowing the fourth-most three-point field goals to centers.

Rudy Gobert’s defensive responsibilities have him routinely protecting the paint, which provides opposing centers that can shoot plenty of open perimeter looks. Last season Wood had a 30 point, 11-rebound, 2-assist explosion versus Gobert’s Jazz in the only time these two have been matched up against each other as starters.

Despite the challenging matchup, I expect Wood to be the focal point of Houston’s offense and find plenty of success versus Utah’s scheme. I have Wood projected to finish with 32 PRA easily covering tonight’s total.