Colonial Country Club will play host to the Charles Schwab Challenge this year, and we’re looking at some of the best bets for the tournament.

The course has been a staple on tour with events held here dating back to the 1940s. It’s a Par 70 that plays just a shade over 7,200 yards. The course features relatively small bentgrass greens. The field will have to navigate their way around 85 bunkers and 4 water hazards as they make their way around the course.

We’re looking to get back on track after our article play lost last week. For all our PGA plays, join our premium Slack channel.

A matchup that popped out to me right away this week was Sungjae Im (+105) vs. Daniel Berger (-125). The books are giving them similar chances at winning and making the cut, but my model likes Im quite a bit more this week.

Daniel Berger has been inconsistent to say the least. On the season, he’s 8-for-12 in cuts made. Outside of a runner-up finish in an alternate event in Puerto Rico and a 12th place finish in January, he has only cracked the top thirty on one occasion. Berger started off well last week but shot a pair of 78s on the weekend to drop into a tie for 71st place at the PGA Championship.

Per the RotoViz Splits App, Sungjae Im has well outperformed his baseline on courses like this. Since the start of his career last season, he gains more strokes tee to green, more strokes total, and hits more greens in regulation on courses shorter than 7,300 yards. 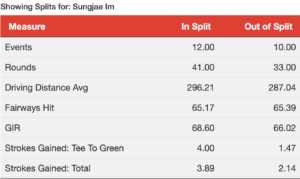 It’s true that Im missed the cut last week. But that may be why we’re getting plus odds to begin with. Comparing Bethpage Black to Colonial CC is a bit like comparing how you’d play basketball on a 7-foot rim vs a 12-foot rim. There’s a totally different game required here, so I’m not holding the missed cut at Black against him.

There’s not a lot to go off of here. Berger has played this event in the past one time and missed the cut. Im is making his debut here at Colonial CC.

Im is a newcomer on tour, so we don’t have a ton of history with matchups between him and Berger. Over the past six months, Im is 16-12-1 against him in rounds that they’ve both played the same course on the same day. For tournaments, he’s 5-5-1 in that time frame.

With the boost that Im sees on short courses, I’m taking the plus odds here and would bet Im down to -110.