Coming off an exciting US Open tournament, we’re back this week with more best bets for the Travelers Championship.

This week, the field is facing a much different task at TPC River Highlands. The course is a par 70 that plays about 6,800 yards. The scores should be low, and my model likes a matchup between two guys that aren’t exactly household names.

Cameron Tringale (-135) and Brendan Steele (+105) are facing off this week and the model doesn’t have it as a particularly fair fight. And we’ve also got three bonus H2H picks for you this week as well.

We’re red hot with PGA article cards after Kevin Na (+7) took down Bubba Watson (+8) when they both missed the cut at Pebble Beach, making it two in a row after a win at the Canadian Open, too.

Tringale has put his game back together a bit this season. He’s made 8-of-11 cuts including four Top 25s. He’s trending in the right direction, as three of those results have come in his last four starts. He also has eight -straight rounds in the 60s coming into another low scoring affair.

The image below shows his splits over the last four starts, courtesy of the RotoViz Golf Splits app. 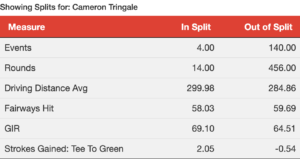 Steele has had a rough go of it lately. He’s only made 5-of-12 cuts on the season. His ball-striking has been off lately, hitting fewer than 60% of his greens in regulation in three of his past five events.

Steele has only had eight rounds in the 60s all season. His splits for the last five events are shown below. If you have young children in the room, please ask them to leave before looking at his splits. 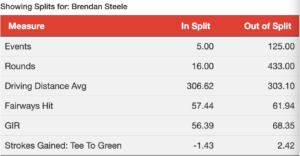 Tringale hasn’t had many good results here, but he’s only played this event once since 2014. I’m not too worried about it considering that this is the best golf we’ve seen from him in quite some time. Steele has had success here in the past making 5-of-7 cuts including four Top 20s.

Over the course of the past five years or so, Steele holds the edge  64-51-4 in tournaments that they’ve both played. As we filter down to more recent history it swings hard the other way, though. Over the past year, Tringale is 7-2 against Steele which would make him a -350 favorite.

Golfers that are in between -0.5 and 0 have outperformed golfers in the 1 to 1.5 group by a stroke per round looking back at results since 1990. The average golfer that scores in Tringale’s group will beat the average golfer in Steele’s group at a 60-40 split.

To get all our H2Hs, sign up for our premium Slack chat.