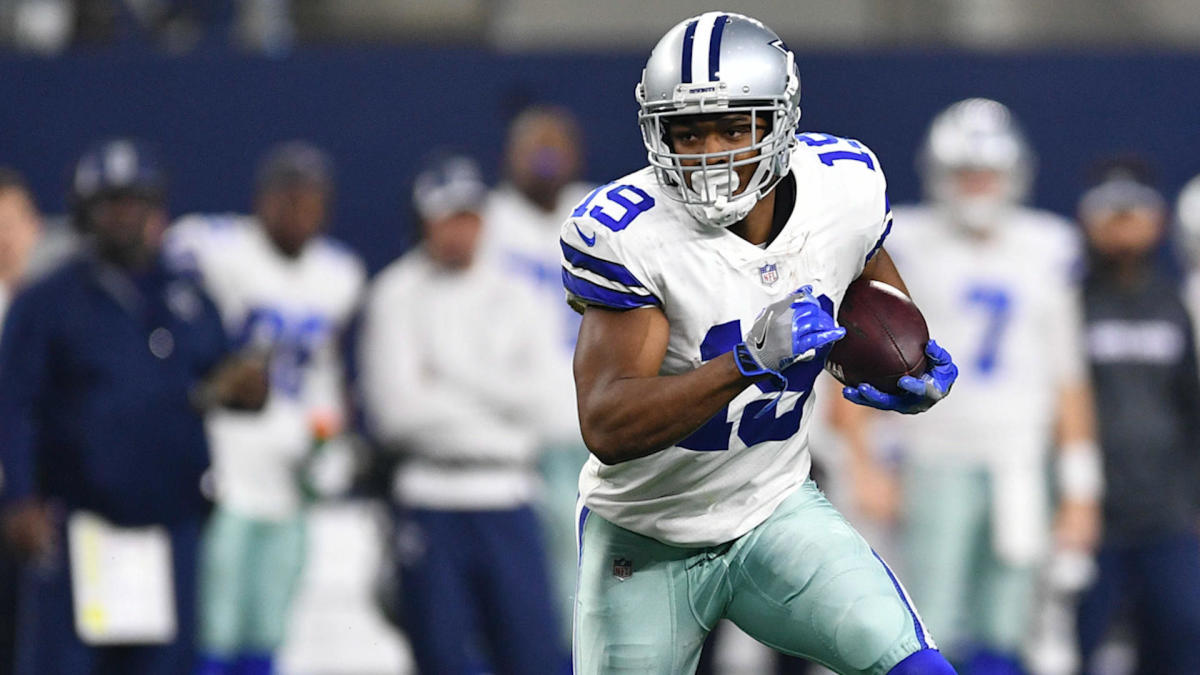 Coming off a Thanksgiving gut-punch against the Bills, Dallas travels to Chicago as 3-point favorites, and we're breaking down a couple of our best Cowboys Bears props for Thursday Night Football

The Windy City probably won't live up to its name, but the cold, wet weather could play a small factor. At the very least, such conditions won't hurt our first prop play on Amari Cooper, and we'll also break down Tarik Cohen's matchup against the Cowboys zone-heavy defensive looks.

We're coming off wins on Sunday Night and Monday Night to top off what was one of our biggest betting weeks of the year.

Between offshores and domestics (gotta love those fantasy props), we went 25-9, +15.05 Units

Now up over 75 units between the 2 streams YTD!

We also just slashed prices on rest of season (with playoffs) subs for all pkgs here --https://t.co/Q3EQbAZEYv pic.twitter.com/eolZF68z61

Join here and get signed up for the stretch run and playoffs at our discounted, lowest prices of the year.

One of our favorite tools for building arguments in these pieces is the RotoViz Splits App. It allows you to look at how a player's output is affected by a dozen different variables -- things like home/away splits, point spread splits, and vs opponent splits.

It's a fun tool, but it's easy to overreact to the small sample sizes that are often involved. When it comes to Cooper, however, there's a growing body of evidence that there might actually be some serious signal to his wildly polarized home/away splits.

It's been a theme throughout his career, and this year it's more dramatic than ever. 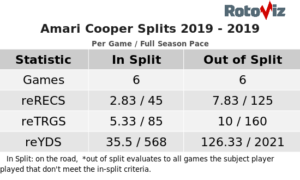 It would be one thing if he was commanding similar volume in away games, but his targets are cut nearly in half.

Granted, it's not as bad as it looks since Cooper's missed chunks of time in some of those road games with his growing list of leg injuries.

But this has been a thing for him going back over a larger sample size. Throughout his career, Cooper has put up 49% more receiving yards at home than he has away. 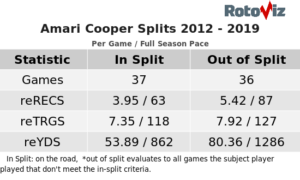 Even if you believe that these numbers don't mean much in a winnable matchup versus an overrated Bears secondary, which is fine, this number is objectively a shaded a little too high and will start to move in our favor.