We’re back with more MNF Props trends, as the Browns host the Bengals as 3-point underdogs in a game with a healthy 45-point total.

There are several strong trends we’ve identified for tonight’s game — this doesn’t mean they’re all winners, but they’re all worthy of further investigation.

Shop MNF Props ’till you drop with our Prop Odds Comparison Tool. 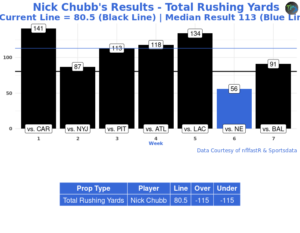 Nick Chubb has been comfortably blasting past his rushing line all year long, hitting this mark of 80.5 rushing yards in 6-of-7 games with a median result of 113 yards. 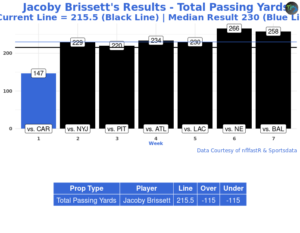 Despite leading a run-first team, Jacoby Brissette has somewhat surprisingly hit the over on his Passing Yards line in six-straight games since falling short in Week 1.

Tonight will be a tough test, though. The Bengals defense is holding opposing QBs to the fourth-lowest Yards per Attempt (6.25), while also holding them under their closing Pass Yards prop line 71% of the time. 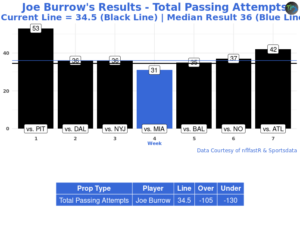 Joe Burrow’s Passing Attempts line for tonight is set at 36.5, a number that he’s eclipsed in 6-of-7 games with a median result of 36.

Of course, those all came with All Pro WR Ja’Marr Chase in the lineup. He’s out tonight (though he’ll avoid the IR) so it will be fascinating to see how Cincinnatti changes up their offensive gameplan without their best playmaker. 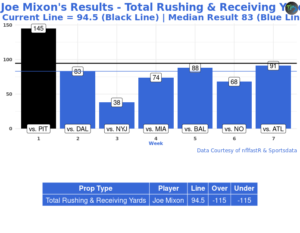 On the other side of that equation, we have Joe Mixon, who’s gone under his Rushing + Receiving Yards line of 94.5 in six-straight games and 6-of-7 on the year.

However, he’s likely to be handed a heavier workload tonight with Chase out of the lineup. 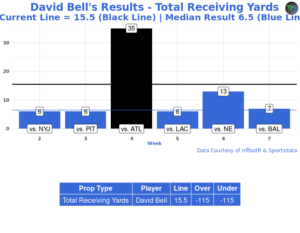 It’s somewhat surprising to see a line of 15.5 yards for Browns WR David Bell. He’s hit that number just once this season and has a median result of 6.5 yards.