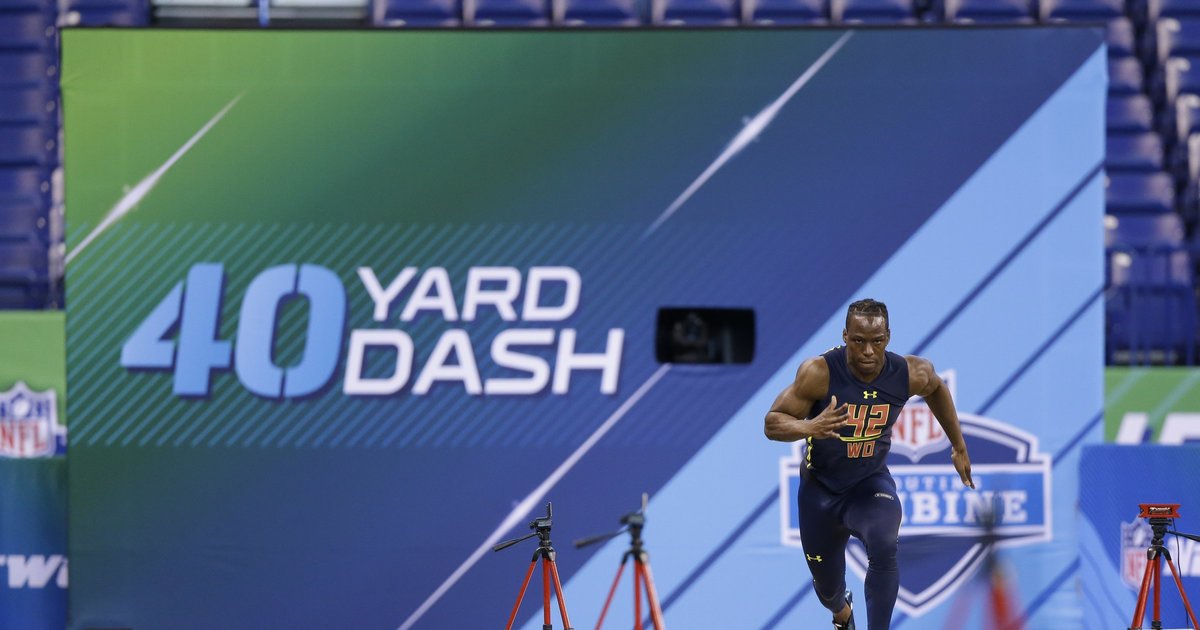 The first big event of the NFL offseason is days away, and we’re starting to see some NFL Combine props trickle in.

There are no player-specific lines to attack just yet, but we’ll be keeping an eye on those and publish some of our best bets as they’re released.

What Will be the Fastest 40 Yard Dash Time?

-300 is not enough to pass on, not when the book is essentially asking us whether or not the all-time record of 4.22 will fall in Indy.

History suggests such an outcome is less likely than the 25 percent probability implied by this -300/1.33 line.

Here is the fastest 40-yard dash time at every NFL Combine over the past 15 years.

Titans star Chris Johnson established the modern day gold standard when he flashed a 4.24 time in 2008 — an impressive feat at 197 pounds.

That record stood for a full eight years, with no one posing any real threat, until Bengals’ blazer John Ross finally upended Johnson with a 4.22 time at the 2017 combine, making DJ Chark’s 4.34 time last year look relatively pedestrian.

Before Ross, Dri Archer came the closest at 4.26 seconds, a considerable gap to 4.22 when dealing with these minuscule margins.

Not only is a 4.21 a long shot, but even having someone break the 4.30 mark could be considered a coin flip at best.

Is there anyone in the 2019 NFL Draft class capable of taking the speed throne away from Ross next week?

That seems unlikely considering the cast of contenders.

The Ohio State defensive back may be the fastest man in college football. A track and field star in addition to his exploits on the football field, Sheffield’s 6.663 60-yard dash is a school record.

No pro day times are available for Sheffield, but his coaches say he’s at least as fast as former team mate Denzel Ward, who ran a 4.32 40 at last year’s Combine.

One player who takes exception to Sheffield’s tag as the fastest man in the draft? Fellow Buckeye Parris Campbell.

Hold on… who came up with this?? Y’all better stop playing man.. ? https://t.co/wpuPio0zAP

Walter Football is projecting the Ohio State WR at 4.35 seconds.

At 205 pounds, that would be a great time, but one report suggests that Campbell can go faster; he apparently ran a 4.26 hand-timed 40 at a Buckeyes practice.

Pound for pound, Parris may well be the best speed/size combination in the draft. And while that may be a positive for his NFL prospects, his size is working against him here.

The Georgia WR told 24/7 Sports that he has designs on being “around” Ross’ time.

“I know John Ross ran a 4.22. That is in sight for sure. You don’t want to focus on that because it can mess you up. But your goal is definitely to be around that time for sure.”

That may be a stretch for the 183-pound prospect, however.

University of Massachusetts’s Andy Isabella claims to have clocked a hand-timed 4.26 40-yard dash. The results for hand-timed sprints are unreliable at best, especially ones at unsanctioned training sessions.

But even you if choose to believe the claims of the 190-pound WR, that still puts him behind the elite speed of John Ross.

The 4.21 threshold has never been achieved, and that’s what needs to happen in order for us to lose this Combine prop bet — even if someone ties Ross’ 4.22, we still win.

There is nothing from this class that suggests an historical time is in the pipeline, and these -300 odds seem way off.