NFL playoffs and Wildcard Weekend props are a different beast — the liquidity pouring into these markets increases dramatically and lines will be the sharpest they’ve been all season.

We’ve poured through all the openings so far, and this is one of the few that lines popped off the page as an obvious value. Let’s get to it.

We’re looking to build on a regular season that saw win at a 61.3% rate with a 15.8% ROI — join us here to get full NFL playoffs slates – plus NBA props & more – alerted to your device.

It’s a low number, but are a multitude of factors working against Washington’s third-string RB:

The first two points are clearly closely connected. When Gibson is active, we simply don’t see McKissic used much in the run game. 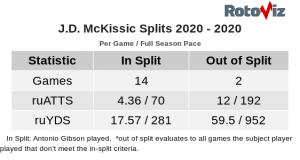 McKissic is averaging 17.8 yards on 4.4 carries in 14 games with Gibson active this year — viz courtesy of the RotoViz Splits App.

More of a pass-catching specialist, McKissic has gone under our line of 21.5 rushing yards in 10 of 14 of those games.

Even if McKissic gets five or six carries for some reason, the Bucs matchup is as bad as it gets on the ground for opposing backs.

Of the 47 RBs to get at least one carry against Tampa Bay this year, just six of them managed to crack even 40 yards on the ground.

However, with an 8-point spread suggesting the Bucs run away with this one, it’s possible we don’t see more than 2 or 3 carries for McKisssc.

Given that Tampa allows the most RB receptions in the league, I would expect him to be much more involved in that phase of the game.

Numbers this low always come with plenty of variance, but it’s pretty clear that this line is baking in his recent averages, and those include two games without Gibson in which McKissic tallied 11 for 68 and 13 for 51 yards.

The number fails to account for the context of this game and should probably be set closer to 17.