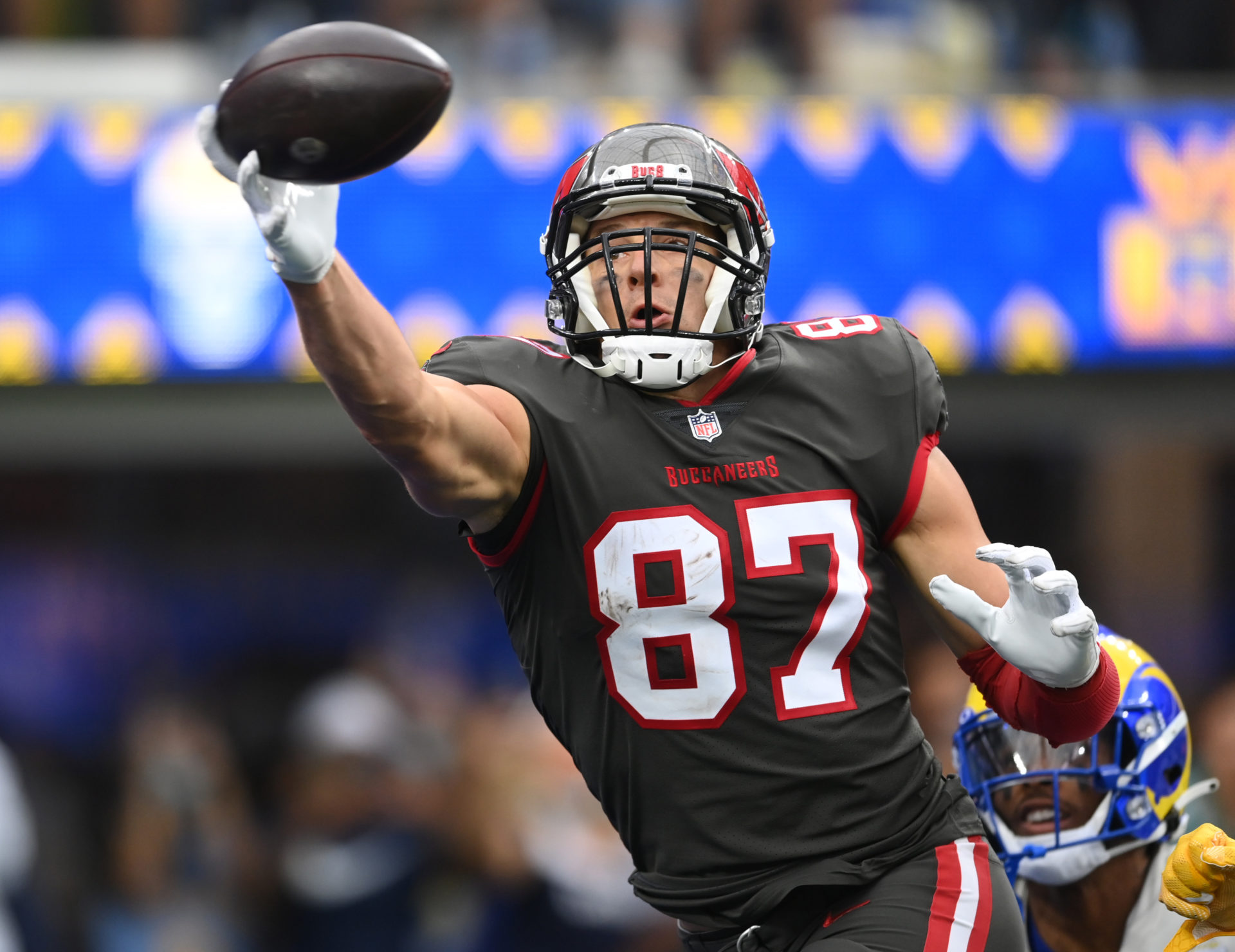 An exciting Week 15 NFL slate lies ahead, and we’ve found some compelling angles on two NFL Props for Week 15.

This week’s installment of Thursday Night Football was one for the ages, and with NFL games on each of the next three days, there are plenty of opportunities to find some winners.

My Bet The Prop article plays are 17-11 so far this NFL season — let’s build off of this 61% hit rate to wind down the season.

For this week’s main slate, we’re taking a look at two timeless tight ends who are still getting the job done. Let’s dive into the plays!

Rob Gronkowski and Tom Brady form one of the greatest quarterback-receiver duos in league history. They were unstoppable in New England, and they’ve been outstanding in Tampa Bay this season. Brady is a heavy favorite to win the NFL’s MVP award at age 44, and Gronk remains an elite tight end 11 years after the Patriots selected him in the 2010 NFL Draft. Not much has really changed for these two.

At 52.5, this is the highest Gronk’s receiving line has been in 2021. However, it’s still too low. He’s seeing some magnificent volume and is on the field almost all the time, evident in his game log:

The four-time Super Bowl champ has finished with at least eight targets and 55 receiving yards in every game but one. Furthermore, Gronk’s 88% snap share last Sunday tied his season-high mark from all the way back in Week 1. He is seeing all the work he can handle and hardly leaves the field.

The former Patriot has hit this over in six of seven games, averaging a wildly impressive 71.1 yards per game. His 8 targets per game also put him in elite company and confirm he is always a preferred option in this offense. Gronkowski joins Travis Kelce, George Kittle, and Mark Andrews as the only four tight ends to average at least 7.0 targets and 70 YPG this season, cementing his status as a top-tier option at the position.

The Saints are unlikely to stop Gronk from making his mark on Sunday Night Football in Week 15. Opponents have target TE’s 6.9 times per game against New Orleans this season, which hovers right around the league average. The Saints have also allowed eight of the 12 starting TEs they’ve faced to reach their 2021 YPG average.

New Orleans possesses the best rushing defense in the NFL, which forces opponents into passing situations more often. Gronkowski and the Tampa receivers should have some extra routes and targets available throughout the night thanks to this excellent run defense.

The Saints haven’t gotten any better at defending the middle of the field recently, either. New Orleans gave up 62 yards to each of Kyle Pitts and Dallas Goedert within the last few weeks, leaving the door open for Gronk to do plenty of damage in a primetime showdown.

Ryan Griffin may not be the high-profile name that Rob Gronkowski is, and he also isn’t an elite player like Gronk. But recently, he has been quietly getting the job done for the New York Jets. Griffin’s yardage line has been set below 20 yards every week this season. That’s insane considering he’s smashed his total time and time again lately.

Griffin has at least 20 receiving yards in 5 of his last 6 outings. He’s seeing 3.7 targets per game and averaging 25.2 YPG during this stretch. And, the ninth-year tight end’s only game without at least 20 yards over his last six was just shy at 15. His consistency has been impressive in what has otherwise been a depressing Jets offense.

The 31-year-old pass-catcher has clearly established himself as New York’s top tight end over the last couple of months. During Griffin’s six-game over hot stretch, he has seen a slight increase in playing time. Griffin has played 65% of the Jets’ offensive snaps in 2021 and there hasn’t been a teammate at his position stealing considerable playing time from him in quite some time.

The opportunity for Griffin to produce in a good matchup is there for the taking.

Ryan Griffin roasted this same Dolphins defense for 39 yards on three receptions just three games ago. This has been the norm for Miami’s weak TE defense in 2021. The Dolphins, fresh off of a bye week, even allowed 61 yards to Evan Engram just before their bye.

Miami is conceding 59.2 receiving yards per game to opposing tight ends this season, good for ninth-most in the NFL. The position is one of the team’s biggest defensive weaknesses and Griffin should be able to exploit it.

With New York’s top two pass catchers, Elijah Moore and Corey Davis, sidelined for this matchup, Griffin should sneak in another handful of targets this week. In a good matchup, Griffin essentially only needs to catch a pair of passes to cash this one for us.

Rob Gronkowski remains at the top of the tight end landscape across the NFL, even in his 11th season. Despite retiring from football and then returning again, Gronk’s rapport with Tom Brady hasn’t gone anywhere. He’s in another prime position to produce on Sunday night against the Saints.

Meanwhile, Ryan Griffin is subtly having one of the better seasons of his career at age 31. The 20-yard mark has been a breeze for him to reach in recent weeks, and he’ll look to continue that trend on the road in Miami.

Enjoy playing these NFL props for Week 15, and join us for the final weeks of the NFL season!