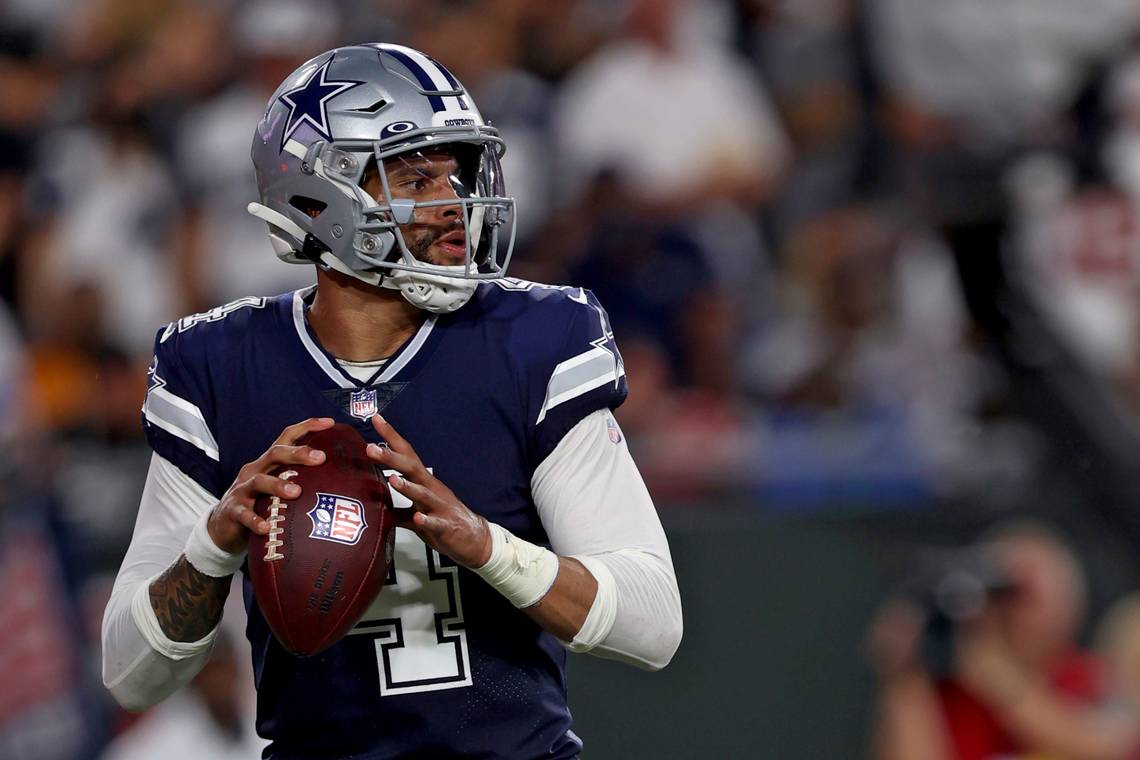 We’ve got Thanksgiving Day NFL props, cooking up a tasty play on Dak Prescott for the Cowboys Raiders matchup.

Dak is likely to be without his two best downfield weapons, and we don’t think his passing line has been properly adjusted. Let’s jump in.

We’re coming off an easy win on MNF, so let’s keep it going to kick off Week 12. Join us here to get our full slates of NFL props alerted to your device, plus NBA, NHL, EPL, PGA, and more.

Covid will keep Amari Cooper out for another game, while CeeDee Lamb is unlikely to clear the concussion protocol in time to suit up on a short week. That leaves Prescott decidedly short on downfield weapons, making this passing prop number slightly optimistic.

**Update: It sounds like Lamb now has a chance to be cleared in time for this game, although we can’t remember hearing of any player ever being cleared from concussion protocol after four days, so we’ll see. Either way, we think this number is still slightly too high.

After Lamb left last week’s game, Prescott turned in one of the least efficient outings of his career, becoming a check-down demon and turning 42 attempts into just 216 yards. That 5.1 yards-per-attempt average was his worst since the 2018 season. Keep in mind, that was against the Chiefs, who are a bottom-10 pass defense. This week, he’s in a tougher matchup against a Raiders team that has allowed the fifth-fewest passing yards in the league.

The fact that Dak is coming off a calf injury which was significant enough to keep him out for several weeks probably isn’t helping either.

He’s averaging just 6.57 YPA in three games since, well off his normal efficiency. 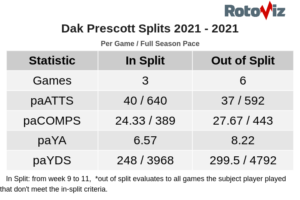 Without their best playmakers, the Cowboys know they need to get the run game going against the Raiders to have a chance, with Ezekiel Elliott going as far as to say they’ll make it a point to get going on the ground.

“I think running the football has to be important to us,” Elliott told the Dallas News. “I think it helps this offense. We’re a better football team when we can run it well. “I think it will be a point for us Thursday to get that run game going.”

The Cowboys will also get a big boost to the ground game with the expected return of All-Pro offensive tackle Tyron Smith. If they needed another reason to go run-heavy in this spot, Smith’s return provides them even more motivation.

The Raiders present a run-funnel defense which should prompt the Cowboys to do plenty of what they say want to do anyway:

Only the Bills defense has a better YPA allowed than Vegas, which has helped them hold seven of the 10 QBs they’ve faced under this number.

With the Cowboys’ best passing weapons on the shelf, everything points to a run-heavy gameplan on a short week. Look for a heavy dose of the run game, and when Prescott does pass, expect plenty of the same dump-offs we say last week.