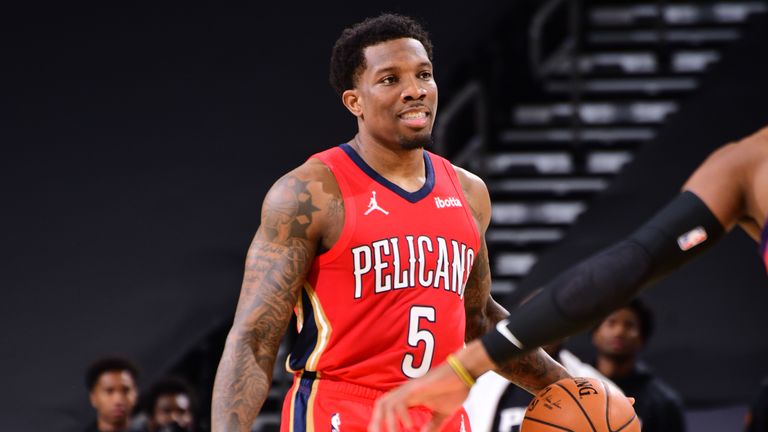 Per our NBA props database, if you had bet every Eric Bledsoe prop for PRA this season, you’d be winning at 65.7% rate. But wait, there’s more!

We’ll run down a few reasons we like Bledsoe tonight, not the least of which is the swirling trade rumors that have led to a limited role. We missed on our article play last night, but overall we’re 136-91 (60%) on NBA props this year.

We also just launched our MLB Early Bird Sale (20% off with code MLB20), and with March Madness here (yes, we have player props for that too!), and NBA in full swing, there’s never been a better time to join us.

The Bledsoe trade rumors have been flying for weeks, although interest has so far been faint.

Instead of showcasing their $70-million dollar man in a bid to run up his asking price, the Pelicans have instead cut into his playing time and usage.

Over the last two weeks, Beldsoe’s minutes have plummeted by 19.3%, and when he is on the court, he’s also less involved — his usage has cratered by 21.9% in that stretch.

Playing less and doing less is a bad combination.

In this case, it equates to a pretty sad 12.4 PRA average over his last five games, a 35% drop in productivity. He hasn’t hit this number in any of those games, although he made it a sweat against the Trail Blazers with 17 PRA in his last game.

Portland isn’t exactly a plus matchup for our purposes, but there’s no reason to expect a minutes bump here for Bledsoe, especially after he committed a key foul late on Damian Lillard which ultimately cost the Pelicans the game.

Maybe that doesn’t put him further in the dog house, but it probably won’t help.

Meanwhile, there are still some redeeming qualities to this Portland matchup:

This is less about the matchup and more about a prop line that doesn’t reflect his heavily reduced role.

Look for 20-25 minutes from Bledsoe tonight, which puts us in a good position to cash this under.