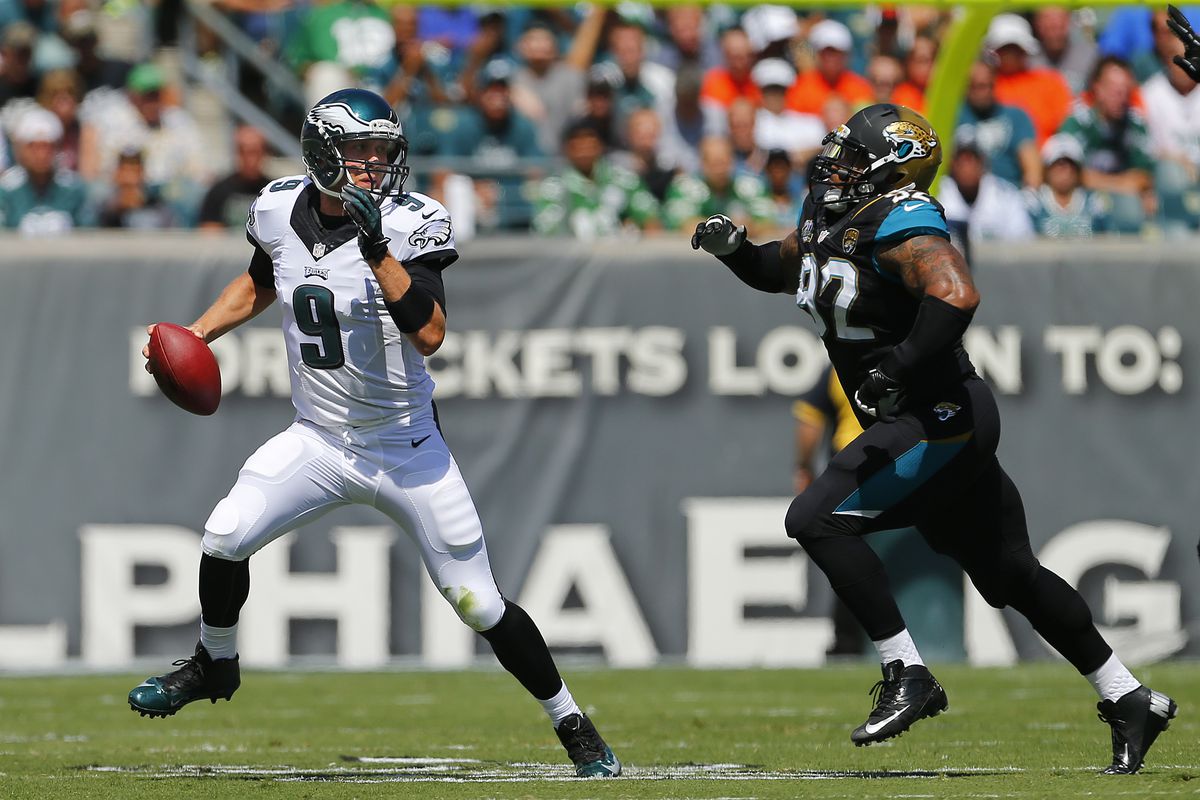 The NFL free agent frenzy is fully underway, and the season-long prop betting lines have been quick to follow, giving us a chance to get some early action — next up, Nick Foles‘ passing prop as a Jacksonville Jaguar.

Earlier in the season, we told you that Foles was as good as gone from Philly, and he went ahead and parlayed his heroics there into a four-year, $102-million ($50M guaranteed) contract with the Jaguars — an impressive feat, considering there appeared to be few other teams bidding for his services.

We’re seeing prop betting lines for Foles’ 2019 season when it comes to yards, TDs, and interceptions, and in this piece we’ll focus on on the least-fluky stat of the bunch — passing yards.

Be sure to check out our look at the betting lines for Antonio Brown’s first season as a Raider as well.

The book has set his passing number at a very modest 3,500.5 passing yards with -115 juice on both sides.

Before we dig into what kind of passing volume we can expect to see from the Jaguars in 2019, let’s take a historical look at Foles’ career.

The two exceptions are notable, however. His poor 2015 came under the much-maligned Jeff Fisher, who can weigh down a QB’s stats like few other coaches. For reference, Jared Goff’s yards/attempt went from 5.3 under Fisher to 8.0 under a new coaching regime, a 51% increase in efficiency.

His projection also fell short in 2017, although that came in a tiny sample of just two starts. In that year’s playoffs, he averaged 324 passing yards per game.

Even including those duds, Foles has an average projection of 3,924 passing yards over a full 16-game season in his career.

I know what you’re thinking — the Jaguars offense is as rush-heavy as they come and will lean on Leonard Fournette and the defense once again in 2019.

Fair enough, but even if that’s the case, they haven’t been as passing-averse as you may think.

Deposed Jaguars starter Blake Bortles has gone over the the 3,500-yard mark in three of his last four seasons, averaging 3,684 yards in that stretch, a number that’s heavily weighed down by 2,718 yards in 13 games last year. If Bortles can consistently hit 3,500 yards, why can’t Foles?

Let’s do some quick napkin math.  We’ll go ahead an assume the Jaguars have something between the 32.2 and 33.5 pass attempts per game they posted over the last two seasons. Considering they just handed their QB $50M guaranteed, I actually think that number could easily be higher, but let’s go conservative and call it 32.8 attempts per game.

The big risk here is an injury which keeps him from starting 16 games, and that’s always why these season-long props seem to be set on the low side. But if Foles does play 16, I think he’s much better than a coin flip to clear 3,500.5 yards.

At $22M per year, he’s now making more than Ben Roethliberger, Tom Brady, and Philip Rivers. Foles is now their highest-paid player, and I don’t think the Jaguars made that move just to turn around and hand the ball off another 420-250 times.

I believe Foles will carry a reasonable load this season, and we’ve seen that he’s efficient enough to convert.