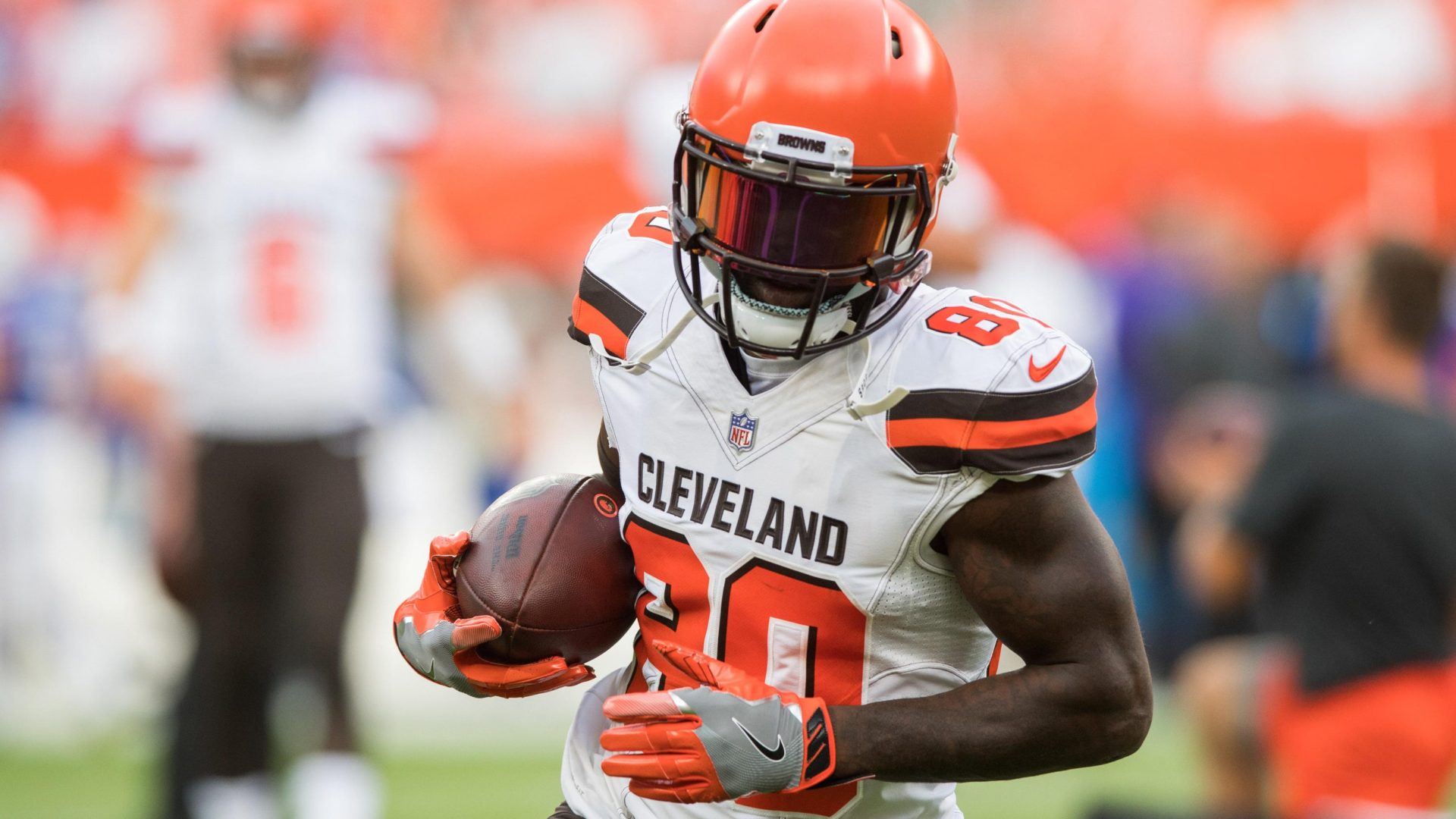 Wide Receivers are some of my favorite prop bets to target, and we’ve got three juicy value plays lined up for you as we finally get Week 1 of the NFL season underway.

We got off to a decent start in the season opener, as we cashed the under on Taylor Gabriel and went 3-0 on our subscriber leans in a game we didn’t actually like very much.

You can also check out our two favorite RB props bets for Week 1 here, and for something a little different, our favorite fantasy prop bet.

Let’s jump in on our three favorite early plays at WR with a look at Jarvis Landry, Tyler Lockett, and Mike Williams – and don’t forget to join us if you want to get our full slate of +EV prop bets in 2019.

This has moved to -149 as of Sunday morning. It’s no longer a play at that price, but we’ll be keeping an eye out for any new lines this morning.

The usually safe floor fell out from under Landry after much-maligned head coach Hue Jackson left the building in Week 8 of year.

With Jackson calling the shots, Landry averaged 11.6 targets and 6.1 receptions, but those numbers were slashed 41% and 35% respectively under new playcaller and now head coach Freddie Kitchens. 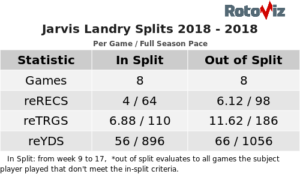 In the season’s second half, Landry had 5 or fewer receptions in six of eight games.

Part of that was the severe drop in play pace, as the Browns ran about 18% fewer total plays under Kitchens, but they also moved to a more run-heavy attack, slashing their pass attempts by five per game.

But it wasn’t just the drop in overall team volume that hurt Landry. He also appeared to be phased out of the offense, going from a 30% share of team targets under Jackson to just 22% with Kitchens calling plays.

Oh, and the Browns also added this guy Odell Beckham. He is an above-average WR who’s commanded 10.5 targets per game over the course of his career. Beckham is going to get fed, and he’s also got the juicer CB matchup tomorrow, as Landry will be in tough versus Logan Ryan.

This number opened and stayed around the mid-70-yard level at most domestic books, and it’s currently sitting at 76.5 yards at MyBookie. You should have plenty of middling opportunities by leveraging this bloated BetOnline number of 83.5.

Playing the under outright is +EV as well. The highest projection I’m seeing for Lockett from several sources is 4.4 receptions for 66.9 yards. The Seahawks No. 1 only hit this number in three of 16 games last year.

This a cakewalk matchup for Lockett to be sure — the Bengals were brutal against slot WRs last year and will open the season without CB Darqueze Dennard, further brightening Lockett’s outlook.

His target volume will climb this year with Doug Baldwin retired, but bookmakers seem to be overreacting here with this number. The biggest receiving prop line we’ve seen from Lockett over the past two years was 64.5 yards in Week 6 versus the Raiders last year — he finished with 13 yards.

The other concern here is the -9.5 spread and the possibility of a fast Seahawks start motivating to them do what they love most — run the ball all night long. While the splits aren’t dramatic, we see a clear tendency towards rushing volume in games where they’re favored by 9.5 or more. 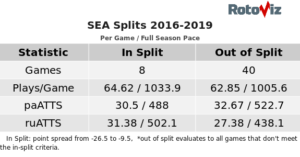 I expect this BetOnline number to head south, but I’d still play the under on anything bigger than 80 yards.

Williams will inherit a bigger slice of the target pie with the departure of Tyrell Williams to Oakland, but perhaps not in this matchup.

The Colts allowed the fewest receptions and the second-fewest yards to opposing WRs last year, and that was with Andrew Luck pushing the pace. Colts’ opponents ran 63.5 points per game last year, 13th-most in the league, and I expect that ranking to fall with Jacoby Brissett under center and a more conservative gameplan in place that will see the Colts relying on their underrated defense and running more behind an elite offensive line.

Regardless of pace, Indy is built to stop the big downfield play – Williams’ specialty – and I expect a ton of targets underneath to Keenan Allen, Hunter Henry, and Austin Ekeler.

I’m not happy about paying the -130 juice here, and I wouldn’t pay any more to lock this prop in.