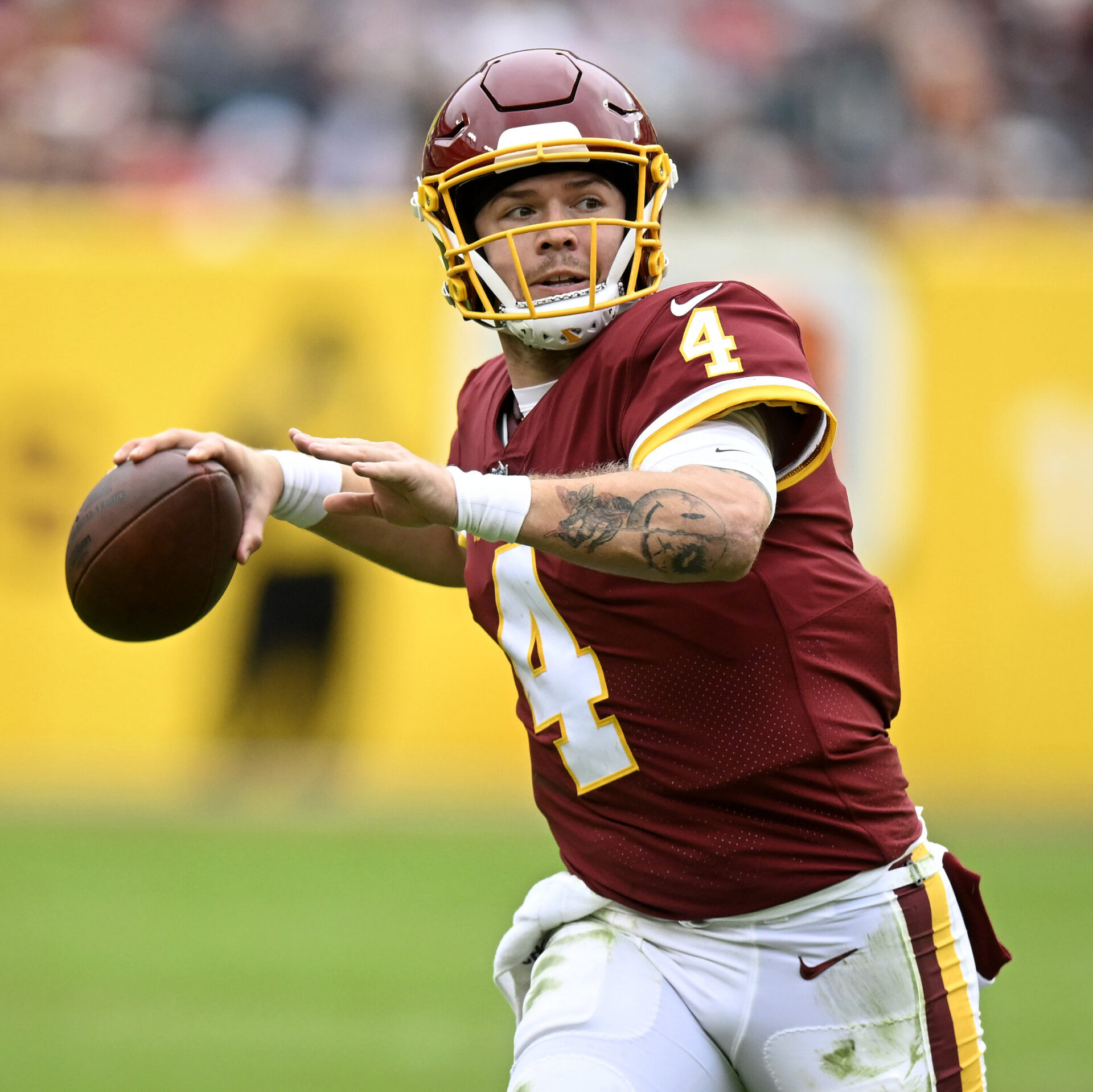 The 2022 NFL regular season has been a wild one so far. And, as the playoffs approach, the season may get even weirder. We’ll be diving into our favorite NFL Props for Week 13 in a matchup that could dictate the NFC playoff picture.

The New York Giants are hosting the Washington Commanders — kickoff is at 1:00 ET. The Giants are trending in the wrong direction, while the Commanders have won six of their last seven games. This is each team’s biggest game of the season thus far, as the winner will be in the driver’s seat before these teams square off again just two weeks from now.

New York’s rushing defense has been vulnerable this season. Meanwhile, Washington has become one of the NFL’s most run-oriented offenses over the last month. With Taylor Heinicke and the Commanders entering as 2-point favorites, this is an excellent opportunity for their run-heavy play-calling to continue.

In six starts this season, Taylor Heinicke has led the Washington Commanders to a 5-1 record. In these games, the team is running on 56.5% of their offensive plays. That marks a massive increase from Washington’s 38.1% run rate before Heinicke took over.

Since Week 6, Washington’s defense is giving up just 16.8 points per game. Only the Jets, Titans, and 49ers have held opponents to fewer points per game during this stretch. Offensive coordinator Scott Turner has taken advantage of this stellar defensive output by limiting Heinicke’s volume and embracing the team’s rushing attack.

The Commanders’ 37.0 rushing attempts per game with Heinicke at QB are the league’s second-most during that stretch, trailing only the Chicago Bears. Against a Giants’ defense that is better against the pass than against the run, expect a heavy dosage of Brian Robinson and company out of the backfield.

By Expected Points contributed, the Giants have the NFL’s 19th-ranked pass defense and 25th-ranked run defense through 12 weeks. And, opposing offenses have attacked them accordingly since their Week 9 Bye.

In New York’s last three games, their opponents are averaging 31.7 rush attempts and only 31.0 pass attempts per game.

Jared Goff threw only 26 passes, compared to his 33.8 attempts per game in Detroit’s other ten games. And, although Dak Prescott and Davis Mills were closer to their season averages in the attempts department, they also posted a negative Pass Rate Over Expected against New York.

PROE measures how often teams throw compared to their expected pass rate, adjusted for game situations. And, lately, Washington has been leaning on their run game no matter what.

38 quarterbacks have thrown at least 100 passes this NFL season. Heinicke ranks 36th in PROE, as Washington passes 9.2% less than expected when the Old Dominion product starts.

Only Justin Fields and Marcus Mariota have thrown less than Heinicke in 2022. Mariota and Fields’ passing attempt props have been easy fades this season, so it’s only right that Heinicke joins the club headed into Week 13.

The New York Giants utilize a ton of man coverage on the defensive side of the ball. This is perfect for Washington’s offense, which has relied on pre-snap motion and rush-oriented play calling lately.

This is a must-win game for the Commanders, and the only way they can win is if they keep Taylor Heinicke out of harm’s way. He’s thrown fewer than 30 passes in four straight weeks, and the Commanders should try to extend that streak to five on Sunday.

Enjoy playing our NFL Props for Week 13 and Join us for the rest of the NFL season!