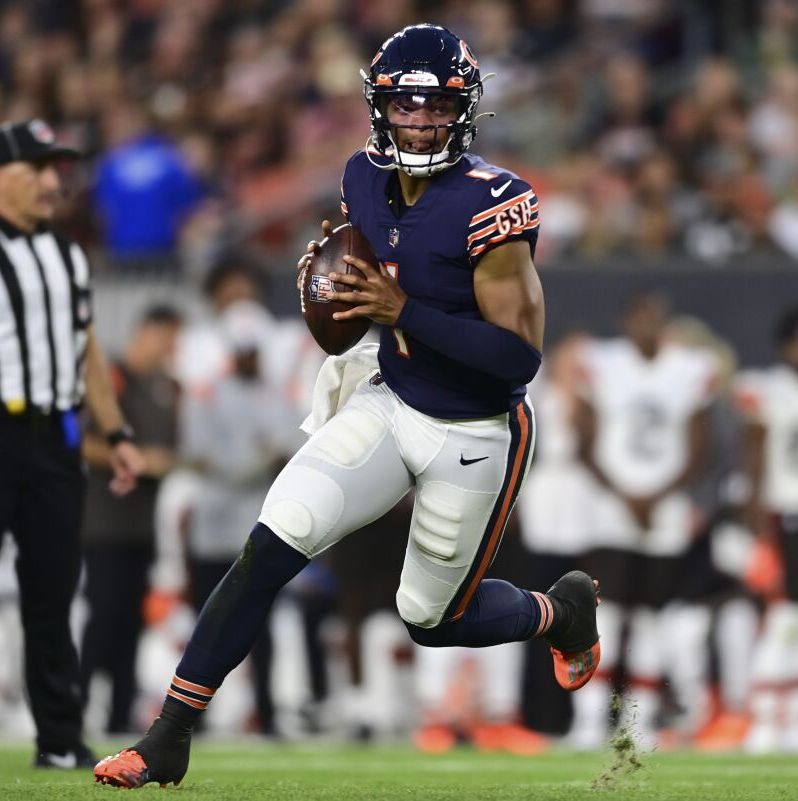 It’s almost Thanksgiving week! But first, we still have a jam-packed NFL slate on tap this Sunday. So, we’re bringing you our favorite NFL Props for Week 11.

The Chicago Bears are visiting the Atlanta Falcons this Sunday — kickoff is at 1:00 ET. Both teams are entering this contest with losing records, but in a weak division, the Falcons are still somehow hanging onto their playoff hopes. Against a prolific Chicago rushing attack led by quarterback Justin Fields, their defense may struggle to get stops.

Atlanta’s defense is uniquely horrific against both the pass and the run. This should lead to a surprisingly fun Bears offense being able to get whatever they want this Sunday, which means, in all likelihood, Fields won’t exactly air it out in Atlanta.

The evolution of Justin Fields and the Chicago Bears offense in 2022 has been fascinating. After failing to even complete 10 passes in the team’s first three weeks, the team ramped up his passing volume a bit. But, the real revelation has come through the quarterback’s legs.

Fields is now up to seventh on the 2022 NFL rushing leaderboard. And, over the last five games, only Derrick Henry, has been more productive on the ground.

Bears offensive coordinator Luke Getsy has finally realized that his QB shouldn’t be deployed as a traditional passer. The Ohio State product, who stands at 6-foot-3, 228 pounds, and runs a 4.4-second 40-yard dash, has more rushing yards than passing yards over his last two games.

Look for Fields and the Bears to try and dominate this game on the ground, not through the air.

The Falcons’ run defense was abused by the Carolina Panthers in their last game. Carolina threw just 16 passes last Thursday night, while they ran 47 times for 232 yards. That stat line almost looks fake.

And, if there’s a team that wants to run the ball on more than 70% of their offensive plays, we’ve found them.

Fields and the Bears have posted a Pass Rate Over Expected of -15.38%. This is by far the lowest mark in football this season, out of the 39 quarterbacks that have attempted 50-plus passes.

What does this mean? Well, even when trailing or in neutral situations, Chicago essentially wants to pound the rock as much as humanly possible. And, against a Falcons run defense that ranks 5th-worst by expected points contributed, Justin Fields and David Montgomery should run wild this week.

The Falcons may have a secondary that has performed just as poorly as their run defense. However, when you can run the ball like the Bears, there’s no need to take to the skies. Fields has only attempted more than 23 passes in 2 of 10 games this season. He’s only averaging 20.7 attempts per game, while the Bears lead the league in rush attempts per game.

Chicago’s averages of 36.0 rush attempts, 201.7 rushing yards, and 5.6 yards per carry each rank 1st in the NFL through 10 weeks. And, out of the six highest rushing totals by a team this season, the Bears own four of them.

This stat might even be the most impressive one: The 2022 Bears have 6 games with 200-plus rushing yards, good for the second-most in a season over the last 10 years. They still have seven games to play!

It’s difficult to overstate the success of Chicago’s run game, and that’s contributed to some low passing volume numbers for their 23-year-old quarterback.

The Bears have seemingly been able to run the ball at will in 2022, and things should be no different during their Week 11 showdown in Atlanta.

Chicago’s offense has reached a new level of efficiency since they’ve begun deploying Fields more as a runner in recent weeks. Look for the QB to continue leading the most prolific rushing attack in football as the Bears avoid the passing game yet again this Sunday.

Enjoy playing our NFL Props for Week 11 and Join us for the rest of the NFL season!