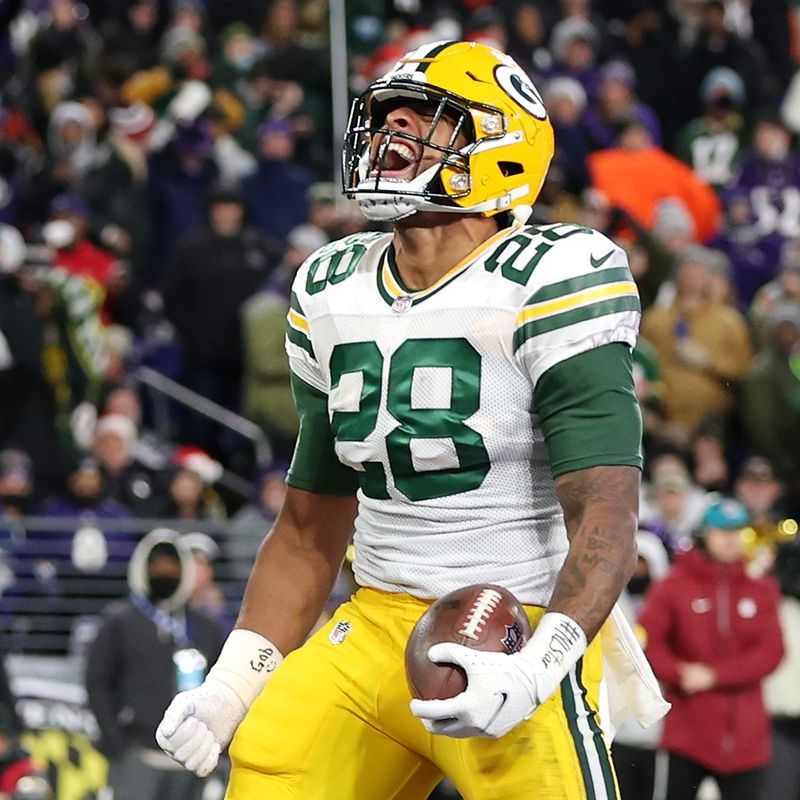 It’s good to be back. Basketball, Baseball, and Hockey are all awesome. College Basketball and College Football are great, too, but, nothing compares to the National Football League. And, we’re so unbelievably close to being back in full swing. As we count down the days to the weekend, we’re bringing you one of our favorite NFL Props for Week 1.

The Green Bay Packers and Minnesota Vikings are squaring off in an NFC North showdown on Sunday afternoon — kickoff is at 4:25 PM ET. Aaron Jones and AJ Dillon form what is arguably the league’s best backfield tandem right now, and they could be in for increased roles to open the 2022 season. After the departure of Davante Adams, we may see Green Bay shift to more of a run-oriented offensive scheme this season, which would greatly benefit the powerful duo of running backs. I love Dillon, in particular, to kick off the season, so let’s jump into the play!

The BTP team already has 9 plays locked in for Week 1 — Join us for the entire season to get all our picks alerted to your device.

AJ Dillon closed the 2021 regular season on a major high note, clearing this line in 8 of his final 10 contests, averaging 57.2 yards per game.

The Boston College product was successful in each of his games against the Vikings in 2021. He turned 11 carries into 53 yards in the Packers’ Week 11 loss to the Vikes. Dillon then carried 14 times for 63 yards in the Pack’s big victory over Minnesota in Week 17. The Vikings’ rush defense should be improved from its awful 2021 performance. However, they shouldn’t transform into a strong unit overnight.

Minnesota was beyond horrible in just about every metric when it came to stopping the run in 2021.

Sure, Green Bay’s rivals added Jordan Hicks in free agency, along with Za’Darius Smith, a former Packer. But, these additions to their linebacking group won’t turn one of the league’s worst defenses against the run into an imposing unit all of a sudden. I still expect the reigning NFC North champs to run all over the Vikings in what projects to be the most run-oriented scheme in the Aaron Rodgers era.

In one of the highest profile moves from an action-packed 2022 offseason, the Packers sent All-Pro WR Davante Adams to the Las Vegas Raiders. As a result, Green Bay’s wide receiver room has been left pretty bare. Allen Lazard is slated to be the team’s new WR1, and he’s yet to even reach 1,500 career receiving yards. But, now Lazard’s status could be in doubt for Week 1 as well, according to Packers beat reporter Tom Silverstein.

A bare-bones wide receiver room could lead to Aaron Rodgers and the Packers running less than in past seasons. Additionally, this could result in Aaron Jones seeing an increase in snaps from the slot or out wide. That would obviously lead to an even larger backfield role for Dillon, which would be excellent news for his rushing outlook.

Overall, a decrease in wide receiver talent to open Green Bay’s season bodes quite well for AJ Dillon. He probably only needs 10 or 11 carries to reach the over here, but I anticipate he sees around 15 rush attempts on Sunday.

AJ Dillon and the new-look Packers offense are in Minnesota to take on a run defense that struggled mightily in 2021. Green Bay could easily end up relying on their RB tandem for a Week 1 divisional matchup that would set their season up for success if they emerge victorious. Look for Dillon to begin his 2022 campaign strong on the road.

Enjoy playing our best NFL Props for Week 1 and Join us for the whole NFL season!