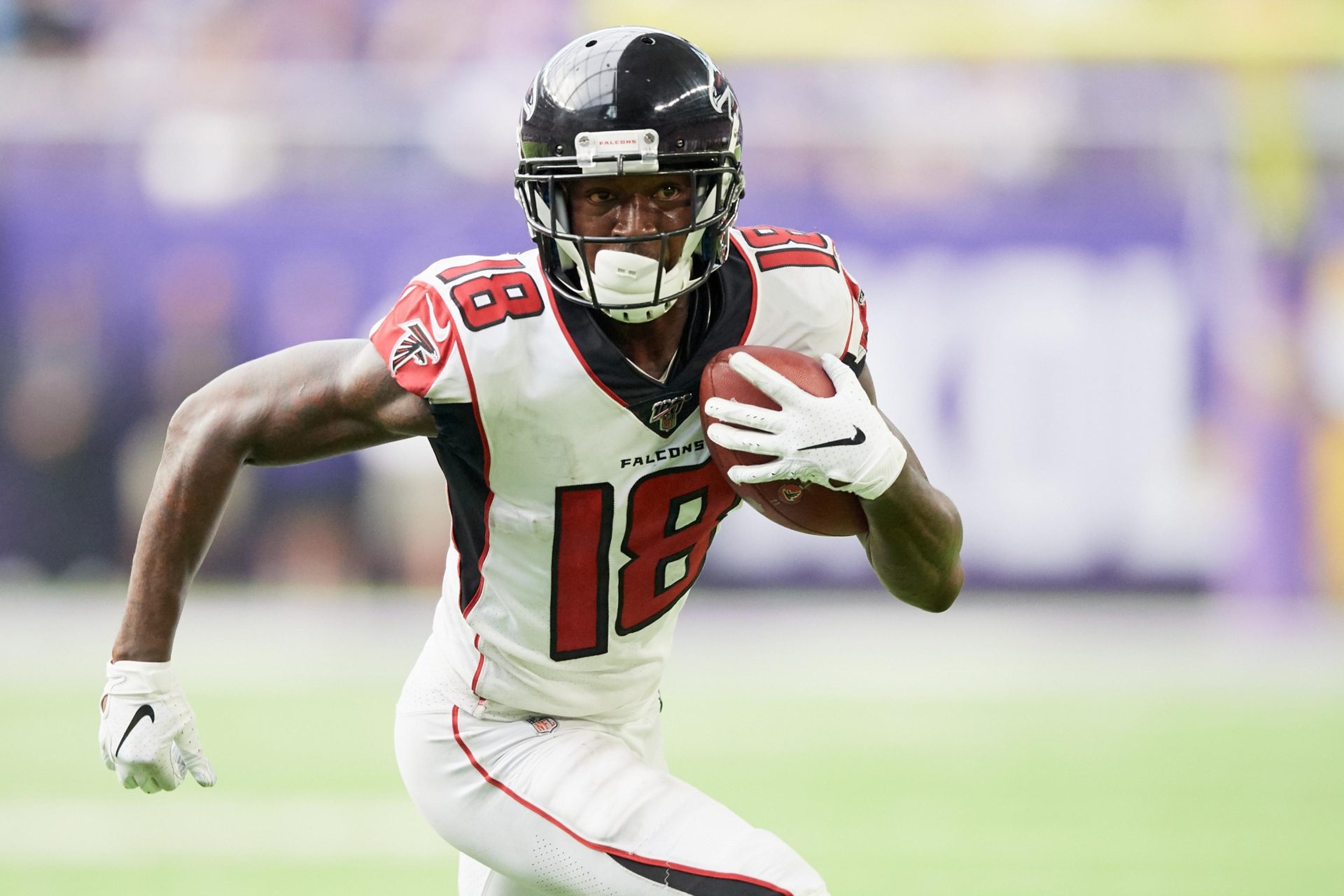 It’s looking more likely by the day that we’ll see a full season of football this fall, allowing us to finally fire on a few season-long NFL player props with confidence that they won’t be canceled, and we start with the prop for most receiving yards.

Let’s key in on young and freaky blue-chip wide receivers whose respective upsides don’t appear to be baked into their current pricing.

First, let’s ask what a receiving-title season look like? Here’s a glance at the numbers for each leader over the last 11 seasons.

We’re going to need at least 155 targets; 153 is the fewest anyone has won a receiving title with, and 170 is the average.

It’s worth noting, however, that things have been flattening out at the WR position, with the alphas doing more sharing than they’re used to. In 2014, there were eight WRs with 155+ targets; last year there was just one.

That suggests that something around 160 targets could be enough to win the receiving title.

Volume is the most important factor, but we’ll need efficiency too. Michael Thomas is the only WR to do win a receiving title with a yards/reception of under 12. In every other year, it took at least 13.2 Y/R.

With that framework in place, let’s look for guys who pair potentially elite volume and efficiency with an irresistible betting price.

Going into last season, bookmakers set the over/under line on D.J. Moore’s receiving yards line between 750-800 yards, which we thought was pretty cute.

As expected, the sophomore obliterated that receiving line, despite catching passes from two quarterbacks who ranked at the bottom of the league in yards per attempt (YPA) Kyle Allen (30th ranked YPA of 6.8) and Cam Newton (41st ranked YPA of 6.4).

In effectively 15 games (he left in the first quarter of their final game with a concussion), Moore finished eighth among all WRs in total yards. Had he been able to stay in that last game and manage even 28 receiving yards, he’d have finished fourth in yards.

Not bad for a guy who was 10th in WR targets and 13th in Air Yards. 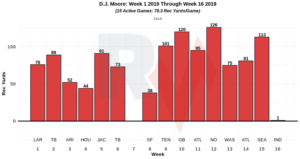 Moore continues to be undervalued by both the betting and fantasy football markets. When adjusted for age, his first two seasons of production put him among a cohort of truly elite WRs. Here is every WR (since 2000) to approach or exceed 2,000 receiving yards before turning 23.

Worried about Teddy Bridgewater? Don’t be. Last year, Michael Thomas put up a 1,630-yard pace in nine games with Bridgewater, and his accuracy will be a huge upgrade over Kyle Allen.

Given Moore’s ascending path and upgrade at QB, it’s not unreasonable to project an efficiency bump on his already-solid average of 13.5 Y/R.

What about volume? Can he improve on his 135 targets from last year?

The Panthers have been open about their intentions to rebuild, and they just lost their best defensive player, Luke Kuechly, to retirement. They’re projected for just 5.5 wins (tied for second-worst) and will be trailing early and often in 2020.

They started to fall apart in the second half of last season, helping Moore to a 171-target pace. 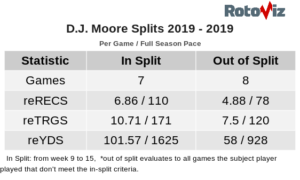 It’s a tiny, hand-picked sample, but a really bad Panthers team, combined with a potential injury to target-machine Christian McCaffrey, provides us a realistic route to a yardage title.

Through Ridley’s first two seasons, he has target totals of 92 and 93, failing to eclipse even 1,000 yards.

He represents the perfect anti-fragile candidate at WR. Perhaps no receiver in the league stands to benefit more from an injury to a player in front of him than Ridley. Julio Jones has averaged 161.2 targets per season over the past five campaigns, and if he goes down, Ridley has the potential to explode.

With Austin Hooper and his 7.5 targets/game now in Cleveland, he should see a volume bump regardless.

We don’t have much of a sample to draw from, but in one career game with Jones inactive, Ridley had 8 receptions on 10 targets for 128 yards.

Should Julio miss significant time, a 10 target/game pace for Ridley is a reasonable projection in an offense that led the league in pass attempts by a wide margin last year (42.8/game).

At 31-years old and with a growing list of ailments, injury analytics site Sports Injury Predictor deems Jones a “High Risk” for a 2020 injury, projecting him for a chunky 3.3 missed games.

The path to a receiving title for Ridley is pretty clear. He’ll need some luck, but not as much as this line of +9000 (1.1% implied probability) suggests.

In the case of the prodigal Smith-Schuster, we don’t need to extend our imagination much. He’s already hit the thresholds we’re looking for; he just needs to put it all together.

If those figures line up a little better this year, a 1,600-yard season is well within his range of outcomes:

You may have spotted him on the table in the D.J. Moore section, and it’s a good reminder of what rare specimen Smith-Schuster is. Since 2000, only one WR has amassed more receiving yards then Smith-Schuster before turning 23 — Josh Gordon, who led the league in receiving as a 22-year old sophomore with 1,646 yards.

He’ll benefit from the return of Ben Roethlisberger, with whom he’s averaged 77.3 yards/game in his career, versus 48.45 with all other QBs, a 46% difference. Roethlisberger’s health is admittedly something of an unknown, but that appears to be baked into this price of +2500.