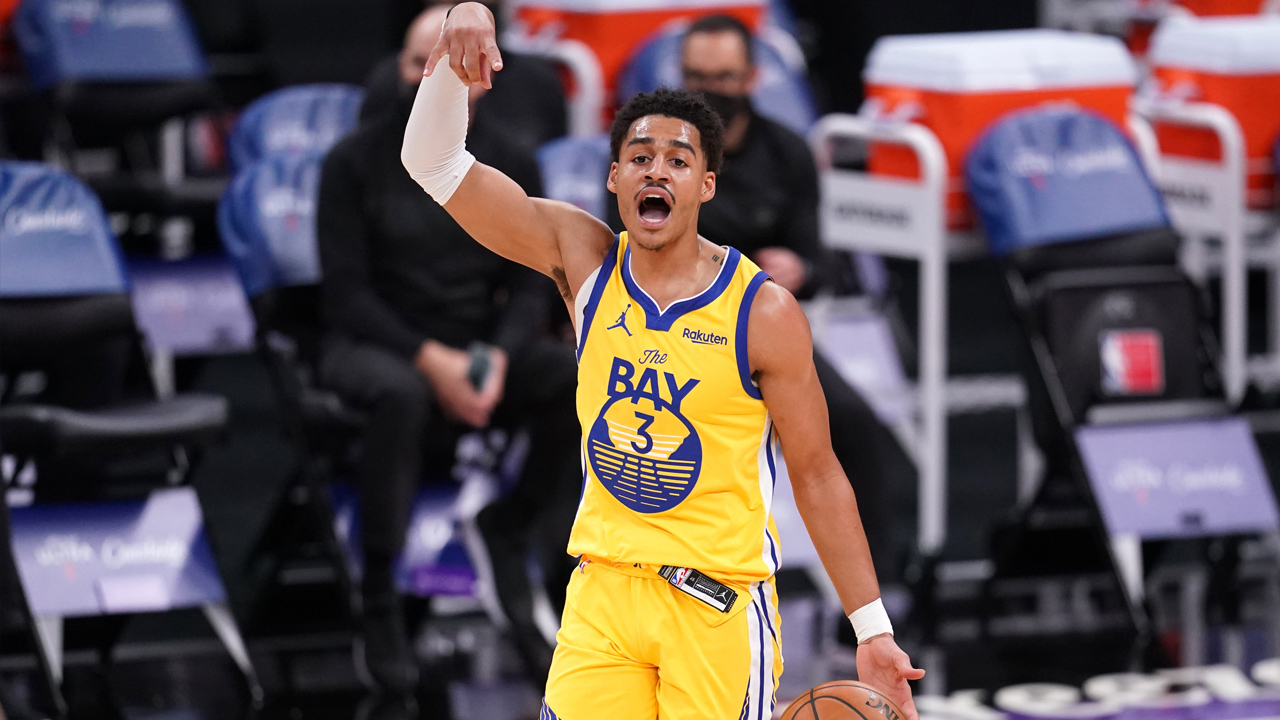 We have a nice 7-game Friday NBA slate lined up this evening, and we’re bringing you two NBA props for tonight.

The Golden State Warriors are visiting the Atlanta Hawks this evening — tipoff is at 7:30 PM ET. Stephen Curry is sidelined for the Warriors, which has freed up a humungous role for Jordan Poole in Golden State’s offense. With plenty of looks and minutes guaranteed for the young guard, he’s in a great spot to make it rain.

Meanwhile, the Philadelphia 76ers’ offense is humming since the addition of James Harden. They’re in Los Angeles to face off against the Clippers tonight — this one tips off at 10:30 PM ET. Tyrese Maxey has been a prime beneficiary of the Harden addition, as he’s become a sharpshooter in more of an off-ball role recently.

We’re expecting a three-point barrage from Poole and Maxey tonight, as the two guards look to stay hot in Friday night’s NBA action.

The Warriors will be without Stephen Curry for another couple of weeks as the season comes to a close, and this benefits Jordan Poole tremendously. Curry’s averaging 19.1 field goal attempts per game (11.7 three-point attempts) in 34.5 minutes per game this season, pumping out a team-high 30.8% Usage Rate.

This is a giant chunk of production now missing from the Warriors’ rotation, which means Poole can now essentially become Steph Curry during his absence. It might sound insane, but I promise I’m not crazy.

When the greatest shooter of all time has been absent this year, Poole has filled his shoes admirably. He’s impersonated Steph about as well as anyone could have hoped, making 4.6 threes on 10.5 attempts per game across an 8-game sample size. And, his 30.0% Usage Rate is right in line with Stephen Curry’s.

Poole has hit at least 4 threes in six of his eight games without Curry during the 2021-22 campaign. Playing time is a key factor for Poole’s volume. He’s all but guaranteed at least 34 minutes tonight, and he’s made at least 4 threes in 12 of his 16 games when seeing 34-plus minutes of action.

However, one advantage the Michigan product has going for him is that he doesn’t see nearly the same defensive attention that Golden State’s two-time MVP does. Poole will function in the Curry role for Golden State tonight without having defenses locked on to him the way they sell out to stop Steph.

The Atlanta Hawks are far from a respectable defensive unit. And, they’re an especially poor perimeter defense. Atlanta is allowing the 5th-highest 3PT% and 9th-most threes made this season. The Hawks also give up the 6th most points to opposing guards.

High-volume shooters have also thrived against the Hawks this season. Of the four players averaging at least 9 three-point attempts this season, they’ve played Atlanta seven times collectively. They hit at least 4 threes in all seven games, averaging 5.4 3PM per game.

With Poole, penciled in for around 35 minutes and 10 looks from deep tonight, I like him to follow suit against one of the league’s weakest perimeter defenses.

Poole has knocked down at least 4 trey-balls in 9 of his last 10 games, averaging 4.8 threes during this stretch. He’s leading the entire league in threes made during this stretch and has a great opportunity to continue his hot streak against the Hawks.

Tyrese Maxey has seen more success in an off-ball role dating back to his time playing for the Kentucky Wildcats. After acquiring James Harden in a blockbuster trade, Philly has created the perfect environment for Maxey to thrive.

Maxey has seen increases in efficiency alongside Harden while still seeing the same volume and playing time he did on the pre-Harden Sixers. The largest change, however, has been his proficiency from beyond the arc.

Maxey has knocked down multiple threes in 10 of his 12 games with James Harden, averaging 2.4 threes per game.

Maxey has also hit multiple threes in 12 of 14 games since All-Star weekend. And, he’s attempting over five per game during this stretch.

The second-year pro has been impressive enough to put his name in the Most Improved conversation, averaging 17.5 PPG while shooting 41.7% from three on the year.

Tyrese went 3/6 from downtown last game against the Clippers, and we’re getting terrific value on him to convert a pair of threes tonight.

Jordan Poole and Tyrese Maxey headline this edition of our Friday night NBA props. The books are undervaluing their three-point shooting presence and I love each of these spots given their roles this evening.