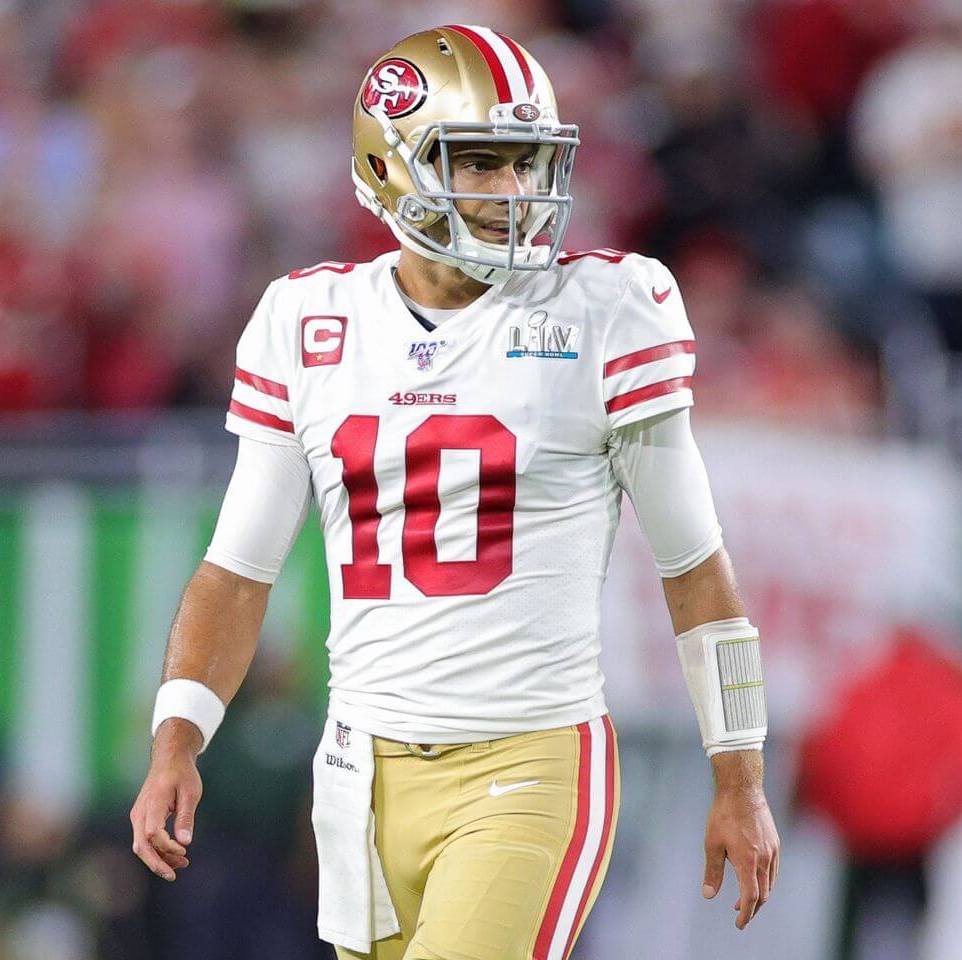 The San Francisco 49ers and the Los Angeles Rams have supplied us with one of the NFL’s best divisional rivalries over the last couple of years. Jimmy Garoppolo could be under siege tonight, so we’re locking in on him as one of our favorite Monday Night Football props this evening.

Garoppolo is back as San Francisco’s starting quarterback after Trey Lance suffered a season-ending injury in Week 2. And, he looked as jumpy as ever in a Sunday Night Football loss to the Denver Broncos last week. The Niners’ offensive line is in bad shape, and they’re going up against a Rams’ defensive front that has been one of the NFL’s best. So, don’t be surprised if Jimmy gets jumpy again tonight.

Jimmy Garoppolo has had some success with head coach Kyle Shanahan‘s system over the years. However, when he looks terrible, he looks terrible. And, last Sunday was one of those types of games for the 30-year-old passer.

San Francisco only scored 10 points in his first start of 2022. The poor performance was highlighted by a self-inflicted safety where the quarterback stepped out of the back of the endzone. After this blunder, Jimmy G threw the ball right to the Broncos as he was attempting to lead a game-winning drive. He’s led the Niners to multiple NFC conference championship appearances, but interceptions are nothing new for Tom Brady‘s former backup.

Garoppolo has thrown an interception in 12 of his 19 starts since 2021, including last year’s postseason run. This is right in line with his 2019 performance, where he threw an interception in (you guessed it) 12 of 19 starts. He’s now given the ball away through the air in 33 of his 52 total starts since arriving in San Francisco, good for a 63.5% hit rate on this prop.

And, in games where Garoppolo has thrown at least 25 passes, this looks even better. He’s attempted 25-plus passes in 14 games since 2021 and has thrown a pick in 10 of them.

Since 2019, 25 quarterbacks have thrown at least 1,000 passes — only two have thrown an interception on a higher percentage of their passes than Garoppolo has. Those men are Sam Darnold and Baker Mayfield.

Garoppolo has been one of the league’s most turnover-prone QBs over the last few years. And, with the Rams in town tonight, this is a tough matchup for Jimmy to secure the ball in.

Furthermore, San Francisco is missing their best offensive lineman tonight. Niners All-Pro left tackle Trent Williams will be absent from the lineup tonight, which is quite damaging to the team’s offense. The Rams have one of the best pass rushes in football and will now face one of the worst lines Garoppolo has played behind under Kyle Shanahan.

Jimmy G has only played a pair of games without Williams over the last few seasons. He threw multiple interceptions in both of them. And, his monumental turnover last week came after Williams left the game. San Francisco’s offense is super banged up, and that does not bode well for Garoppolo’s ball security.

The Rams have intercepted a pass in 17 of 24 games over the last two seasons and they have the fourth-most INTs of any team during this stretch.

With Garoppolo’s best blocker inactive, look for him to continue adding to this turnover trend on MNF.

Enjoy playing our best Monday Night Football Props for Week 4 and Join us for the rest of the NFL season!