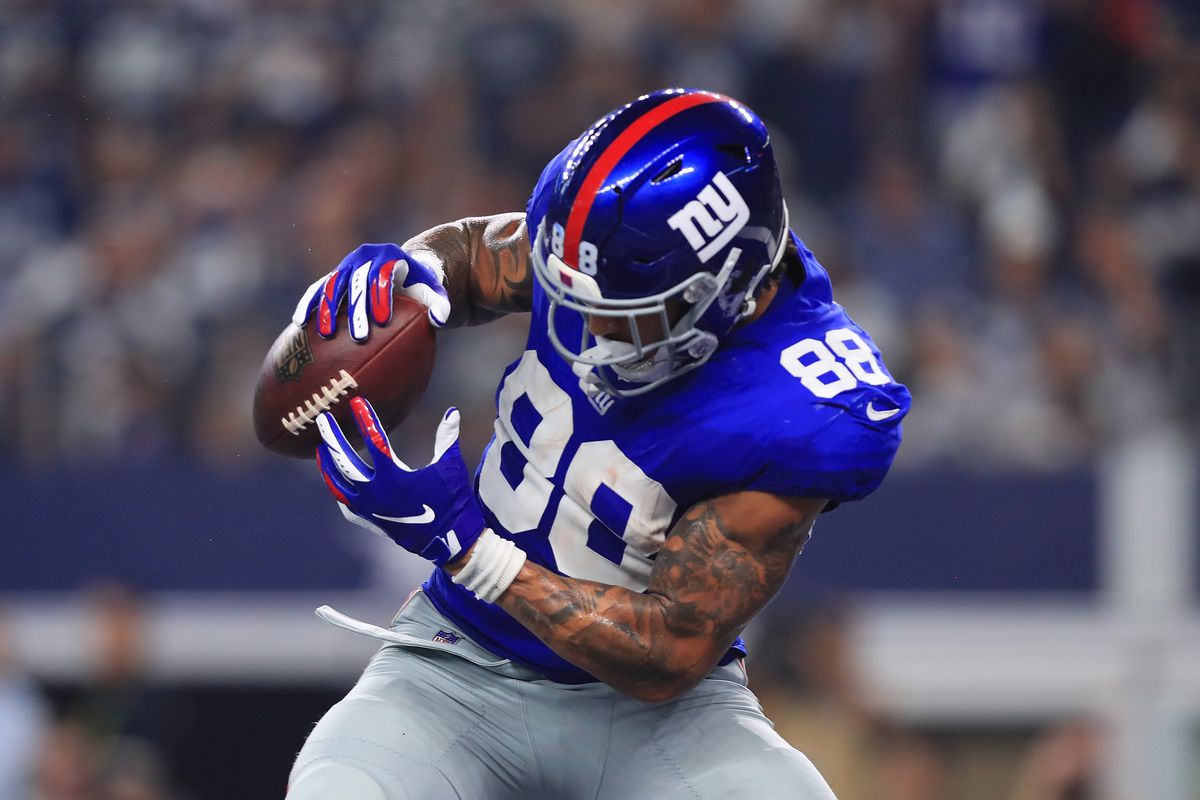 Our best MNF props for Bucs Giants key in on Evan Engram and what could be a declining role in a Giants offense that’s finally getting healthier.

He’s our best play for tonight and we’re confident enough in the angle to make it an “official” play for one unit. Of course, we’re pumping out 15-20 props per week for our subscribers, so be sure to join us to get them all.

We’re coming off a tough, late loss on SNF, so we turn to Engram to finish out the week on a winning note.

Note: We released this for our subscribers at U37.5 when it opened but still like it down to 34.5. Join the team to make sure you’re always getting the best numbers possible.

This is a pretty standard line for Engram – his average yardage prop over/under on the year is 35.3 – but he looks to be facing more target competition than he has at any point so far this year.

Kenny Golladay, Darius Slayton, and Kadarius Toney are all healthy coming out of the bye, marking the rare occasion when the Giants have had so many healthy pass catchers. It would be better if Sterling Shepard were back too, but Toney should command plenty of those slot looks in his spot regardless.

Oh, and it sounds like Saquon Barkley has a chance to play tonight, too, and he’s commanded 4.8 targets per game when healthy.

Not only does Engram has plenty of competition for targets from a deep WR core, but he was also even out-targeted by “backup” TE Kyle Rudolph last week, 5 to 3. He did still manage to hit this number on those meager three targets, marking just the third time in seven games he’s gone over. 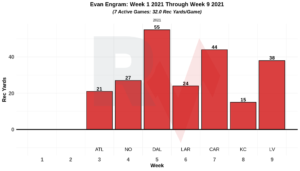 However, that kind of efficiency from Engram is rare. He’s averaging a poor 1.14 Yards Per Route Run, which ranks 55th among all TEs. His 6.2 yards per target ranks 62nd.

Engram doesn’t have much target upside, and when he does get them, he’s not doing much with them. His “boom” game here is about 45-60 yards, but the “bust” outcomes just make up such a fat part of his distribution. 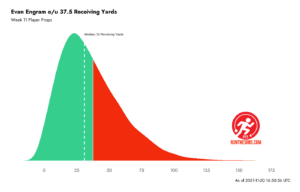 The Buccaneers are not as bad vs TEs as you’d think, given that they have one of the heaviest pass-funnel defenses in the league.

Devin White is a stud linebacker and has helped them to hold opposing TEs to 6.4 YPT (8th best) and a 61.5% under rate on TE Receiving Yards props.

While five different TEs have hit this number against Tampa this year, they all needed 5+ targets to get there, a figure that will be difficult for Engram to hit with so much target competition. And even if he does get more looks than expected, we could still get there on (in)efficiency.

We don’t think this line is adjusted enough for all the bodies that the Giants have back, plus the fact that Engram may now even be behind Kyle Rudolph on the TE pecking order.