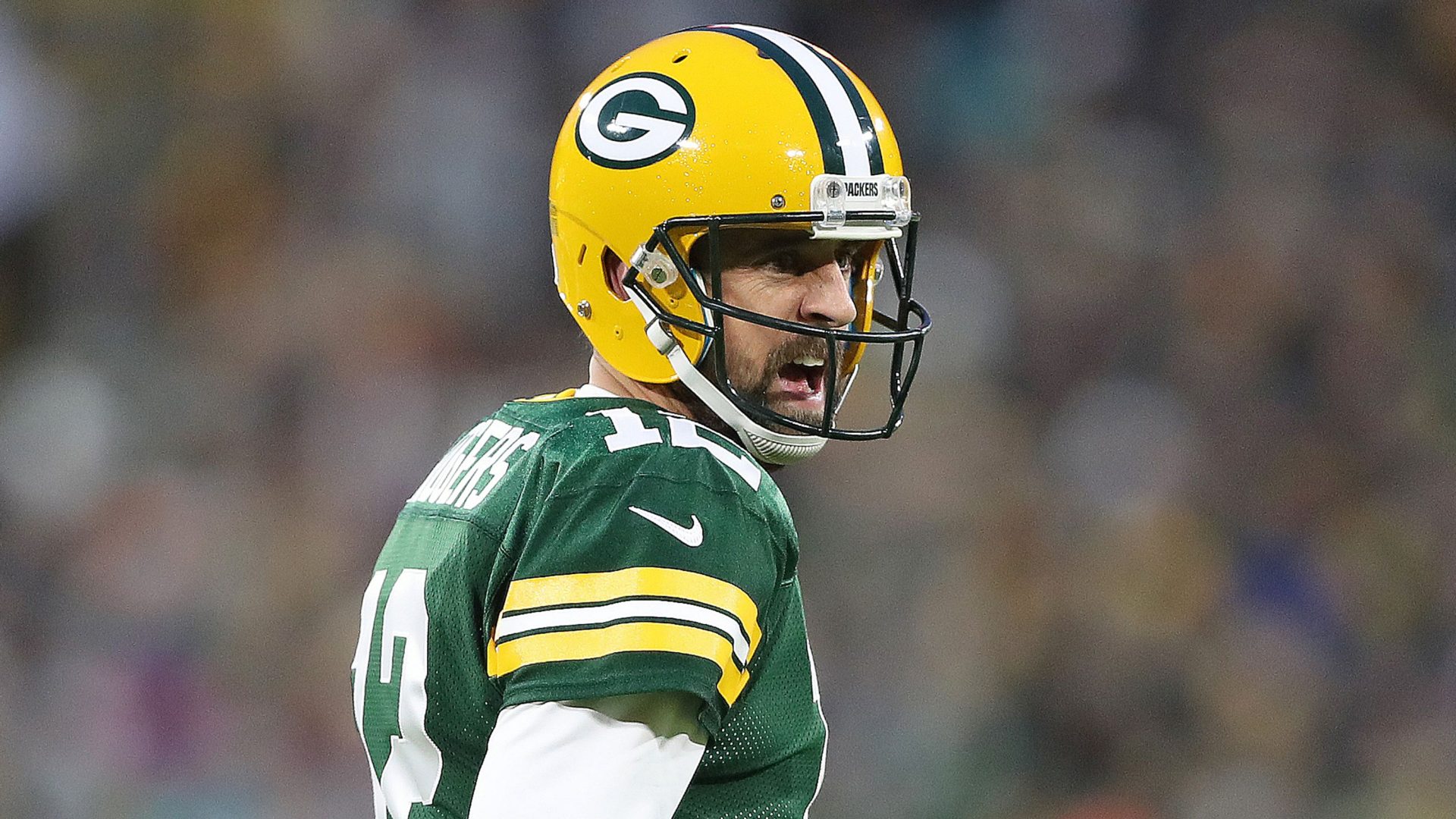 You won’t find us betting a lot of team win totals on these pages – we much prefer the player props – but we had to make an exception when we saw the line on the Green Bay Packers win total for 2019.

Several books have set the number at 9.5 wins with -130 vig on the under. Theirs is one of a few team win totals that seem slightly off in 2019, which is no surprise considering football fans generally like betting overs, skewing the lines a little.

Not us. We love sweating a good under, and this Packers total us no exception.

The Packers are coming off a 6-9-1 season in which Aaron Rodgers played all 17 games but probably wasn’t at 100% for much of it. In the preceding year — a 7-win season in which Rodgers only played in 7 games.

Before that, Green Bay won at least 10 games in seven of the past eight seasons, but the recent failures – with and without the franchise QB on the field – led to the dismissal of head coach Mike McCarthy, who was replaced by Titans offensive coordinator Matt LeFleur.

All that is enough to apparently give oddsmakers a warm and fuzzy feeling about the Pack bouncing back to double-digit wins in 2018. I’m less confident.

Are the Packers a 10-win team with a Rodgers?

There’s no doubt he makes the offense much better, but even when he’s playing, Green Bay has been pretty close to a .500 team, theoretically. Using the RotoViz Team Splits app, it turns out that over a pretty large sample of 39 games in the last three years, Rodgers averages 8.3 Pythagorean expected wins per season. 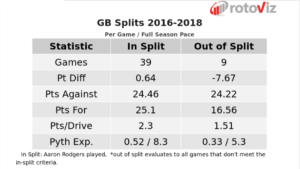 That’s much better than the 5.3 expected wins they average without him, but still a full 1.2 wins short of our over/under total for 2019.

Does their schedule provide any reason to think they’ll outperform that expectation this year?

According to Sharp Football, which uses Vegas win totals to determine strength of schedule, the Packers’ have a neutral schedule in 2019, pretty much exactly middle of the pack. 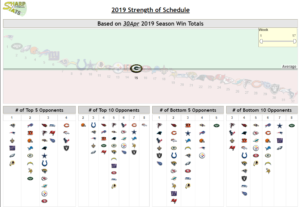 Yes, a pair of matchups with the Lions look good on paper, but the Packers have lost four of their last five to Detroit.

They also get the NFC East and AFC West this year, which bring matchups with the Chiefs, Chargers, Cowboys, and Eagles, who averaged 10.8 wins between them last year. Add to that a pair of dates with the 12-win Bears.

Is Matt LaFleur an Upgrade?

Mike McCarthy took a lot of heat of trotting out a rigid and antiquated offense in recent years, and it was ultimately his undoing.

Matt LaFleur has some of that Sean McVay shine on him from the one season as the Rams offensive coordinator, which ultimately led to the coordinator job in Tennesee last year.

It’s tough to take too much away from that one year in the Music City, but none of it was positive. Under LaFleur last year, the Titans were:

For the most part, those rankings were actually slightly worse part than the year before. So not only did LaFleur not move the offensive needle, it could be argued that he actually dragged them down.

At best, the coaching change is a neutral one for the Packers based on what we’ve seen from LaFleur.

This line of 9.5 appears to be a case of a public team getting a public bump. There’s nothing in the numbers to suggest the Packers are suddenly going to morph into the Packers of old.

I’d also bet the under on 9 wins, but if you shop around you should be able to still find the 9.5 number.