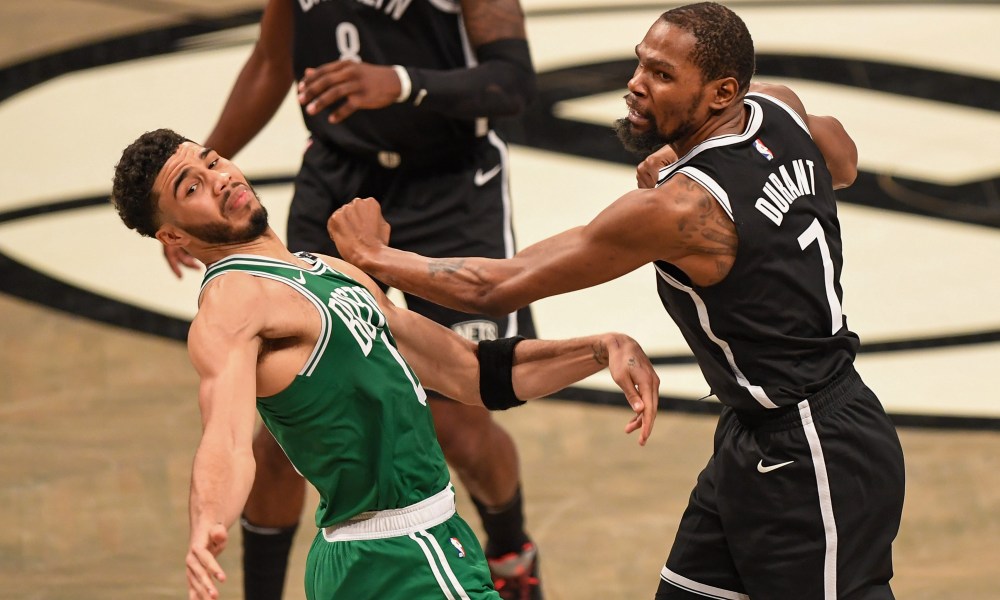 The NBA Playoffs roll on with a series that’s been a mismatch so far, as we break down one of the best Celtics Nets props for Game 3.

Boston has strumbled into must-win territory versus the Nets. While the expectation is that they’ll rely on Tatum for production, I’m going full contrarian on his PRA line tonight.

Line available at publishing.  Playable down to under 40.5.

It’s never a comfortable feeling to fade a team’s best player in a must-win playoff game, but here we are. After a tremendous regular season in which Tatum averaged 38.1 PRA, his production and efficiency have come to a screeching halt in the playoffs.

In the regular season, the Duke product averaged 0.98 PRA per minute. Through two playoff games, Tatum’s PRA per minute production is down 27%. Small sample size? Yes, but there are some prevailing trends that should keep the All-Star at bay in Game 3.

Can he Score on KD?

For all of the deserved praise he gets for his offense, Kevin Durant is reminding the basketball world that he’s also a terrific on-ball defender. The Slim Reaper has been tasked with stopping Tatum on almost half of his offensive possessions. Versus Durant, Tatum has only been able to muster six points in more than 38 minutes of partial possessions.

Just 25% of Tatum’s shot attempts in the playoffs have been considered open – down from 47% in the regular season. The Nets defense has held Tatum to just 28% shooting thus far.

Tatum also did suffer an eye injury in Game 2 that limited him to only 21 minutes. While he’s expected to receive his full workload tonight, there are reports of continued discomfort. Maybe it’s nothing, but any discomfort or disruption to his vision can only help our under position.

Not Rebounding or Passing Either

Tatum has only registered a combined 13 rebounds and assists over the two games. However, digging into the advanced numbers, he might be due for regression.

The ball-dominant forward’s six assists have come on just eight potential assists, 75% conversion rate that is well above his regular-season average of 51%.

Meanwhile, the combination of the Nets’ strong offense and Tatum’s defensive responsibilities have combined to limit his rebounding opportunities. His six rebounding chances per game also sit well below his regular-season average of 11.

It’s a tough draw for the fourth-year pro in all three stat categories.

The Nets have outscored the Celtics by 39 points in 72 minutes. Even with Game 3 shifting to Boston, the Nets have found their groove, and there is a strong possibility they run away with this game, again.

My projections for Tatum’s PRA are in the mid-30s.