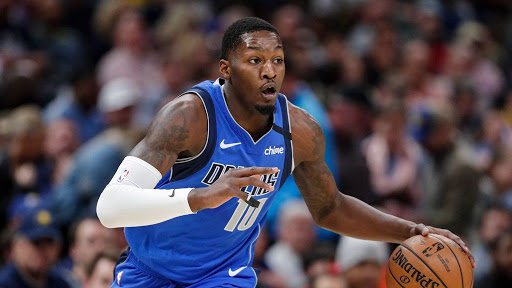 We’re officially halfway through the NBA season, and we kick things off with a look at this Dorian Finney Smith prop — O/U 8.5 points. We’ve got only two games on the schedule tonight and I’ve got my sights set on two bitter division rivals in what projects to be a tightly contested game.

Let’s kick off the second half with some spice. Finney-Smith has been struggling of late, and I like that trend to continue in what looks like could be a low-scoring game between two familiar foes.

MORE PROPS: Check out the 8 craziest prop facts from the NBA’s first half.

Editor’s note: We’re hitting our NBA prop bets this year at 61.8% for a profit of +38.18 units. Come join our Premium Slack community today for daily picks in NBA, MLB, NFL, and more!

The versatile forward has struggled recently, failing to score more than six points in five of his last six games, while averaging 5.3. Finney-Smith has put up double-digit shot attempts just once in that same span.

The Mavericks rely on Smith primarily for his defensive prowess, and this is evidenced by him routinely defending the opposing team’s best wing player. With the Mavericks fully healthy for the first time all season, look for the fifth-year man out of Florida to keep deferring to his teammates more, making a double-digit field goal night unlikely.

Finney-Smith will square off against a Spurs team that ranks 10th overall in defensive efficiency.

Dating back to February 3rd, the former Gator has five games where he’s scored double-digit points, with all five teams ranking in the bottom-10 in team defensive efficiency.

With San Antonio ranking 14th in pace combined with Dallas checking in at 22nd, this has the makings of a sluggish game with points hard to come by.

Given those pace concerns, it’s already going to be an uphill battle, and when you add in the fact that the Mavs are finally fully healthy, I think Finny-Smith will be hard-pressed to find the attempts.