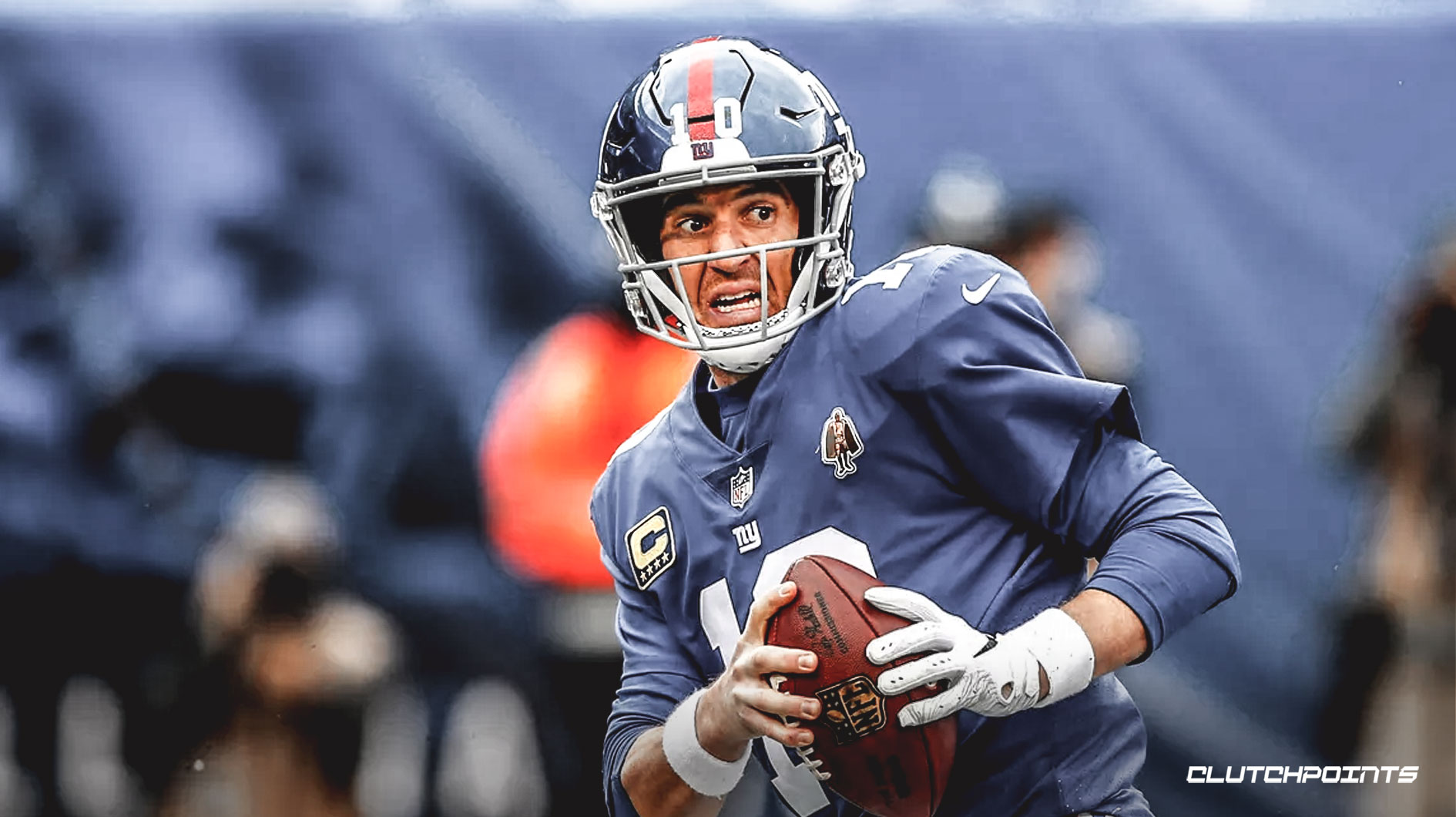 As we look at the best week 16 QB prop bets, we turn an eye to the point-spread market.

The efficiency of this market makes big spreads a great predictor of game flow, and thus a prime starting point for attacking the prop betting market. QBs are usually the position that is most affected by game script and play-calling splits, so let’s dive in to see which spreads we can use to exploit the QB prop betting market in the Week 16 main slate.

For the rest of Week 16’s main slate, check our our top prop bets here, and Sunday night’s card is also ready for your perusal.

The Giants are 10-point road dogs versus the surging Colts. Eli stinks and is without star receiver Odell Beckham Jr, but everything points to Eli throwing the ball more than 34 times in this matchup.

Beckham’s absence does negatively impact this wager, as Eli has averaged 2.5 fewer attempts without Beckham since Beckham joined the league. 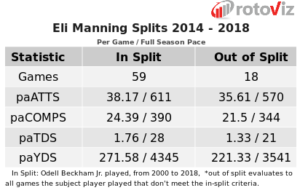 However, whether Saquon Barkley’s passing game utilization has impacted this, or it is just another example of the direction the NFL is going, the Giants are passing at a higher rate than they did in the prior four years at nearly 65%, compared to 61% in 2017, 2016, and 2015, and 59% in 2014.

Expect the Giants to get crushed and Eli to chuck the ball – likely unsuccessfully – more than 34 times.

The Browns come into this game having won four of their last five games by an average of 8.5 points. This week, they are slotted as massive 10-point home favorites over the floundering Bengals.

The Browns’ play calling is extremely polarized based off game script.

Extending the split to games won convincingly by four points or more (instead of just any margin of victory) further accentuates the polarity in play calling.

In their four victories over their last five games, Cleveland has averaged just 25 pass attempts compared to 28 rush attempts for a 47% pass tendency, choosing to lean on Nick Chubb instead of Mayfield when ahead.

Mayfield’s highest attempt total over this span was 31 last week in a sloppy one-point win over the Broncos.

As 10-point home favorites this week over the Jeff Driskel-led Bengals, the Browns should be in control throughout.

Mayfield’s squad has played at a blistering pace over their last four victories.

Cleveland has one of the lowest time of possession percentages in the league and allows the most opponent plays per game. Notably, despite large win margins and general domination over their recent opponents, Cleveland trailed in time of possession by a wide margin in three of these four wins.

Over this span, Browns’ opponents have averaged an absurd 47 pass attempts to just 18.5 rush attempts. 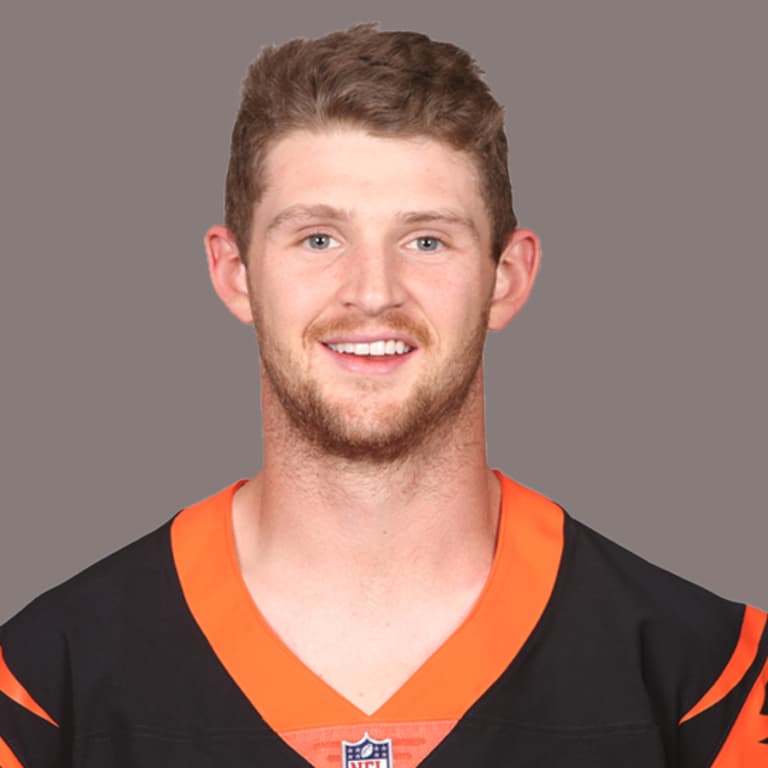 Since Driskel entered the field in Week 11, the Bengals have pass attempts totals of: 46, 38, 27, and 33, with the only low 27 mark coming versus the anemically-paced Chargers.

There is reason for concern with a decimated receiving corps that has lost both Tyler Boyd and A.J. Green, but Driskel’s low 7.6 average depth of target can still dink-and-dunk up the field to the eclectic collection of remaining Bengals’ pass-catchers.

The projected game script and the Browns’ pace make this a clear over.

Darnold has come out of his shell since returning from injury, largely thanks to a burgeoning connection with talented Robby Anderson.

Green Bay has allowed more than 213 yards in eight of their last nine games, with the only blip coming versus the pitiable Cardinals.

There are few angles that go into this bet. Unlike the other tips in this piece, the near-even spread does not push this either way. The yardage line simply has not yet adjusted for Darnold having progressed to a starting-caliber quarterback. 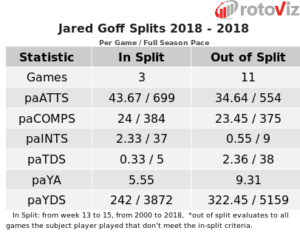 Goff’s reduced production makes sense given that he has one of the lowest yards per attempt when under pressure at just 3.95. This mark ranks fourth worst in the entire league.

In contrast, Goff has the third-best yards per attempt in the league out of a clean pocket at 9.06. 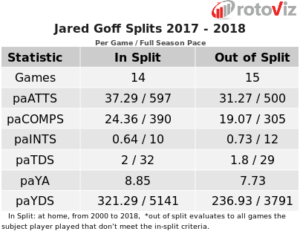 Arizona also cedes the ninth-fewest pass attempts per game and the fifth lowest yards per attempt.

Even if Gurley sits, signals point to this matchup being a low volume and low efficiency outing for Goff as a 14.5 point favorite.

I would play this up to 130 juice but would shy away if the yardage line drops.