When healthy, Johnson’s been a reliable target for both Big Ben and for player props. I like his spot this week versus a weak Jacksonville defense, and I’m going to tell you how to play it.

We’re off to a hot start on Week 11 Props; I went 2-0 on my Twitter picks, while Bet the Prop handed out a TNF winner, too. Join the team here.

Let’s stay hot with this play on the Steelers sophomore stud.

Johnson is averaging 8.1 targets per game, good for 14th at WR.  However, when you remove Weeks 3 and 5, when he was injured and left the game, this number spikes to 10.3 targets, which would be good for second in the NFL.

He’s eclipsed 10 targets in five of those six healthy games, with the one miss coming versus the Ravens’ stout secondary. 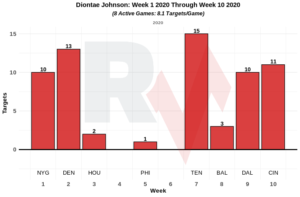 In those six games where he played at least a 75% snap share, his target share is a robust 26%, and he’s converted each target into 6.9 yards.

Removing the Ravens game from the equation, these numbers jump to 28% target share and 7.2 yards per target. For reference, that’s the same share as Stefon Diggs, who is currently fourth in the league in that category.

Through his six full games, Johnson eclipsed 57 yards in five of those, and he’s posted at least 77 yards in four of his last five.

Johnson’s matchup versus Jacksonville is fantastic.

The Jaguars are allowing 9.8 yards per wide receiver target this season, most in the NFL.  On top of that, they just placed one of their starting cornerbacks, rookie CJ Henderson on injured reserve.  Henderson was allowing a more manageable 8.3 yards per target, and his loss shifts Johnson’s matchup to either Tre Herndon or Sidney Jones.

Johnson is averaging 8.6 yards of depth per target (aDOT).  Here’s how WRs with a similar profile have fared against the Jaguars this year:

In total, the Jaguars have allowed 15 different players to eclipse 57 receiving yards in 10 games.  Except for Adams, all the above eclipsed their per game average versus the soft Jacksonville secondary.

Roethlisberger’s total for passing attempts is 37, which is right in line with his season average.  Just with these raw numbers, Johnson is looking at 9.6 targets – and with his 6.9 target conversion rate, he can be projected at 66 yards.

If you strip out the Baltimore game, his projection jumps to 75 yards.  And, if you factor in the plus matchup, that number jumps again to 90 yards.

Any way you look at it, this lines up as a nice spot for Johnson.