Smith headlines our look at the best TNF props for tonight, and we’re hoping that this is the last headline he’ll make this week.

A nice, quiet game from the fourth-year TE would be an extension of a recent trend and a good start to our Week 10 betting card. Enjoy this pick for free, and join us here to get access to our full, weekly betting cards.

Note: Some books are also laying U2.5 receptions in the +120 range. We also like that play but would size down the bet. Betting the under on yardage is a less-desirable angle given Smith’s big-play ability.

While he remains one of the best in the position at generating yards after the catch, opportunities to create anything at all have been limited of late.

He has no injuries that we know of, and yet the targets have fallen off a cliff, failing to crest even four looks in any of his last four games. 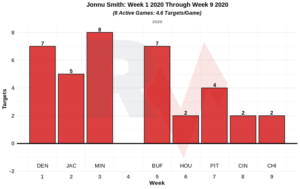 Even in the Steelers game where he had four targets, he only caught one of them, putting him under this number in four-straight games. The routes are disappearing too, having not topped 21 since Week 3.

I’m wary of being fooled by recency bias here since there’s no good explanation for why the Titans would stop targetting one of their best playmakers. But the drop-off is steep enough that it can’t be ignored.

The return and effective play of Corey Davis is certainly a factor. He’s commanded 23 targets in his three games off of injury, and of course, they need to keep feeding superstar sophomore AJ Brown in addition to the big dog, Derrick Henry.

Smith has some spike weeks in his future, but it’ll be tough against the Colts.

The Colts matchup is about as tough as it gets, particularly for TEs.

They’re only allowing four targets per game to the position, and don’t forget that fellow TE Anthony Firkser is commanding 3.9 targets per game alone. This has basically turned into a timeshare, with Firkser and Smith even at 24 receptions each on the season.

There’s not much volume to go around against the Colts, and we’ve seen Smith’s share all but disappear. The former is subject to change at any time, but the latter gives us increased confidence in this play even if that does happen.

Smith is going to push at three here plenty, but he’s got more 0, 1, & 2 receptions in his range than 4-plus, making this a plus-EV play in the long run.