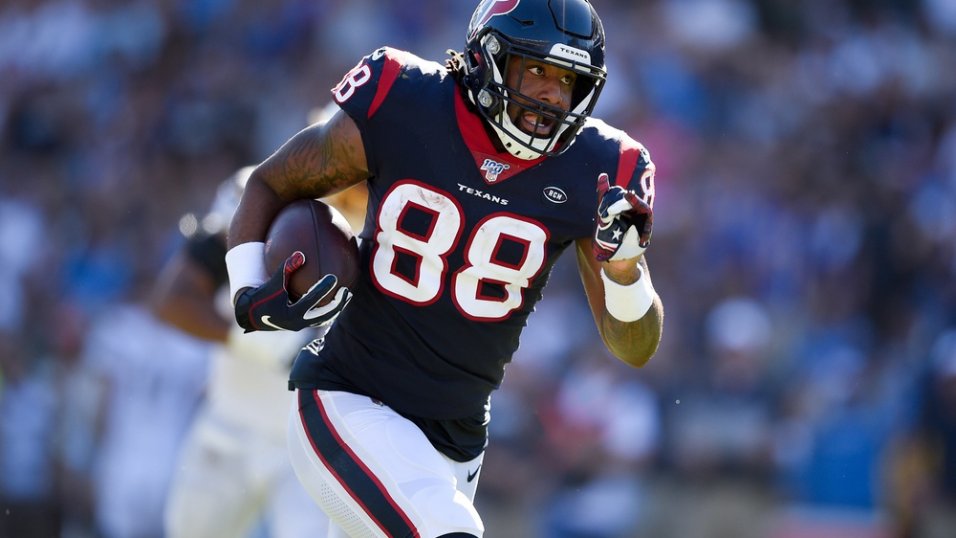 There is hidden value in Akins’ line this week, as we identify the best Thanksgiving props for Texans Lions. He’s one of Deshaun Watson’s main targets in the passing game when he’s on the field.

Fully healed from both his concussion and ankle injuries, I like him to stay hot this week after a big day last game versus the Patriots.

We’ve handed out a string of free winners in this spave, including my best Week 11 play, plus two straight in primetime.

Akins is averaging 39 yards per game this season, hitting over 25.5 in five of his seven.

One miss was his first game back from injury (in a reduced role), and the other miss was the wind game versus the Browns. 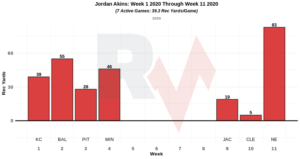 Prior to his Week 4 injury, he was running a route on more than 85% of Watson’s drop-backs. In his three games since returning, the Texans have eased him back in, with Akins running a route on 65% of Watson’s drop-backs last week.  He notched a career-high in yards (83), so it’s safe to assume that his role will either increase or remain about the same against the Lions.

With a target share of 16% (18% if you exclude the dreaded wind game), Akins is getting volume and making the most of it.

At first glance, the matchup does not look ideal.

The Lions have allowed the second-fewest catches and yards to tight ends in the NFL (3.3 catches for 34 yards per game), but these numbers may not tell the whole story.

Amongst their opposition this season has been the Panthers and Cardinals (bottom four in the NFL in TE targets), the Saints without Jared Cook, and the Jaguars who lost Tyler Eifert early in the game to injury.  Stripping those games out of the equation, we see some tangible tight end usage from Lions opponents, similarly profiled to Akins:

At the end of the day, this figures to be a plus matchup for Akins and a Texans team that utilizes their tight ends.

Let’s assume 35 pass attempts for Watson. That’s right at his season average, though it’s notable that his attempts line is set at O/U 38.5.

Assuming Akins runs a route on 65% of those attempts, that projects 25 routes run.  With Akins being targeted every 6 routes, that has him at 4 targets; and with his target conversion rate of 10.6, that would project to 42 yards.  None of this factors in the upside of potentially increased snaps post-injury, the lack of Houston’s run game, and the injury to slot-receiver Randall Cobb.

All in all, I’m super thankful that the books set this line so low for us. I really see Akins stuffing the staff sheet (I’ll see myself out).