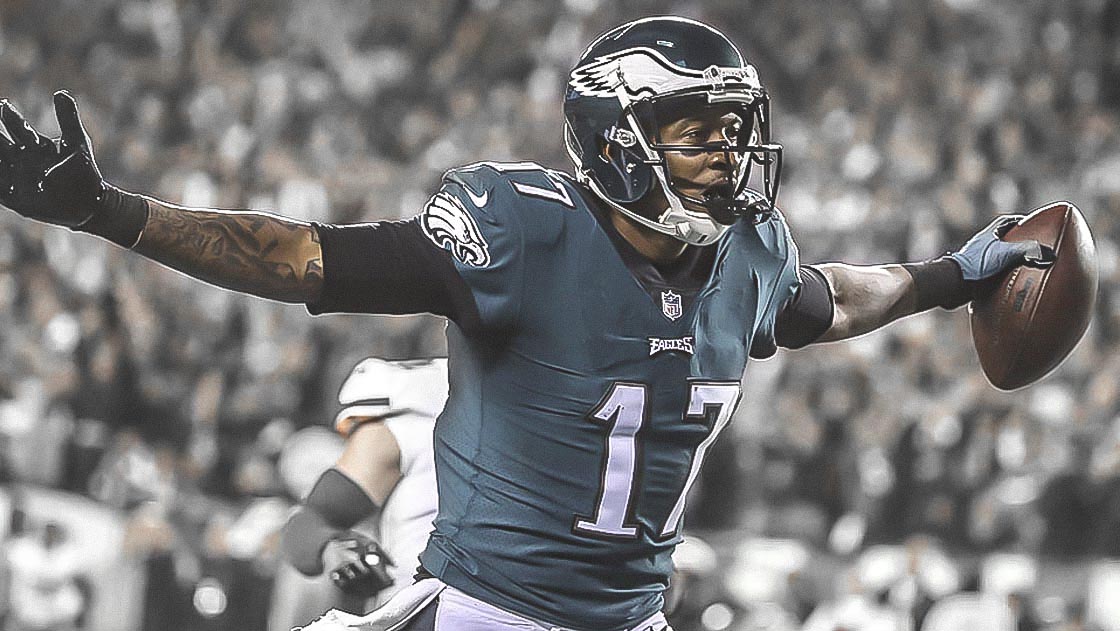 We’re back breaking down the best NFL player prop bets for the Saints versus Eagles, the final game of Divisional Weekend.

New Orleans is pegged as an eight-point favorite over the Nick Foles -led Eagles. There was no contest when the Saints sledgehammered the Eagles 48 – 7 in Week 11, but expect things to remain closer than that this time.

Also be sure to check out our best Monkey Knife Fight picks for this game.

Jeffrey has been incredible with Nick Foles at the helm the last four games.

Passing volume expectations are elevated in a matchup where the Eagles are installed as eight-point dogs to the Saints.

The Eagles throw the ball more in losses and will be particularly incentivized to air it out versus a Saints defense that profiles similarly to that of the Texans, versus whom Foles threw the ball 49 times compared to 22 rush attempts.

Alshon saw his worst game of his stretch with Foles versus Houston, but that was because Zach Ertz was busy exposing the Texans’ league-worst tight end defense for 12 catches on 16 targets.

The difference in this defensive matchup is that the Saints are the best defense in the league versus the TE and swallowed Ertz up for just two catches on three targets when they last met.

The overall pass tendency and above-average efficiency will be there again, but expect Alshon to be the primary beneficiary this time, not Ertz.

I would play the over on this line up to five receptions but would look to the yardage props available if the receptions line hits 5.5 or the juice grows too big.

The Saints averaged a massive 32 rush attempts in the thirteen games they won this year.

Ingram’s share of that has been quite healthy and has translated to him crushing the 41.5 yardage mark on average.

He has surpassed 41.5 yards in eight of ten wins this year.

A cause for concern is that Philadelphia’s depleted secondary has invited teams to turn to the air – the Eagles have allowed the second-most pass attempts and the highest pass percentage in the league.

Nevertheless, the discrepancy between this line and Ingram’s baseline projection in a big win is too large to ignore. And although teams have trended towards the pass, Philadelphia is middle of the pack in terms of yards per carry allowed (4.6 YPC – 20th).

Ingram to score a rushing TD at +215 on 5Dimes also presents value, as well, as Ingram has averaged 0.71 rushing touchdowns per game in Saints’ wins by five-plus points this year.

I would play this up to 44.5 yards but would shy away if the juice or line grow too high.

Ginn has crushed this line in the three games he has played this year.

Also working in speedster Ginn’s favor are his splits inside the Superdome the last two years.

Ginn has been a high variance player throughout his career but saw eight targets in Week 16 after returning from injury and should be heavily favored to hit 50 yards at home versus Philadelphia.